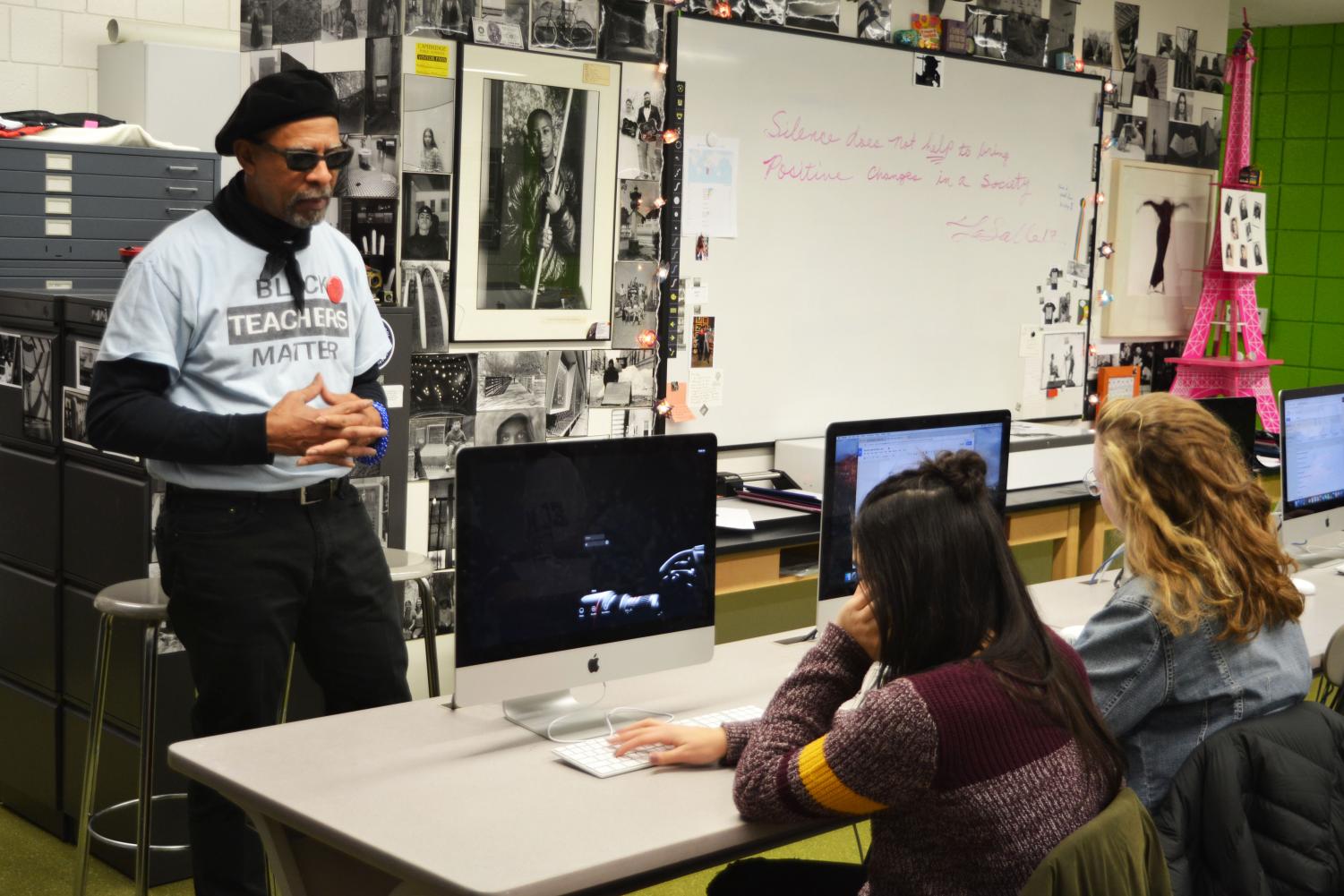 Pictured: Archy LaSalle teaching Photo 1; the board reads, “Silence does not help to bring positive change in a society.” (Grace Ramsdell)

Pictured: Archy LaSalle teaching Photo 1; the board reads, “Silence does not help to bring positive change in a society.”

As CPS diversity development program manager Ramon DeJesus sees it, “In our society, it is important for all of our students—regardless of ethnicity or race—to be able to see underrepresented groups in leadership roles.” DeJesus was hired to this new position for the district this year. Many would say this position couldn’t have come at a better time as the hiring and retention of teachers of color continue to be topics of conversation at CRLS.

Because of this breakdown, the hiring and retention of teachers of color has been the subject of an ongoing discussion at CRLS. President of the Cambridge Education Association Dan Monahan told the Register Forum, “I wouldn’t say that anything in our schools has necessarily changed to make it more of an issue. I think it’s been an issue for a while.”

However, Monahan noted that staff diversity is important to Kenneth Salim, Cambridge’s superintendent since last year, and that some teachers who left CRLS at the end of last year were very vocal about the issue. According to Monahan, both of these factors played a part in raising awareness about the issue.

Having less teachers of color than white teachers is not a situation specific to Cambridge. Photography teacher Archy LaSalle commented, “I don’t think it’s just a CRLS problem. I think it’s an epidemic across the country … This system is so skewed.”

Many teachers and administrators at CRLS who talked to the Register Forum say they are aware of factors that could contribute to teachers of color leaving the school. They explained that they knew there had been conversations about teachers of color not feeling supported or comfortable in the school last year.

LaSalle said that the evaluation process is one reason that teachers of color might leave CRLS. He signed a letter to Superintendent Salim last March along with eight other teachers at CRLS agreeing that there are “current evaluation procedures that are targeting veteran educators of color at CRLS and that are undermining attempts to retain educators of color.” The letter also included a list of actions the teachers wanted to see the district take to further their commitment to diversity among staff. LaSalle and English teacher Tanya Trayer emphasized that three of the teachers who signed the letter are no longer working at CRLS.

History Dean Tanya Milner commented that teachers of color often feel they are subjected to “an invisible tax,” because in addition to teaching their classes, they are often expected to act as role models for African American students and as a voice for people of color. Given this burden, she explained, teachers of color sometimes need more support from the administration.

While English teachers Kim Parker and Michelle Li worked at the school, they were leaders of a support group for teachers of color at CRLS, and they held two conferences about staff diversity. Parker and Li left CRLS at the end of last year, but moving forward the support group will meet with teachers once a week and with administrators once a month. The Cambridge Education Association also has an educators of color committee.

English teacher Natasha Labaze told the Register Forum that working here has been “a positive experience” because of the diversity of the student body, saying, “I’ve grown and learned so much from students.” However, she added, “We definitely need more teachers of color at a school with a majority of students of color. The faculty needs to reflect the school’s diversity—that should be our goal.”

Edward Walker, a guidance counselor in Learning Community L, says his experience as a guidance counselor at CRLS has also been favorable; while he thinks that there need to be more teachers of color at the school, in comparison with other places he has worked, he says CRLS’ staff is fairly diverse.

The Administration’s Point of View

One of the most recent steps that CPS has taken to retain teachers of color at CRLS was hiring DeJesus to manage diversity development. DeJesus described his role as “looking to build [and] support diversity, equity, and inclusion initiatives that really look at how we recruit and retain educators of color.”

Regarding diversity at CRLS in particular, Principal Damon Smith told the Register Forum, “As a staff, as an administration here, we have worked extra hard to recruit teachers of color and have worked hard to retain them, and we’re continuing to do so.”

As a staff, as an administration here, we have worked extra hard to recruit teachers of color and have worked hard to retain them, and we’re continuing to do so.”

Principal Smith explained that while the administration is committed to diversity among CRLS staff, Cambridge faces challenges as a small district. “Unless we know in advance, we really can only hire when we have somebody leaving, retiring, moving on, or if we know we are going to get a new position.” For a bigger district like Boston, he explained, there are always going to be positions to fill, so the city is able to hire new teachers when they may not have a specific opening. This means the pool of candidates—especially candidates of color—shrinks, making it harder for smaller districts in the area to hire teachers of color.

Math Dean Jeff Gaglione added that some elements of hiring and retaining staff are outside of CRLS’ control, since teachers leave CRLS for a number of reasons, including other job opportunities and circumstances.

Milner commented that, nonetheless, there are things CRLS needs to improve, including cultural sensitivity. “As a whole building, we are working and need to continue working on our cultural proficiency as adults, with each other. I think teachers of color do feel micro- [or] macro-aggressions from other colleagues. I don’t think that’s because it’s other people’s intent to be hurtful or harmful, but they just aren’t aware of those aggressions that they have,” she said.

Elaina Wolfson told the Register Forum, “I think learning from someone who has experienced being in the margins changes how someone learns. The way people interpret things is different based on their cultures.” She added that she thinks the perspective of those who are in the margins isn’t always incorporated into high school curricula.

For seniors who did not identify as students of color, the average ranking was 6.31 out of 10. Sophomore Eli Siegel-Bernstein commented, “I think [CRLS] needs to hire more teachers of color, and I also think they need to create a safer environment for the teachers of color that they already have.”

However, not all students are especially concerned about diversity among CRLS staff.  “I think the focus on race as a stand-in for qualifications is distracting us from issues of quality of education,” said junior Jeffrey Liu, who identifies as a student of color.

History teacher Kevin Dua, who identifies as a teacher of color, says he was motivated to come to CRLS this year because of what he read in an inflammatory Cambridge Day article published in July about teachers of color at CRLS. In particular, he says he was struck by the work of two current seniors, Annie Rose-Hallett and Victoria Angeles, whose English project on teachers of color leaving CRLS was featured in the article.

Dua told the Register Forum, “Even if one teacher is leaving because they experienced macro- and micro-aggressions related to race … we should address it. We should try to embrace it—we should try to resolve it.”

English teacher Ariel Maloney, who does not identify as a teacher of color, added, “It’s better for us as teachers if we have a more diverse teaching staff, because we’re all then going to learn from one another about how to better support our students.”

History teacher Brendon Kells told the Register Forum that he does not think the process does enough to show commitment to diversity and that the administration needs to be more proactive in reaching out to teachers of color. Victoria Angeles commented she would like more students to serve on hiring committees and for the committees to be more diverse.

In addition to adjusting the hiring process, many people who talked to the Register Forum about this issue feel that a important step is to provide more support for teachers of color who are already at CRLS. Senior Nusrat Lamisa Jahan said, “Of course hiring is important, but the bigger point is keeping teachers of color here.”

Tanya Milner added that teachers of color do not necessarily have to come from outside of Cambridge, and that Cambridge can create a “grow-your-own type program.” She noted that Cambridge is a diverse city, and many students could be encouraged to go into education and then come back to Cambridge to teach.

Edward Walker believes that collaboration on diversity recruitment efforts between districts is important, because not every teacher is the right fit for every school. Kells offered another way to improve practices, saying that a vision for what education looks like in Cambridge that values diversity with actions and not just words could attract more teachers of color to Cambridge.

The consensus among many of the students and staff who talked with the Register Forum is that dialogue is a necessary step. Dan Monahan noted, “Even the best of us is never going to be fully aware of [the micro-aggressions we make]. The only way we can really do that is to get that immediate feedback … The victims need to feel safe in saying [when something is hurtful], and the perpetrators also need to not go into defensive mode and not feel like they’re going to be attacked or punished.”

Maloney commented, “If we truly value diversity, we need to make sure that people in charge are listening to the voices of people they ideally want to keep in the school instead of trying to fix things [from the] top down.” She continued, “If we can’t talk about something, we can’t fix it. We have to name it, we have to confront it—discuss it. Those are the only real steps we can take to fixing these problems instead of just sweeping them under the carpet.”

According to DeJesus, Cambridge Public Schools are on the right track in having this conversation and implementing other strategies to address a need for diversity. “I’m heartened by things like [how] we’ve seen a small increase in the percentage of teachers of color that we have throughout the district. And I think about that the district has put resources behind the creation of my position—a lot of districts don’t have positions like this.”

Nonetheless, DeJesus realizes that his position is a starting point. He emphasized, “We have a lot of work to do.”

Shuvom Sadhuka also contributed to this piece. This piece also appears in our December print edition.

Top photo: Archy LaSalle teaching Photo 1; the board reads, “Silence does not help to bring positive change in a society.” 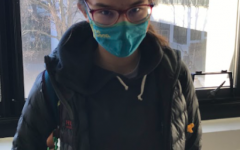 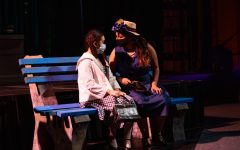 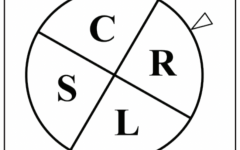 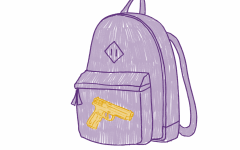 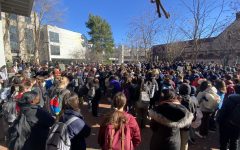 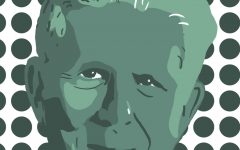 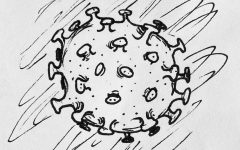 New COVID-19 Variant: Cause for Concern, but Not Panic