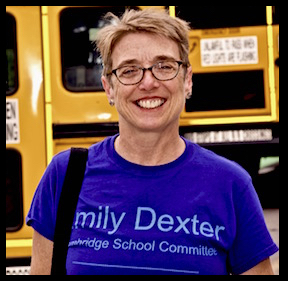 Register Forum: What distinguishes you from the ten other School Committee candidates?

Emily Dexter: That’s a hard question because I don’t know all of them that well. I guess what I usually say is that… one thing I do is I do a lot of data analysis, and that sounds very unsexy, but actually it’s a great way, because I have a lot of training and data analysis and statistics and research; it’s a great way to find out what’s going on in the district because you can look at all the different patterns, you can look at all the schools at one time, you don’t have to go to each school and ask what’s going on. And usually, people don’t know what’s going on because they can’t see the numbers. You know, it’s not infallible, because data is always limited, but it’s one of the things that I really do a lot of. So, for example, when I first came on the School Committee, four years ago, I just asked a simple question, which is “who’s getting to school and who’s not, because some kids are missing three and four weeks of school,” and especially when kids are young, I mean High School’s a totally different thing, but [then] you’ve got a first-grader who’s missing three and four weeks of school for all kinds of reasons. So when the administration started looking at that data and really exploring what the patterns were and who was getting to school and who wasn’t, then they put in a lot more support for kids through social workers, etc.

RF: So did you organize the data collection?

ED: No, they collect that data anyway. Sometimes, I analyze the data myself, but I can’t get access to a lot of it because it’s private student data, but on the Department of Education website, I can get some data that I can analyze myself.

RF: And then you used that to inform your…

ED: Yeah, they used it to inform their practice, because as soon as they saw the data and they saw that “oh, this group is having a more difficult time,” and sometimes it’s family stress or kids who might go with their parents to the doctors or translating, there all kinds of reasons, or they have to go back home to their country, etc. So if a family is having a difficult time for a lot of reasons, a social worker might be able to hook them up with services or translators or whatever, so that’s one example.

RF: How do you think the School Committee could become more effective?

RF: So the meetings are always open for students?

RF: How are you aiming to close the achievement gap?

ED: You have to have lots of different ways because it’s not one thing, it’s just, you know, the complexities of our unfair world. So you know things like trying to close the absence gap, or the attendance gap is one way. I’ve been working with sort of a community organizing group and the purpose of that group is to get the community to put more pressure on the schools, hiring more teachers, smaller class sizes. I’m a big believer in smaller class sizes, more para-professionals. So I think that would help, too, to have more people in the classes, and there’s research showing that that that would help. So there are two reasons, but I think the community putting more pressure on so that the administration will try more solutions.

RF: So you said you’ve been working to hire more teachers and social workers?

ED: Yes, that’s been a big thing of mine. I’d say that’s another thing that distinguishes me is that I am probably the only person currently on the School Committee who’s really pushed for more staff, including at the high school. So you guys got an extra guidance counselor in part because Lawrence Kimbrough and I pushed for that. But across the board: social workers, guidance counselors, smaller class sizes, more paraprofessionals, more specialists, things like that.

ED: Well, I think the teachers and the students are the strength, and we just have such great people here and, you know, as the students get older they get more individualized, their personalities emerge and their different skills, so I think the kind of things that the students initiate, all the clubs that you all do, things like that, that’s a strength. And I think there are just some fantastic teachers and fantastic administrators in the system, and I think that we’re really lucky, I think people want to work here.

RF: So is there anything the School Committee could do to emphasize the clubs or the community?

ED: I think we try to fund the clubs, so different funding issues have come up, in fact, I think RF asked for $5000 extra this year. Anyway, I think all of us on the committee supported them and I think you got some extra money. So, the thing about the School Committee that people don’t understand is we don’t control everything, we actually, we’re pretty limited in what we can control. So we can’t come in and say “why don’t you start a club in this…”, it’s not even appropriate. So those kinds of things that happen in the school are really under the discretion of the principal because they’re the leader of the school, so it’s their responsibility to look for new opportunities. So I think the principals actually have the most power in the whole system in terms of the day to day, year to year operation.

RF: So that’s kind of what your main goal is?

ED: Yeah, I think it’s everybody’s main goal. It’s the absolute number one goal … And we have different goals in terms of how to do that. So one of my goals is to put more staff in because I believe that staffing will help with achievement. Other people have a different thing that they feel will help with achievement, so we’re all trying to put it into a big pot, and hope that it all helps.

RF: You said that you do a lot with data. So, after you hire a new guidance counselor, etc., are you able to collect data to measure the effects of that?

RF: So that may say who is applying?

ED: Anyway, we’re trying to survey students and teachers every year to get general satisfaction, how happy you are with the school, how much you think you’re learning, do you think that there’s a good environment and school atmosphere. So, that’s one way that we can actually measure whether things are getting better, but we just started that I think last year. It is very hard to measure these things, but I am a big believer in surveys

ED: So this is my second term, so I started four years ago. My kids went through the system, both my kids went to King Open K-8 and then they went to Rindge. So I just got more and more involved as a parent, you know, I started making spaghetti for the spaghetti suppers and just little things like that, and then, because I was studying education, I have a degree in education, so since I was studying that I thought a lot about how what I was studying matched what was happening in the schools. I started going to School Committee meetings, I started a blog called Public School Notes, so people just started to get to know me and say “why don’t you run for School Committee?”

RF: Is there anything from when you were in school that made you want to study education?

ED: I think it was a general—I think I knew that I would either go into education or the arts, I was just interested in the humanities, and when I was coming out of college, I did an internship with the [Boston] Children’s Museum, kind of on a whim, and that got me interested, and then I worked at a school for deaf kids for a long time and sort of one thing led to another.

RF: What has been your greatest achievement over the past four years?

ED: Well, I do really feel good about getting more staff in the schools, so, for example, in 2011, they cut 16 paraprofessional positions in the elementary schools, which is a lot, because there was an economic decline. And so this year, they reinstated 16 positions, and it wasn’t entirely my responsibility that that happened, but I felt like I had really pushed and I had given information to the teachers union, and tried to give them data. So I would say that that’s probably my biggest accomplishment.