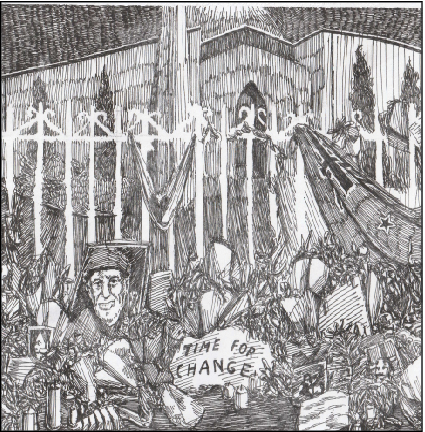 Mass shootings have been an all too common occurrence in the United States over the last two decades. Exact numbers depend on how the term mass shooting is defined, but USA Today, which defines a mass shooting as a shooting in which at least four people are killed, identified 271 incidents between 2006 and 2017. Although workplaces are the most common location for mass shootings, with schools coming in second, there has also been an alarming number of attacks at places of worship.

From the 26 people murdered in a Texas church in 2017 to the 11 killed in a Pittsburgh synagogue last October, these attacks are becoming horrifyingly regular. Just in the past few months, we have seen a series of bombings in Sri Lanka that killed hundreds of churchgoers, and a shooting at two mosques in New Zealand that killed dozens more. It is clear that attacks at religious institutions are increasing, not just in the US, but across the world.

When someone goes to a religious service, it is a time for them to connect with a higher power. Whether it’s at a church, a synagogue, a mosque, or a temple, time spent in such a spiritual setting is sacred. When that sense of safety is shattered, as is every time there is a mass shooting at a place of worship, service-goers around the world are harmed both physically and spiritually.

It is important that we recognize the outsized impact that attacks at religious gatherings have on members of that religion all over the world, and not just the deeply painful experiences of the immediate victims.

As a young person growing up in a world where it seems like we grow more and more polarized each day, it is deeply upsetting but not surprising that there are so many attacks at places of worship. It takes just a few clicks on Twitter or one glance at a TV news show to see that some people in our nation seem to have forgotten that one of the founding ideals of the United States is freedom of religion. From Donald Trump’s Muslim ban to people being attacked in the streets for their beliefs, hatred of members of other religions appears to be increasingly common in the US.

In light of the hateful attacks that have dominated the news recently, we must take it upon ourselves to fight back against religious hate and distrust. We must recognize that every person has the right to their beliefs, regardless of whether or not we ourselves share those beliefs. Thomas Jefferson himself said, “The constitutional freedom of religion is the most inalienable and sacred of all human rights.” From the earliest days of the United States, we have been a nation descended from religious exiles. That is something that all of us should remember when we see someone with a different set of religious beliefs than us. There is no “American religion,” for the basis of this country is that all people are accepted, regardless of who or how they worship.

Often, it may feel as if we are helpless to do anything about this trend. That feeling of helplessness is understandable, given that we are not the ones in positions of power who can make changes to government legislation. But our actions can still have an immense impact. Just learning about other religions and the people who practice them, as well as encouraging our friends and family to do so as well, is a major step towards having more understanding in our community. Above all, it is key that we resist being divided along spiritual lines. We, as a city and as a nation, must stand together in acceptance of all religions and condemnation of discrimination and violence.