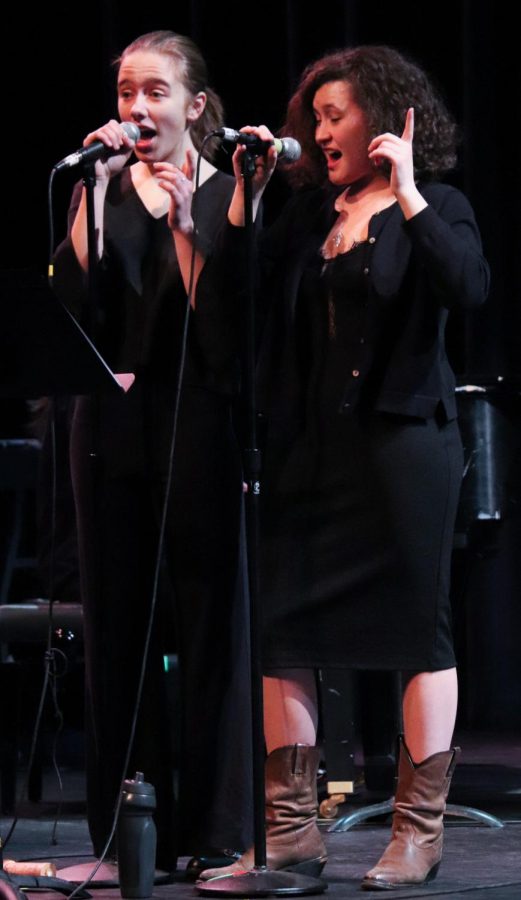 The World Jazz Ensemble was one of the groups who performed on Jazz Night.

On the nights of Thursday, January 10th, and Friday the 11th, members of the CRLS community gathered at the Fitzgerald Theater to watch performances by several ensembles of the CRLS music program. The semiannual performances are the result of a long semester of preparation from both the musicians and directors. This year’s Winter Concert Series made history by being the first full orchestra CRLS has ever had—complete with strings, winds, brass, and percussion.

The first night of the Winter Concert Series was the Classical Concert. Featuring performances from the orchestra, directed by Laura Umbro, several vocal ensembles, directed by Ivan Stefanov, and Concert Band, directed by Nathan Powers, the hard work of these talented musicians definitely paid off. The auditorium was packed with students, parents, and teachers who enjoyed the beautiful melodies played and sung by CRLS’ student musicians.

Madeline Dickman ’19 spoke fondly of the performances, saying, “It was exciting to see so many students involved with [the Classical Concert]. There were more students in all of the ensembles, so the different arrangements really filled the auditorium!”

The second night of the series was Jazz Night, which included performances from Big Band, directed by Mr. Powers, as well as the World Jazz Ensemble and Percussion Ensemble—both directed by Guillermo Nojechowicz. Once again, spectators were captivated by the wide range of performances which upheld the renowned reputation of the performing arts program at CRLS.

Franny Oppenheimer ’20, a member of both the Concert Band and Big Band, spoke about her experiences with the music program: “The music is fun to play, and it’s nice to be part of a large ensemble like Concert Band.”

Similarly, Josie Weissburg ’19 noted, “I took the Concert Band class freshman year and enjoyed it a lot. Since then, I have performed in every concert, attending some 5th Period Band sessions in order to do so.” Throughout the semester, directors and student musicians from all ensembles have worked tirelessly to find time both during and outside of school to practice and play together as an ensemble.

In recent years, the CRLS music program has experienced a great deal of exciting growth, and in an interview with the three directors of the performing ensembles, it was evident that this year’s performance was the biggest yet. According to Director of String Orchestra Ms. Umbro, “This year, we’ve made CRLS history being the first full orchestra ever on stage, which is really exciting. … When I started orchestra eleven years ago, there were only six students in it, and it was only strings. I always wondered when we would finally be big enough to invite some winds and it’s finally happened.” On January 10th, there were over 50 students performing on stage in the Orchestra.

The ensemble directors attribute this growth to their recent efforts to visit the five Upper Schools to spark interest in the music program for students at a young age. Mr. Nojechowicz, who has taught in the music program for eleven years, emphasized the importance of this expansion, noting, “Identifying the students in middle school is crucial because high school is a short period—it’s only four years.” According to Ms. Umbro, “We’ve seen more freshman coming in than ever since doing that.”

On this recent growth, Choral Director Dr. Stefanov noted, “These are exciting times for the music department and I am glad to be a part of it!”