US Presence in Syria: What If Trump Is Right for Once? 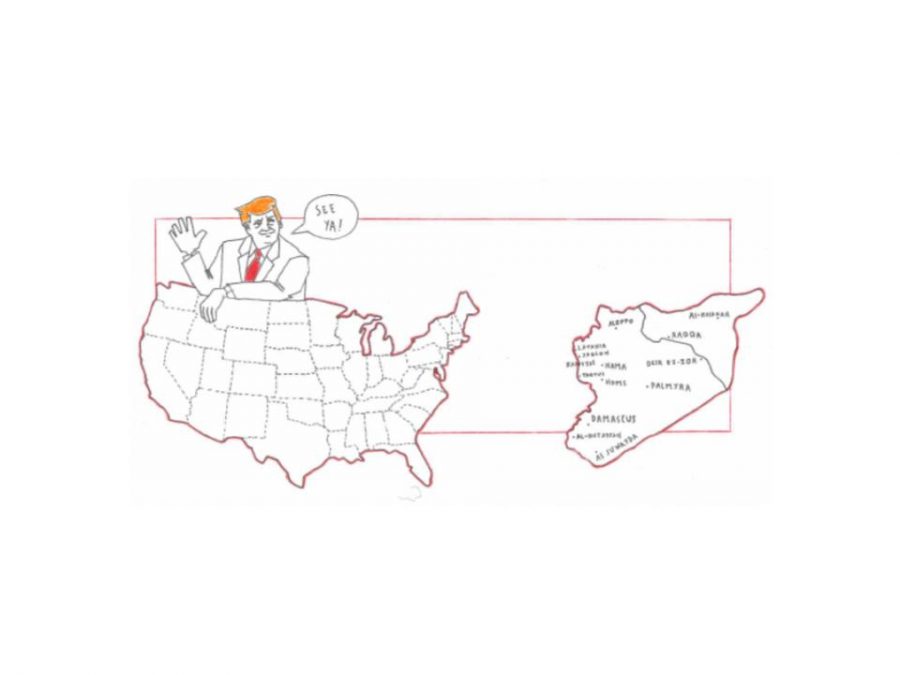 Trump shocked the world on December 19th when he announced via a video on Twitter, “We have won against ISIS. Our boys, our young women, our men—they’re all coming back, and they’re coming back now.”

ISIS has not actually been defeated, though the territory that it controls has been drastically reduced since 2011, as has their influence. Since the 19th, various members of the Trump administration, including National Security Advisor John Bolton, have walked back some of Trump’s statements, saying that the US won’t actually leave Syria until ISIS has been defeated—something that could take months or even years. Most recently, Defense Department officials announced that the US has begun to withdraw equipment from Syria. It is valid to question military involvement in Syria, but there were major flaws in Trump’s policy presentation and in the way he came to his decision.

Trump decided to withdraw troops even though he hadn’t consulted his advisors about the merits of continuing military involvement in Syria. Instead, Trump pulled the trigger after talking to Turkish president Recep Tayyip Erdoğan, who told Trump that, given the president’s statements saying that ISIS has been defeated, there was no need to continue American involvement in Syria. Erdoğan also said that Turkey’s military could handle any remaining areas of ISIS control. Trump responded to Erdoğan, saying, “You know what? It’s yours. I’m leaving.”

Given Trump’s history of chaotic, uninformed policy decisions, and the way that he presented his withdrawal of troops in Syria, many people’s first instinct was to automatically disagree with his rhetoric. History teacher Rachel Otty told the Register Forum that she was initially inclined to think that Trump’s decision was terrible, but then she reminded herself, “Since when am I a person who supports long-term military occupations in the Middle East?”

There is validity in examining whether the US needs to be in Syria or if the US should leave Syria at some point in the near future. Prolonged military involvement is not sustainable for the troops on the ground, the American economy, or Syria’s infrastructure.

The purpose of the American invasion in Syria is to quell ISIS’ influence in the Middle East. A prolonged American presence runs the risk of destabilizing Syria either by being ineffectual and failing to hinder ISIS’ influence or by being overbearing and sowing civilian resentment. A foreign power cannot create true rule of law or even attempt to establish a stable society unless they work closely with civilian groups and do not impose American values upon the occupied country. Looking back at the US invasion of Iraq, American troops failed to quell Al Qaeda and ISIS violence in the region, and instead created the chaos in which ISIS thrives. Given this history, Trump is not wrong in questioning the efficacy of the American involvement in Syria.

American troops should be withdrawn from Syria. However, their removal should be conducted with careful thought given to the timing and consequences of the withdrawal. If the US pulls out too quickly, a vacuum may be created in which ISIS or a similar Islamist extremist group could form in its place. Secondly, Russia and Iran, two countries with which the US has had a history of disagreement, could expand their presence in Syria. Lastly, the Kurds, who have been allies of the United States throughout both the Iraq and Syrian conflicts, could feel betrayed by Trump’s policy and could be more vulnerable to Turkish forces, who view them as a dangerous population of insurgents.

Trump’s announcement to withdraw troops from Syria was problematic, but it also raised legitimate questions regarding America’s global military presence that should continue to be evaluated.