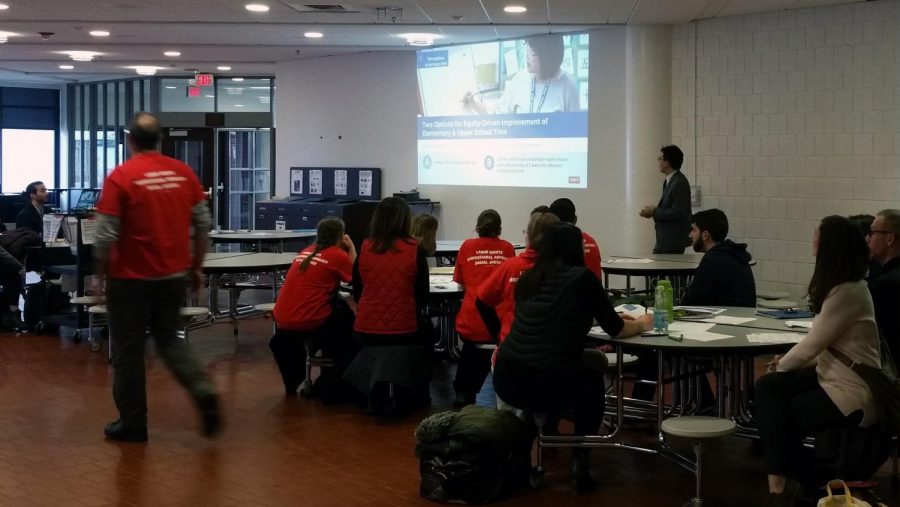 Pictured: Superintendent Salim in a town hall meeting on the plans.

In early January, the Cambridge Public School District introduced a proposal to advance equity in Cambridge schools. The new proposal offers a way to promote equity by “Addressing the time-based barriers to improvement,” which requires a “three-pronged approach: improving the use of time (Quality), increasing time for students and staff (Quantity), and improving coordination with the out-of-school time community (Access).”

The proposal entails extending the school day for elementary and upper schools, expanding after-school programs so more children will have access to them, and providing teachers more days off to improve their lessons. It offers two solutions to this problem. In proposal A, children would go to school for 6 hours and 45 minutes every day of the week, rather than just six hours. In proposal B, they would still go to school for 6 hours and 45 minutes, but on Wednesday of every week, children would have a five hour school day. The new plan is yet to be voted on, but there have been ongoing meetings with parents and Cambridge officials to figure out the best way to initiate the proposal.

The plan does not apply to CRLS, as it would affect sport schedules. However, the school district thinks that if it can help tighten the achievement gap in lower and upper schools, students will be able to continue their successes in high school with a shorter day. Manikka Bowman, a School Committee member, says, “According to recent MCAS data, black students score proficient or advanced in math at 30%, while white students enter the high school with 77% proficiency in math. While many people have very strong opinions on standardized tests, the gap in skills is too big to ignore. … Tackling this issue of improving academic success for CRLS students starts in elementary and middle school. Extending the school day is one of many strategies district leadership is exploring to address these systemic educational barriers that show up in our district.”

While Cambridge is trying to improve equality in schools, there has been controversy over whether extending the school day is the right course of action. Some people say the plan could actually hurt children’s learning since they would have to wake up earlier, which is proven to affect their school days. Others think it could create more of a hassle for many parents, since they would have to rearrange their work schedules to pick up their children. Joshua Bartholomew, a teacher at CRLS and the parent of two children at Cambridgeport School, says, “The extended day won’t affect my schedule because my kids do [activities] after school, but the earlier start is a little worrisome.” Mallory Heath Claggett, the mother of a child going into kindergarten, has different worries. She explains, “I am not opposed to an extended school day, but the school district needs to be more clear about how it will be implemented.”

Students at CRLS, just like many parents, have their own opinions on the new extended day. Lucy Pelletier ’21 thinks, “It’s more important for students to have their own free time out of school than in school, and it has been proven that earlier school days hurt students substantially. Personally, I do not think an extended school day would be beneficial to students.”

Still, the School Committee and Superintendent see an inequality that cannot be easily solved through smaller actions. As Bowman said, “We are not preparing some students to enter CRLS, while others are thriving. That is not OK.”