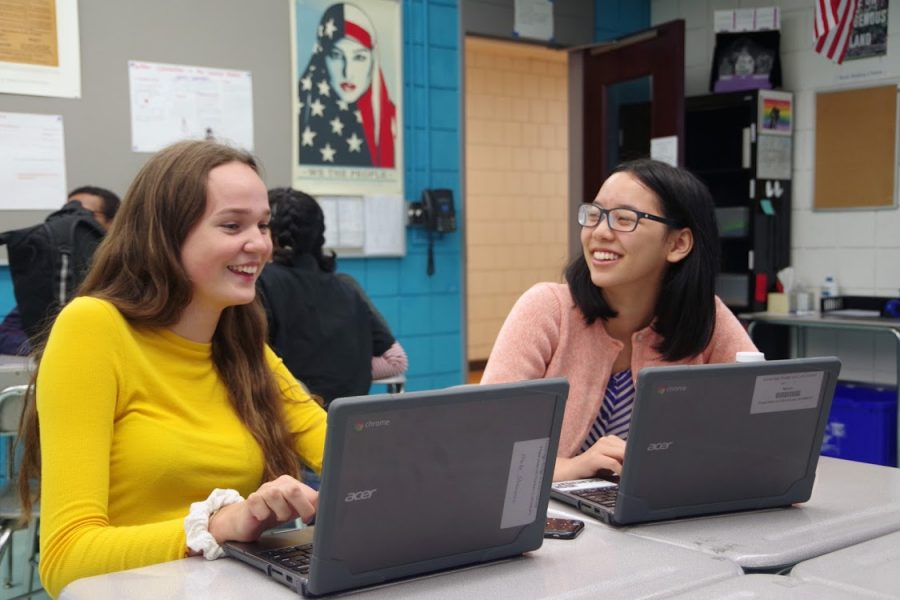 The Chromebook policy allows for every student to have a laptop.

At the end of this past summer or in the last couple of weeks, you may have gone with your family to pick up a Chromebook from the Dr. Henrietta Attles School Committee room. If you did, you were issued a small, grey laptop labelled with your name and protected with a rubber case. You picked up this new device as part of CRLS’ new 1:1 technology model, where every student and every teacher is given their own device.

While the 1:1 program has been in the works since 2015, students first began receiving their own devices last year. As freshmen, the class of 2021 piloted the 1:1 program and were given Chromebooks to use in all of their classes and to take home.

This year, the program was extended so that students in every grade would get a Chromebook, along with a case and a charger. Approximately 1,737 students have picked up their Chromebooks, and there are about 215 left to give out.

Gina Roughton, the Assistant Director of Educational Technology, said that the program came out of a visioning process where teachers and staff imagined what they wanted classrooms to look like in five years. They concluded that CRLS was “in a position where technology needed to be readily accessible in any moment during the school day as a learning tool.”

As the new program has gotten off the ground, many teachers and students have embraced the resources that Chromebooks can provide, but others have had concerns.

Lily Matthews ’20 noted that the Chromebooks are beneficial for students who don’t have access to computers at home, but that “for students who already own personal laptops, the school is spending money on technology that students don’t particularly want to use.”

Ms. Roughton is aware of this concern, and said that the technology committee that was formed to implement a new technology program decided on a school issued 1:1 model in order to “not create inequity in appearance” over who has a personal laptop and who has a school-issued device. In addition, the fact that every student has the same device means that the school can help fix the computers when they are broken.

“I think that there is an intention that is good—I think it’s good in theory but not good in practice,” said Keenan Sheaves ’19.  “I think that if it’s an issue of equity—which is, I think, what the school is trying to attack—people who don’t have personal devices should be allowed Chromebooks, but I don’t think it should be a requirement.”

Other students don’t like being required to use a device that restricts their access to certain websites. “It’s horrible … I can’t go on Youtube, I can’t watch Netflix,” said Enoch Fu ’20. “I would prefer bringing [my own device] or unfilter stuff.”

“There’s certain search terms that you might need for a history class or something—or just in general—and they block it,” said Emma Blanc ’21. “So you can’t search for things you need to and you also can’t access YouTube which is sometimes useful for various projects.”

Principal Smith said that he has been talking with Information Communications and Technology Services (ICTS) about Youtube restrictions, given that there is a fair amount of educational content on the platform, but as of now, however, Youtube remains blocked.

There were several reasons why the district chose Chromebooks as the devices that all students receive: Chromebooks work well with the G-Suite for Education, which is the combination of applications like Google Drive, Google Classroom, and Gmail; they have a relatively fast start up time, minimizing the amount of instruction time that is lost; and they don’t tend to need a ton of technical support.

In addition to possibly giving all students equal opportunity to succeed in school, the new Chromebooks have the potential to change the school’s relationship to paper. “It is definitely a hope that paper use can be reduced with the increased availability of technology tools,” said Ms. Roughton. “However, I also acknowledge that some practices are better done on paper and will never be improved or replaced with technology.”

However, some students believe that paper consumption hasn’t been significantly reduced by the Chromebooks. “The teachers who aren’t using paper haven’t really ever used paper,” said Xander Phillips ’19.

While some students clearly have concerns about the Chromebooks, the overall sentiment seems to be that the program will increase equity at CRLS. “It’s good to have everyone have the same [device],” said Noa Gone ’22. “Because not everyone has a computer or a printer… at home so it’s nice [for students] to be provided with something that they can use.”

This piece also appears in our September 2018 print edition.