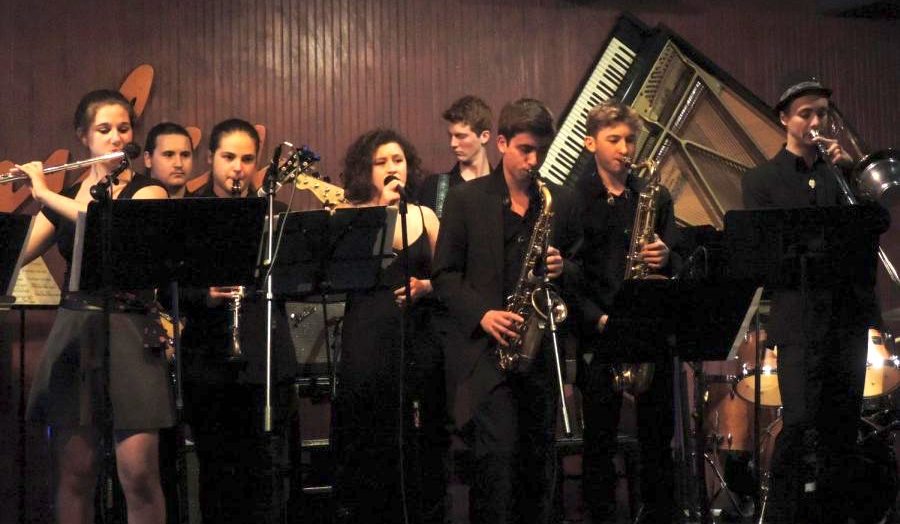 Pictured: CRLS World Jazz/Big Band performing for the last time at Ryles before the venue closes.

On May 1st, a Tuesday of unseasonably warm weather, CRLS Big Band, Vocal Ensemble, and World Jazz Ensemble turned the temperature up even higher with their performances at Ryles Jazz Club in Inman Square.

For the past four years, CRLS music groups have been performing at Ryles in the spring to showcase the works they have produced in and out of school. From student-composed pieces to international compositions to classic Frank Sinatra, the audience on May 1st enjoyed a full-range of musical versatility.

The event is extremely popular, and this year was no different. “It packed up really fast,” said Cameron Moody, a sophomore who had never performed at Ryles before. The venue was standing-room only by 7:00 PM, when the show began.

However, this year was a bittersweet one for the music department, as Ryles is closing this spring after more than 40 years providing a space for local musicians. The music department is currently looking for other venues inside and outside of Cambridge to hold future performances.

“The closing of Ryles is a real loss. It is a sad state of affairs for Cambridge,” said Mr. N, who leads the World Jazz Ensemble. Mr. N has been performing at Ryles himself as a percussionist since the 1980s, so this final show was especially poignant for him.

Mr. N attributes the closing of Ryles, as well as the closing of Johnny D’s in Davis Square last year, to a lack of appreciation for art. “I think we’re living in a very, very difficult time where the society has become very greedy and corporate, everything is oriented to the corporations. We’re not thinking about the effect that that can have on people. People need poetry, and music, and visual arts, and theater as a vehicle to express themselves. The audience needs that,” he said.

The audience on the 1st is a perfect example. In addition to having such high attendance, the crowd was snapping, smiling, and bobbing their heads from 7:00 PM until 10:15 PM, when the World Jazz Ensemble performed their last song (they had a few more planned, but by then the event had run late).

“The best part [about the night] was how packed the place was with family and friends. A lot of students who have no connection to music came to support us—on a Tuesday before SATs or APs,” said Hanna Carney, a junior who is a vocalist in both Big Band and World Jazz.

Carney has been singing all her life, but began to take it more seriously five years ago. This was her first year in Big Band, and her second year with World Jazz performing at Ryles. “Returning this year, I loved feeling more comfortable with the space.”

The atmosphere at Ryles was a highlight for many of the performers used to playing in the school auditorium.

Olivia Alexander, a freshman, “loved the vibe of the place.” Cameron Moody and Carney agreed.

Performing live in such a setting is what Mr. N wants to emphasize to his students. “What I mainly want to convey to World Jazz Ensemble … is the art of performing live. How do you do that? How do you communicate with an audience? How do you become generous? How do you generously pass on a tradition of jazz—of world jazz—to an audience? That’s what I teach, that’s what I will continue to do.” While it may not be at Ryles in the future, CRLS music will continue to perform live.