The Register Forum • May 24, 2018 • https://registerforum.org/3755/news/santa-fe-texas-school-shooting-prompts-crls-walkout/ 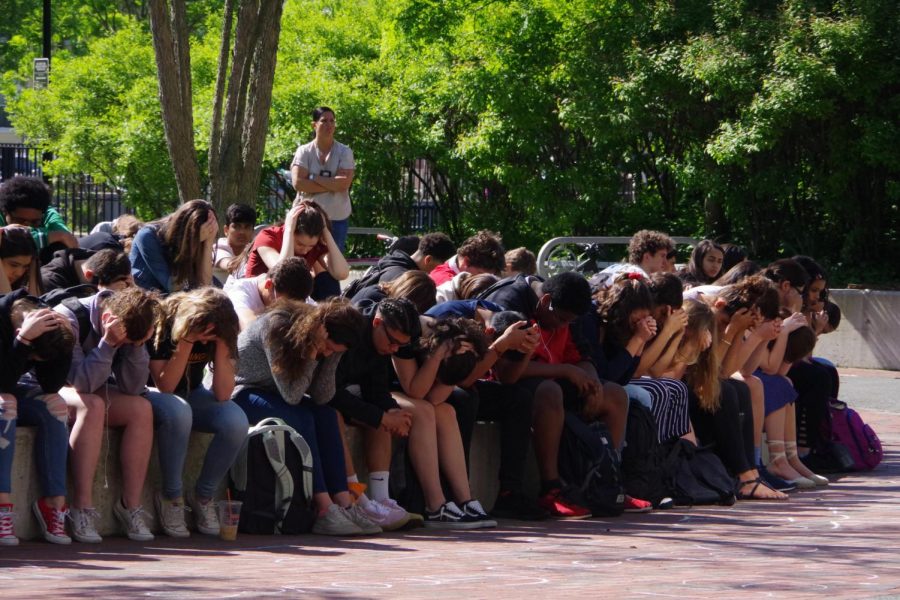 As the sun returned after a week-long absence, hundreds of CRLS students and staff gathered outside of the main entrance, a scene reminiscent of past walkouts in the aftermath of the Parkland shooting only a few months ago. On Monday, May 21st, at 9:31 AM, students and teachers sat on the hill in the “lockdown position”—knees in, hands holding head—during a ten- minute-long silence held in honor of the ten victims of the recent school shooting in Santa Fe, Texas. The walkout was also held in response to the general issue of gun violence in the United States.

Written in chalk on the ground were the names of victims from the Santa Fe, Parkland, and Waffle House shootings, in addition to victims of police brutality such as Trayvon Martin and two CRLS alumni who were killed by gun violence.

This was the first walkout held by CRLS Students Against Gun Violence (SAGV) as a unified group. According to junior Eloise Botka, SAGV is “a mixed groups of students and opinions on … the issue of gun violence in the United States both surrounding the black community, the Hispanic community, and other communities such as schools.” The group aims to “address gun violence as a whole,” added junior Hermella Kebede.

After the ten minutes, a phone alarm rang out and Jonathan Matsko ’19, a CRLS SAGV organizer, made an announcement about the voter registration drive that was held by the CRLS History Club during all lunches on Tuesday, May 22nd.

The walkout was announced through social media posts and a school-wide email on Sunday night, which some people believed was too short-notice. Several students had not heard that the walkout was happening and did not participate. Mohamed Rashid ’20, who did not know about the event, thought that it would have been more effective for students to hear about the walkout from teachers and not just social media.

“I think the school shootings that are becoming a huge epidemic in this country are a problem,” said sophomore Paloma Pellegrino, who thought the timing of the walkout—which didn’t interrupt class time—was effective because “we have to go to school sometimes.”

This walkout was different than past walkouts at Rindge in that it was held during Community Meeting and students were to return to class after; it did not detract from any class time. “I feel like it showed awareness the best it could without taking away from other kids’ education,” said Nikoliss McGuffie ’21, who had also participated in prior walkouts during class time.

Matsko said that the goal of the walkout was to have a more meaningful moment of silence rather than the typical moments of silence held over the loudspeaker. He also mentioned that organizers looked for a way to hold walkouts in a more interesting way. “We’re not just doing this to get out of class,” he said.

Neither Botka nor Kebede were surprised that another school shooting had happened. “The only thing that shocks me,” said Kebede, “is the fact that we’re not shocked.”

Next Tuesday, May 29th, from 6:30 to 8:30 PM, a panel of student organizers from the Greater Boston area—along with several MSD students—will be speaking at the Cambridge Public Library’s Main Branch.