Boys Hockey: An End to a Successful Season 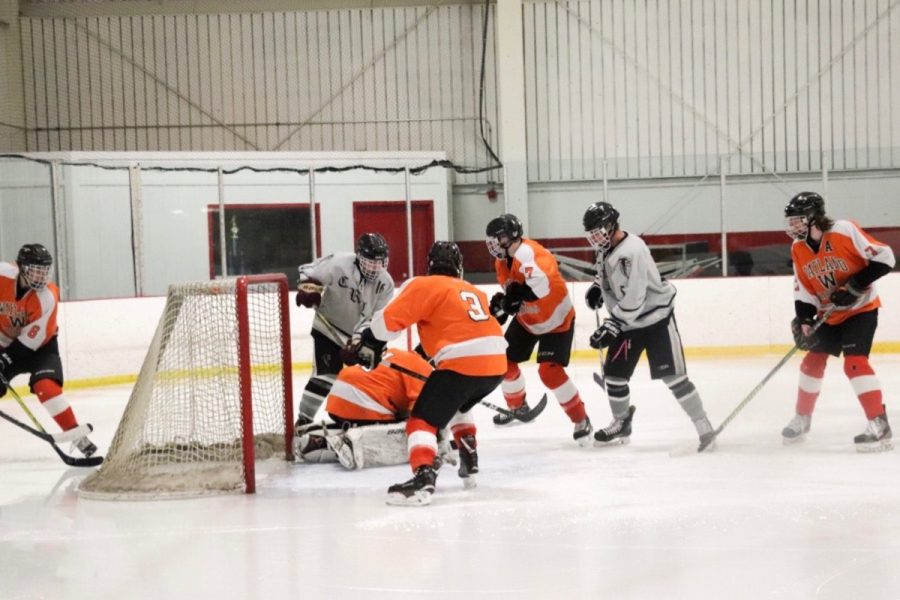 The boys hockey season ended with a 5-2 loss to Wayland.

The boys varsity hockey season came to an unfortunate end on March 4th in the quarter-finals of the Division 3 North playoffs. The Falcons’ season finished in a 5-2 loss to Dual County League rival Wayland in their first playoff game.

First-year coach Mark Marfione admitted the season had a “disappointing outcome,” but he also added, “We accomplished a lot and learned from the experience.”

“It was [a disappointment], to be number one in our league and go down in the first round to a team we should have beat,” remarked freshman Luc Denney.

During the regular season, Cambridge had a 13-6-1 record, despite what Coach Marfione called “a very challenging out-of-league schedule.” Senior Casey Rideout added, “Game in and game out, we proved that we were able to compete with some very high level competition.” This season’s success clinched Cambridge’s third straight DCL championship.

Coach Marfione praised previous coach Chris Watson for “putting Cambridge on the map and creating a winning tradition.” Boys hockey hopes to continue that winning tradition in the coming years, even though this year’s team was led by a group of seniors. Casey Rideout, a graduating defenseman, said, “Next year will be tough, we are losing a lot of players, but I think if they continue to work together they definitely have a shot to keep progressing.”

The boys varsity hockey team does have several underclassmen that “had good years and are ready to break out next year and take over the team,” according to Coach Marfione. Denney is one of those underclassmen, and said that the team is “hungry and ready to compete next year.”

He also said that the team thrives off the support of the fans, and that “the crowd is imperative and dictates how we play.” He added, “That was a problem in the first round of States. Our crowd was flat in the beginning, and the Wayland crowd was way bigger and louder.” Senior Casey Rideout also commented, “This was the first year in my four years that I have seen the hockey team have a crowd; it definitely pumps up the team.”

With the passion of the fans, coaches, and players, Cambridge’s recent success seems to be only the beginning of a growing hockey culture at CRLS.

This piece also appears in our March/April print edition.