Coming off a championship season, the Falcons look to continue their trend of success 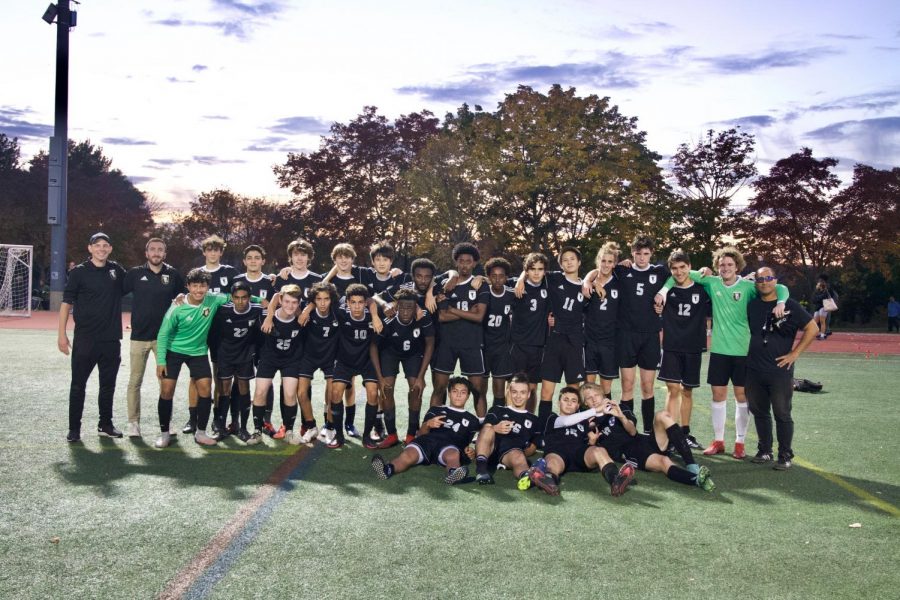 Last year, Boys Varsity Soccer capped off their spectacular season with a Dual County League championship win; now, they are looking to make it even further. “This year we are pushing to not only make states, but also to make it into the upper playoff bracket of the DCL,” Striker Eddie Keen ‘22 told the Register Forum. Competing in the MIAA (Massachusetts Interchoolatsic Athletics Association) state championship tournament was something that last year’s team did not have the chance to do, as the tournament was cancelled due to COVID. As of October 13, the Falcons sit at an admirable 5-4-4 record, needing only two more wins to qualify for the 2021 MIAA state tournament.

For the Falcons, team chemistry is fundamental. Keen credits the team’s outstanding chemistry and ability to stay on the same page as one of the team’s most impactful reasons for success, saying “we’re a very close team and all of us believe we’re going to win.”

Upperclassman leadership, as well as the ‘do whatever it takes to win’ mentality, are two key factors propelling the boys soccer team to success. According to midfielder Henry Powers ‘23 in an interview with the RF, senior leadership was the “glue ” that held the team together last year and transformed a talented roster into a championship-caliber team. Senior leadership is something that has helped solidify this winning mindset and boost the morale of the team this year as well. This season, the senior captains include Aléx Leith ‘22 and Chris Velez ‘22 with Coach Phil Fousk leading the pack. Leith elaborated on his role as a team captain, saying, “It’s not always easy, but as a leader, I have a responsibility to guide the people around me and lift up my teammates… and I’m extremely grateful for that.”

Other than the Falcon’s in-sync team chemistry, strengths of the BVS team, according to Leith, include a solid defensive line and creativity on offense to produce scoring opportunities. However, injuries continue to pile up forcing more and more players with less varsity experience to step up from the bench. As of now, there are no BVS players under the age of sixteen, so roster depth serves as an important point of emphasis for the team in the future.

One of the Falcon’s biggest wins came on Saturday October 11, when BVS defeated the highly ranked Chelmsford soccer team in a pivotal 2-1 win on senior night. Going into the game, the Falcons were coming off a tough two loss streak and were at risk of falling to a .500 win percentage with another loss; a win was necessary to sustain hopes of winning the DCL upper bracket. The game was played under the lights with the student section roaring all night long, giving the Falcons a burst of confidence as they stifled Chelmsford in a hard fought game from start to finish. “It was a movie… the crowd’s energy behind us was unreal,” said senior Nathan Yewendwossen ‘22.

All BVS home games are played at Danehy field, and schedules for games are posted on the CRLS athletics instagram page. Pack the student section and make sure to tune in to follow the Falcons championship run!