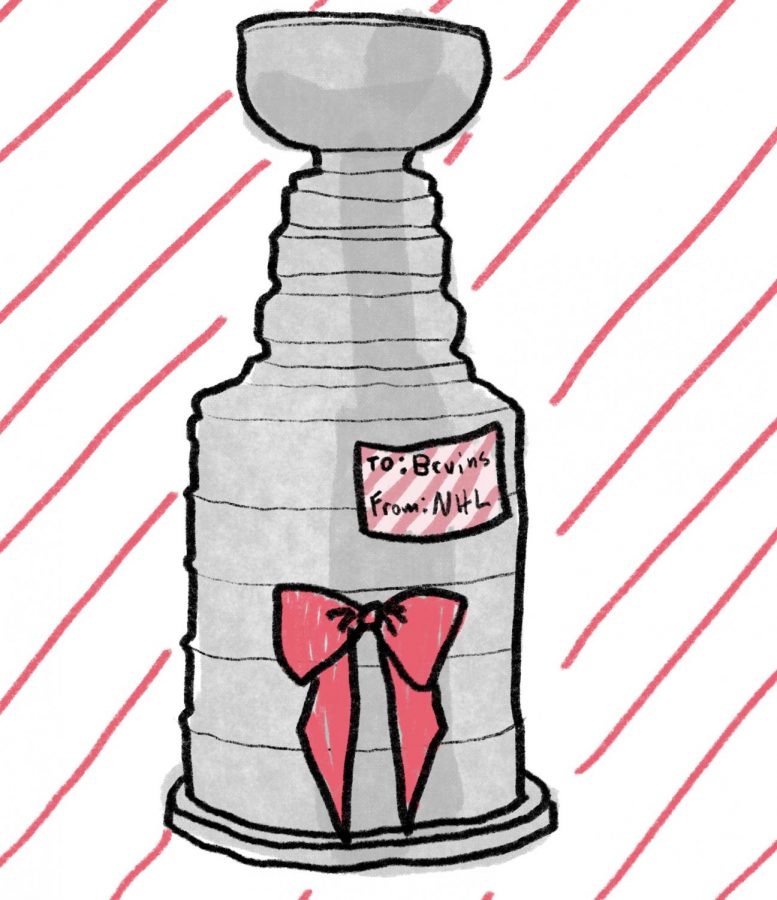 The 2020-21 regular season was one unlike any other in the history of the NHL: a shortened 56 game season, realigned divisions based on geography, and with little to no fans in the stands. The Boston Bruins had plenty of questions to answer as well. How would they deal with the loss of their captain of fourteen years, Zdeno Chara? Could they find enough depth scoring? Could they withstand the East division, largely considered the toughest in the league?

It was not an easy season for Boston. Incredibly, they had to use thirteen different defenseman due to injuries. At one point, they were also down to their third and fourth string goalies. But truly, there was never any doubt among Bruins fans that their club was going back to the postseason.

You can’t talk about the Bruins in 2021 without talking about their first line, which was ranked first in the league by Daily Faceoff. Patrice Bergeron, the center of the line and new team captain, finished the year with 48 points and the third best plus/minus among all NHL forwards. His left winger, Brad Marchand, finished the year with 69 points, placing him third in the entire league and first in the East division. Lastly, David Pastrnak, the reigning Maurice Richard Trophy winner (given to the league’s leading goal-scorer), finished the regular season averaging exactly a point per game.

The defense also overperformed almost all expectations, especially with such a young group of players. Charlie McAvoy, the team’s workhorse defenseman, had far and away the most minutes of anyone on the team, averaging 24:00 per game, while elevating his play to become one of the NHL’s best and most well rounded blueliners.

In net, the Bruins faced some unexpected turbulence, although not due to any actual poor play. Both Tuukka Rask and Jaroslav Halak, the team’s regular netminders, battled injuries, which opened the door for youngsters Jeremy Swayman and Daniel Vladar to get some NHL experience. It turns out that Swayman was more than ready, as he registered the best save percentage (.945) and goals against average (1.50) in the league among goalies who played at least ten games. Going into the playoffs, Swayman is backing up Rask, who is perennially one of the best goalies in the league.

Despite a few hot streaks, the Bruins regular season was not as smooth as previous seasons. Before the trade deadline, the team was faltering, as they were struggling mightily to score goals and had fallen to fourth place in the East division. General Manager Don Sweeney knew the team needed some changes, so he brought in defenseman Mike Reilly from the Ottawa Senators along with center Curtis Lazar and most notably left winger Taylor Hall from the Buffalo Sabres. All in all, Boston lost just Anders Bjork (a depth forward who wasn’t getting much time in Boston’s lineup anyway), and a 2nd and 3rd round pick at the deadline.

Hall has had a roller coaster of a career up to this point. He was drafted first overall by the Edmonton Oilers in 2010, but despite playing well with Edmonton never reached the high and somewhat unrealistic expectations placed on his shoulders. In 2016, he was traded to the New Jersey Devils, and in 2018 promptly won the Hart Trophy for the league’s most valuable player as he carried New Jersey to the playoffs and recorded career highs in goals (39), assists (54), and points (93). However, due to the Devils’ struggles the next few years he was once again traded, this time to the Arizona Coyotes. After 35 unremarkable games in Arizona, he signed with the Buffalo Sabres in the 2020 offseason.

The 2020 season was disappointing to say the least for Hall and the Sabres. In his 37 games with the team, he registered just two goals and 19 points. Meanwhile, Buffalo plummeted down the standings to an end result of the league’s worst record. Many at the trade deadline questioned Hall’s motivation, and whether he could actually play winning hockey. The answer was abundantly clear in the ensuing month.

Hall scored eight goals and 14 points in his 16 games with Boston after the trade, which helped completely rejuvenate his career, and the Bruins Season. Hall seemed thrilled to be playing for a highly competitive team for the first time in his career. He told ESPN, “I do want to play here, not just for one or two more years … I was eager to join a playoff team, I was eager to join somewhere that had good culture, and where winning was sustainable. It showed me how fun hockey can be.” The Bruins ended up winning 13 of their final seventeen games to finish third in the East division and set up a date with the Washington Capitals in the first round of the playoffs.

Expected to be a physical, heated series between the two rivals, Boston vs Washington turned out to be a brief series instead. The favored Capitals took game number one at home in overtime, but the Bruins won the next four, closing out Washington in five games. The Bruins strengths were on full display in the series, as they gave up just ten total goals, and were able to shut down the Capitals high octane players. On the other end they peppered the Capitals trio of goalies with shots, and after game one never scored less than three goals in a game.

The win against the Capitals set up a matchup with the New York Islanders in the second round, a team that also upset their first round opponent in the Pittsburgh Penguins. The Islanders, a deep and scrappy team led by head coach Barry Trotz, went to the Eastern Conference Finals last season. After four games, there is currently no advantage in the series as the two teams have each won a pair of games.

Should the Bruins defeat the Islanders, the path to the Stanley Cup only gets more difficult. A matchup between the East division champion and the reigning champs Tampa Bay Lightning seems imminent. In the West division, heavyweights Colorado and Vegas are battling for a spot in the semifinals, and neither pose an easy matchup. North of the border, in the all Canadian division, Montreal and Winnipeg both shocked the hockey world by advancing to the second round, and have a lot of momentum behind them.

With aging stars and contracts soon to end, this season feels like it could be this group of Bruins players’ last deep run in the playoffs. They will have a tough road ahead of them, but right now, they have as good a chance as any team to bring the Stanley Cup back home.