Performances at Starlight Square and Their Impact on Cambridge 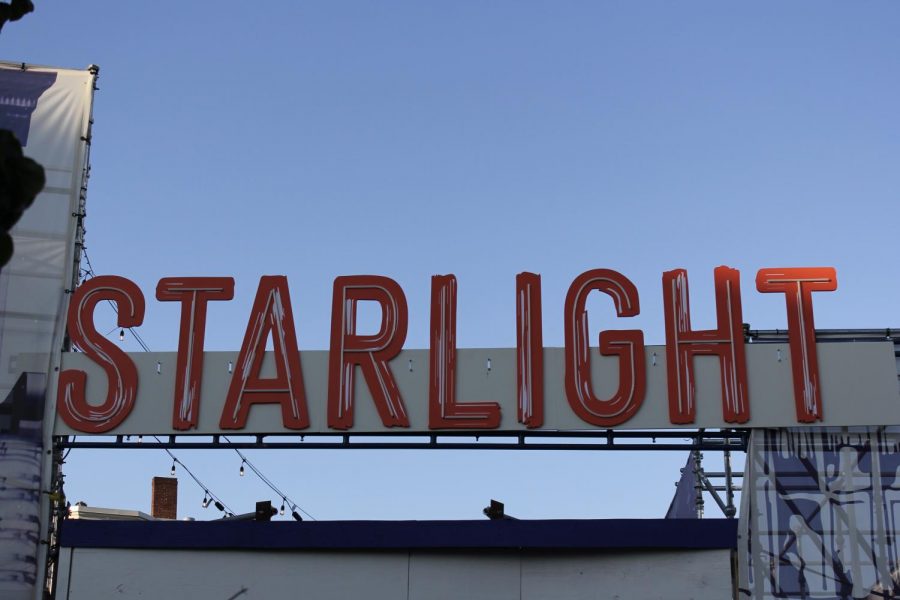 Starlight Square is a place where Cantabrigians can safely gather, restoring a sense of community.

Through the midst of the pandemic, it has been difficult for the public to find ways to socialize, entertain, and dine. Cambridge artists have sought ways of performing, with little to no success in finding professional, yet accessible and safe, venues. Cambridge created an area where the public can safely gather for community interactions: Starlight Square. Opened to the public in August of 2020, this temporary establishment is located in Central Square for outdoor performances, learning, dining, and dialogue. The Central Square Business Improvement District, Flagg Street Studio, and Boyes-Watson Architects all contributed to creating this space, utilizing a portion of Cambridge Parking Lot 5. Over the last few months, the Central Square team has truly brought Starlight Square to life, centering institutions in Central Square who lost access to indoor performance venues, as well as small businesses and community centers.

In early May, Starlight Square began Season Two of performances, during which music groups, organizations, and social justice movements can reserve the site for formal events and showcases. Due to extensive interest, Starlight Square had an application process in order for groups to request a time with the venue. In total, Starlight Square received over 200 event proposals, ranging from films to roller skating to community interactive events. Until October 15th, 2021, select showcases are occurring at Starlight, if the city does not extend the venue space. This summer, Starlight Square will be filled with all kinds of events for any member of the public to see.

Starlight, however, was not especially easy to implement. Nina Berg, a creator and Creative Director of Starlight Square, told the Register Forum that “It was quite the challenge, although we had a lot of support. The idea of a square in the Square has been around for decades.” When the idea was first introduced, it was imagined as an area that would go right through Graffiti Alley, in the heart of the city. Berg shared her pride in what the space has come to be, expressing that it has been a dream for her since 2008.

One of the recent showcases at Starlight Square was the Sunrise Cambridge debut event. An American youth-led political movement, the Sunrise Movement strives to stop climate change and create millions of well-paying jobs in the process. Many CRLS students have joined the new Sunrise Cambridge hub in support of this goal. Students and public attendees were excited to finally have an in-person event, after months of Zoom confinement. Chris Gould ’22, one of the youth speakers at the event, exclaimed that “Starlight Square was a parking lot a year ago. Now it is a beautiful venue where people can come together and share ideas. It is safe; it is definitely big enough to effectively socially distance.” Starlight has been transformed from an old parking lot into a colorful social network space, with pop-up stands, an area for eating, and a space for the stage and seating.

Cambridge Mayor Sumbul Siddiqui also enjoys having Starlight Square available, using the space for weekly “Coffee Hours with the Mayor.” These sessions have been an opportunity for Cambridge residents to meet with Mayor Siddiqui face-to-face, ask questions, share recommendations, and simply talk with an elected official during a time where many need access to resources and discussions. Mayor Siddiqui told the Register Forum that “Starlight is inviting and it’s also a way for community members to support small businesses. I’ve loved having office hours and bringing more residents to enjoy the space.”

In May, music ensemble Lenny’s Funk Club, a band with both CRLS students and CRLS alumni, performed at Starlight Square. Lenny’s Funk Club had not performed in over a year due to the pandemic circumstances, and Starlight Square was finally a space where the group could have a concert. Ellen Jacobson, a CRLS senior, drummer of the band, and Technical Director of the World Jazz Ensemble at CRLS, stated, “I loved playing with my bandmates again in a more professional setting, including the fact that it was Lenny’s Funk Club’s first proper gig that we did ourselves without a teacher organizer. It was really nice to be able to coordinate together and put on a performance for Cambridge residents.” Performing at Starlight Square again on June 29th, Lenny’s Funk Club looks forward to performing again for community members and working with the coordinators of Starlight.

As demonstrated by Cambridge residents, Starlight Square is a “light” during this challenging time. To Berg, “What you see at Starlight today—the performance venue, public art, and Popportunity—is the product of a team effort by many people who love Central Square.”