Top Stories You May Have Missed 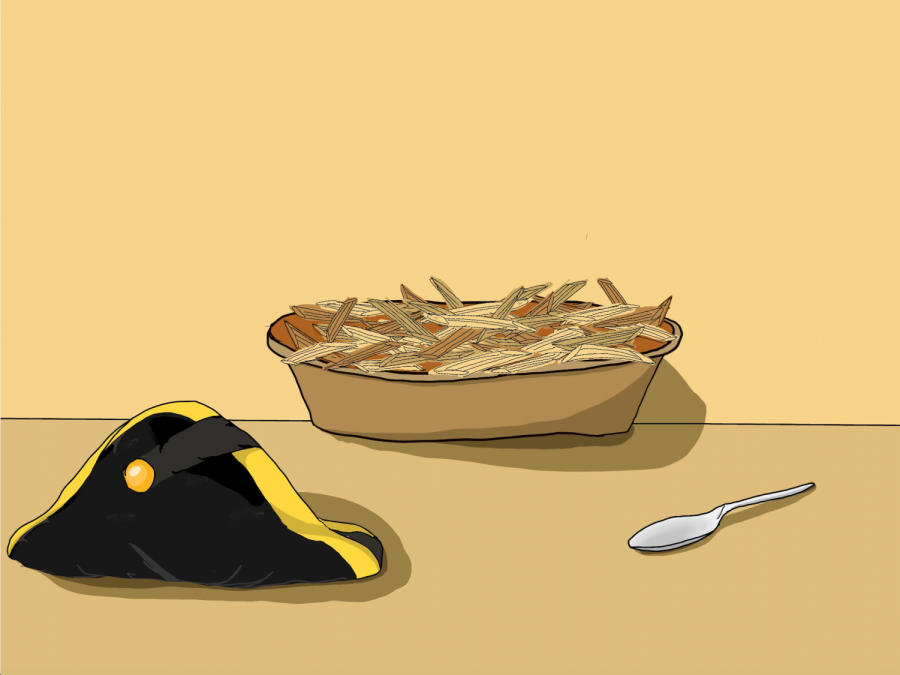 Note: Most names in this article have been changed to protect the anonymity of those featured.
Can we trust Club 4? The Buffalo Chicken Pasta Scandal Explained.
“I can still taste it,” recalled Shelley Rumpus ’22. In a private interview with the Register Forum, Rumpus recounted a traumatic incident with an unnamed member of the 2018-19 Club 4 leadership team.

“It was so weird. The Monday after my first shift, I was walking through the hallway that leads into the Media Cafe when [they] just started, like, physically forcing me to eat that disgusting buffalo chicken pasta they used to serve on Wednesdays. I was terrified and just so confused.”

“Walking down by that part of the school always brings back bad memories, so I have to eat in the main cafe now,” said Rumpus through sniffles and tears. “The food is honestly better there anyway so I guess I don’t mind.”

This year, Rumpus applied to fill one of the new Club 4 leadership vacancies, hoping her story will change the culture and trajectory of CRLS’s most popular community service group for the better.
Senior Files Incident Report Against Overconfident Sophomore
Disclaimer 1: The Register Forum is committed to socially mindful journalism, and avoids trivializing students’ struggles at all costs. As such, this piece was written with consultation from two prominent members of CRLS’s indispensable short community.

Disclaimer 2: Some quotes containing profanity have been slightly modified for publishing.

One message is all it took to provoke Hugh Mungus ’21 to take drastic measures and press charges against a sophomore in his AP Chemistry class. The text in question?

“ur so much shorter than you looked on zoom lmaoooo.”

In an interview with the Register Forum, Mungus exclaimed, “I just couldn’t take it anymore. The kid is completely irrelevant but has the nerve to say dumb sh*t like that. Dead*ss had to look up his name on the class roster to file the report.”

Towering at 5′ 3.25″, Mungus has had his fair share of run-ins with distasteful comments regarding his fight with vertical deficiency. Often referred to as the most “down to earth” of his friend group, those close to Mungus often call him by endearing nicknames such as “Shawty,” “Stocking Stuffer,” “Oompa Loompa,” and “Munchkin.”

Mungus filed the report under hate crimes, verbal assault, and defamation, although it remains unclear whether school administration will choose to act on the allegations.
Seniors Hold On to What Remains Of Their Childhood: Spoons
As the Class of 2021 prepares to move on to the next phase in life, many graduates have cried out in sorrow over the gaping hole in their high school experience that can only be filled by the Spoon Game. Some seniors have taken it worse than others, such as Bike Club President, Gabriel Traetti ’21: “I understand that it would’ve been difficult to make the game happen given the current circumstances in which we are going to school, however I wish the school administration and student government did much more in making the end of the year for seniors enjoyable.”

Others have opted to remain in denial, clutching to plastic utensils from Broadway Market as though they were the last remnants of their stolen innocence. This prolonged renunciation of reality has started driving some participants in the unofficial Hunger-Games-style showdown into madness. One anonymous senior was reported to local authorities as feral after they were seen hissing and waving their spoon at groups of tourists in Harvard Square.

If you happen to see any rampant spoon-wielding seniors, please do not hesitate to contact Animal Control Services or the Cambridge Police Department at the non-emergency number +1 (760) 706-7425.