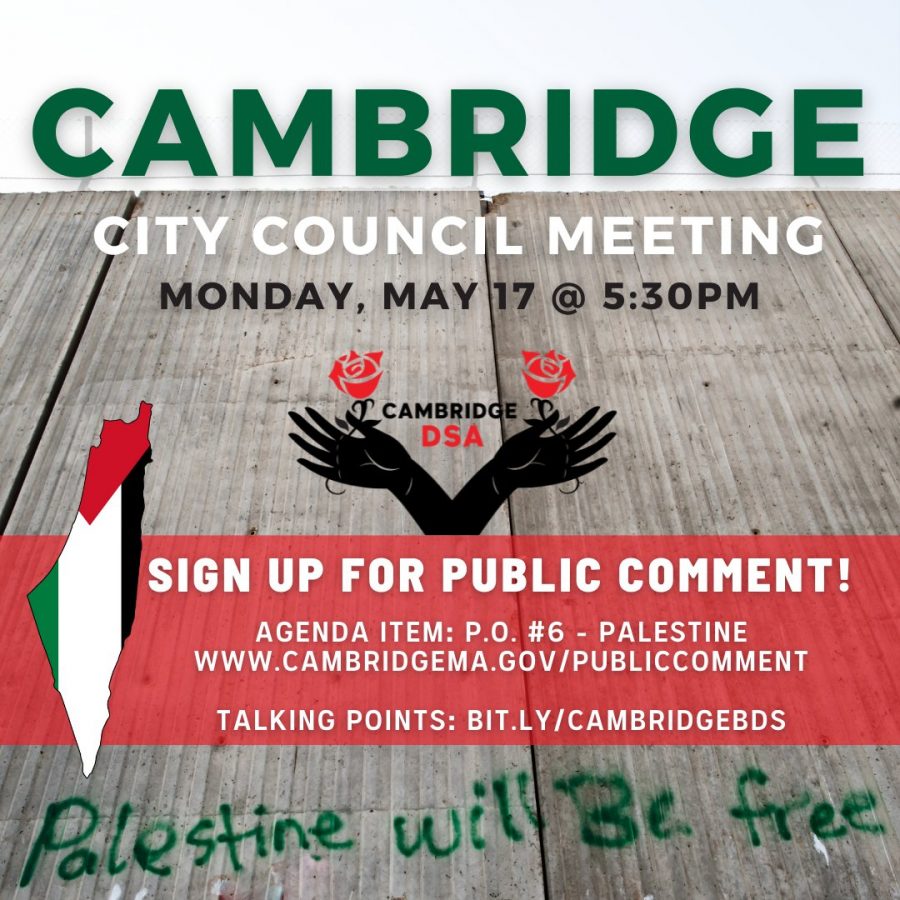 The United States maintains its enduring battle to suppress local Palestinian resistance to Israel, and Cambridge has just become the most recent city to join in. In May, the Cambridge City Council voted to pass an edited Policy Order #109, a resolution that originally called for the boycott of companies “abetting [Israeli] apartheid in the Middle East.” The resolution included the technology group Hewlett-Packard Incorporated as one of the many American companies in active support of Israel, which provides computer software and internet services to the country. These technologies are a fundamental component of the checkpoint barrier system which is used by the Israeli Security Forces, often utilized as a method of harassment and humiliation of the Palestinian population.

This boycott proposal would have given Cambridge the chance to put pressure on Hewlett-Packard to end its assistance of Israeli apartheid, and was inspired directly by the strategies of the Boycott, Divestment, Sanctions (BDS) activist movement for Palestinian justice. After a period of public testimony which lasted over seven hours, with hundreds of citizens voicing their thoughts on the bill, the original language of Policy Order #109 was voted down. The Cambridge City Council then settled on a more tepid substitute policy order condemning violence on both sides, which council member Patricia Nolan called “something that can bring us all together.”

Similar to the Black Lives Matter movement in the United States, BDS is a broad social justice campaign, which seeks to promote the state of Palestine through opposition to Israel. Modeled after the anti-apartheid movement which occurred in South Africa, it uses nonviolent economic methods of protest to counter Israel’s occupational regime in the Palestinian Gaza Strip and West Bank, which members of the movement have labeled as illegal under international law.

South Africa and Palestine share more in common than just the inspiration for BDS, however, and they have a little-known connection rooted right here in the city of Cambridge. While the United States was one of the last countries to turn against the racist apartheid regime of the South African government (finally doing so in 1986), it was Cambridge that had an especially prominent involvement with it. Councillor Quinton Zondervan of the Cambridge City Council, one of the leading proponents of the original BDS resolution, compared the history of Cambridge-based film and camera corporation Polaroid’s role in South African apartheid to current companies like Hewlett-Packard in their support of Israel. “Polaroid had a government contract to produce the photos used in the passbooks that non-white South Africans had to carry at all times,” Zondervan told the Register Forum. “Hewlett Packard supplies the technology, including facial recognition, which is used to confine and control Palestinians.”

Beginning in the early 1960s, the local government in Cambridge was reluctant to take any measures against Polaroid’s support of the repressive government, or even to inform the public about Polaroid’s relationship with South African authorities. In the early 1970s, a movement initiated by employees at Polaroid who had learned about the company’s actions, called the Polaroid Revolutionary Workers Movement (PRWM), was able to spread this information to the outside world. By 1979, they had grown enough popular support within the city to win a referendum that finally called for divestment from South Africa. Soon after, with the threat of financial loss on the line, Polaroid became the first major U.S. company to break ties with the apartheid government, and others followed. More than four decades later, PRWM’s leader and founder, Caroline Hunter, testified in support of a similar path in regard to Israel. A referendum on the Israel-Palestine conflict has yet to come, however, and Cambridge’s policy towards the country remains in the hands of local politicians.

For the Cambridge City Council, a boycott on Hewlett-Packard and other supporters of Israel could mark the chance to place themselves on the right side of history this time around. While Israeli authorities continue to bomb innocent Palestinian civilians in the Gaza Strip, create intrusive settlements in the Occupied West Bank, and deprive Palestinians of necessary food and water, it is the United States government and its many private contractors which have enabled Israel to become the perpetual aggressor in the region’s conflict. Cambridge has a real chance to put pressure on these institutions—who have received little to no pushback thus far—and to reverse the support of apartheid which they have historically permitted.

Still, it will not be easy to do so, as there is another glaring factor at the center of this that has prevented BDS from gaining political support in Cambridge, and in all levels of government throughout the rest of the country. “We have to keep in mind that most Cambridge residents who spoke were supportive of [the BDS resolution], and much of the opposition was organized by astroturfing lobbyist groups from outside Cambridge,” explained Zondervan. “The Israeli government has a very powerful lobbyist industrial complex protecting its image in the United States.” While Jewish political groups such as the Anti-Defamation League and the American Israel Public Affairs Committee will denounce this claim as anti-Semitic, it is indisputably accurate. According to Human Rights Watch, twenty-seven states have now adopted laws that officially penalize groups or individuals who participate in some form of boycott against Israel; a result of constant pressure from the Israeli government and its donors. Additionally, states like Georgia have attempted to pass laws to ensure that teachers, lawyers, journalists, and even students are not engaging in dissent against Israel. The American Civil Liberties Union has denounced this legislation as an infringement on the country’s First Amendment rights, which “violates civil liberties and waters down genuine efforts to address the real threat posed by bigoted ideologies, including anti-Semitism.”

The Israeli lobby has managed to pervade almost every political issue in this country that involves Israel, and the extent to which they regard the Constitution or the civil rights of Americans is almost none. Ultimately, the American and Israeli governments’ political opposition to BDS is a lot less about the conflict in Israel-Palestine than it is about a massive violation of freedom of expression. Although politicians on both sides of the aisle will tout the ideals of free speech in their campaign rhetoric, they have joined together almost uniformly to support a bipartisan suppression of BDS protests, and Cambridge is another local government that has allowed Israeli interest groups to prevail over the voice of the people. If legislatures across the country don’t begin to stand up to this heavy pressure from pro-Israeli entities, and support the right of citizens to dissent on any matter, valuable criticism of Israel will continue to be drowned out, and apartheid will continue to rage.