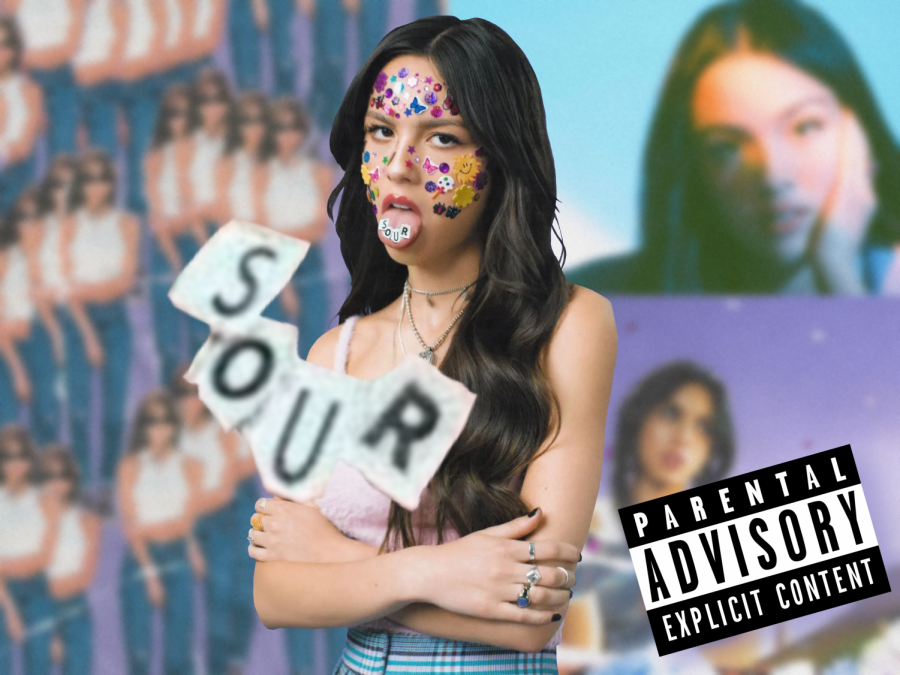 Olivia Rodrigo was only seventeen when she began negotiating deals with massive record labels. Following the Tik Tok-prompted success of her self-written track “All I Want” from the Disney+ original High School Musical: The Musical: The Series, Rodrigo’s team proposed an immense 10 million dollar deal by an unnamed record label. Many labels commended her potential to become a superstar, should she follow the same trajectory as fellow Disney-stars turned pop stars. This approach did not appeal to Rodrigo, however, who has said in interviews that she has always wanted to be considered as a songwriter first, and pop star second. The young artist instead signed to Geffen Records, who praised her songwriting rather than her superstar potential. Her strong pursuit of songwriting quickly led her to superstardom nonetheless with the release of her debut album, SOUR, in May 2021. The album has broken the record for the biggest female streaming week of all time for an album on Spotify, surpassing both Ariana Grande’s Thank U, Next and Taylor Swift’s folklore.

SOUR is a loose-concept album emulating the diary of a teenage girl following the end of a relationship. Full of energy and passion, the tracks are authentic to teenage experiences that so many can empathize with. Olivia succeeds where other artists fail: executing youthfulness through music. She never sounds as though she is trying hard to be relatable; rather, it comes naturally with the juvenile themes of the album, such as the experience of feeling jealousy towards strangers on social media, or feeling like you don’t relate to the media-portrayal of teenage years being the best. Album opener “brutal” accomplishes this well, it’s a Gen Z anthem about experiencing self-loathing as a teenager. Rodrigo falls into the category of “anti-pop” where she challenges the glamorization of life in pop music, with lyrics like, “I’m so sick of seventeen/Where’s my f—ing teenage dream?”

As “brutal” calls to predecessors like Lorde and Billie Eilish with their outsider-like themes, Rodrigo is generally not afraid to wear her influences proudly. “Jealousy, jealousy,” a highlight from the album, features a tastefully-chaotic piano section in its bridge that Rodrigo mentioned was inspired by the likes of Fiona Apple. On the track, Rodrigo’s voice drifts in and out of singing and yelling, not far different from a vocal track you would hear on Fiona Apple’s latest album Fetch The Bolt Cutters. Elsewhere, hear Rodrigo’s inspiration from Taylor Swift, on the bridge of “deja vu” or the background piano on “1 step forward, 3 steps back” interpolated from Swift’s 2017 track, “New Year’s Day.” It is clear throughout the album that Rodrigo is a product of the 2000s, whether it’s on the pop-punk salute to Paramore, “good 4 u,” or the reference to the hit television series Glee on “deja vu”—Rodrigo wants younger listeners to know that she is one of them.

Rodrigo already shows the markings of a great songwriter, with two songs on SOUR being completely self-written: “enough for you” and “happier.” The former features a stunning vocal performance of bitter lyrics detailing the end of a relationship that felt one-sided, with lines like, “Someday, I’ll be everything to somebody else/And they’ll think that I am so exciting/Then you’ll be the one who’s crying.” The latter, “happier,” sounds like an instant breakup song classic, with a simple but catchy hook where Rodrigo sings, “Find someone great, but don’t find no one better/I hope you’re happy, but don’t be happier.” The simplicity of her lyrics makes them easily universal.

The production on SOUR is similar to the songwriting in its simplicity. While this is good in many cases, by showcasing Rodrigo’s songwriting at the forefront, it can cause some songs to feel underwhelming and underproduced. By the time “happier” is played in the tracklist, both “traitor” and “drivers license” have already featured similarly sparse productions with only piano, drums, and synths. The sole guitar finger-plucking on “enough for you” and “favorite crime” is beautiful, yet it doesn’t match the energy of the emotive stories both songs tell.

With 11 tracks and a run-time of only 34 minutes, SOUR is a relatively short album. This is not necessarily a bad thing, it is just a completely different direction than the initial single “drivers license” pointed to. The song, which became a hit within days of its release, is a slower, more drawn-out piano ballad, and ended up being the longest song on the album with a runtime of roughly four minutes. This might be a decision made in an effort to boost streaming numbers, a trend that both pop and hip hop music is currently facing while adjusting to a new industry that is stream-reliant—shorter tracks take less time to stream, thus albums with shorter tracks are able to achieve the same number of streams as standard albums in a shorter period of time. The penultimate track “favorite crime” has some of the most compelling lyrics on the album, yet feels cut short, and therefore unfinished. In the song, Rodrigo uses a metaphor of a crime scene to detail the toxicity of a relationship, with lyrics like, “I watched as you fled the scene/Doe-eyed as you buried me/One heart broke, four hands bloody.” The song is well-written as is, but only feels surface-level compared to where the lyrics and story had the potential to go if given more time.

Had SOUR gone in the direction of longer ballads like “drivers license,” Rodrigo’s true talent in songwriting could have had more of an opportunity to be showcased. It is important to consider, however, that SOUR is only Rodrigo’s debut album, and she still has years left in her career to perfect her craft. With the unprecedented success of SOUR, this will definitely not be the last we hear of Rodrigo, and it will certainly be captivating to watch her career unfold.