The Register Forum • May 30, 2021 • https://registerforum.org/14203/arts-entertainment/spotlight-on-asian-artists-and-recommendations/

Spotlight on Asian Artists and Recommendations 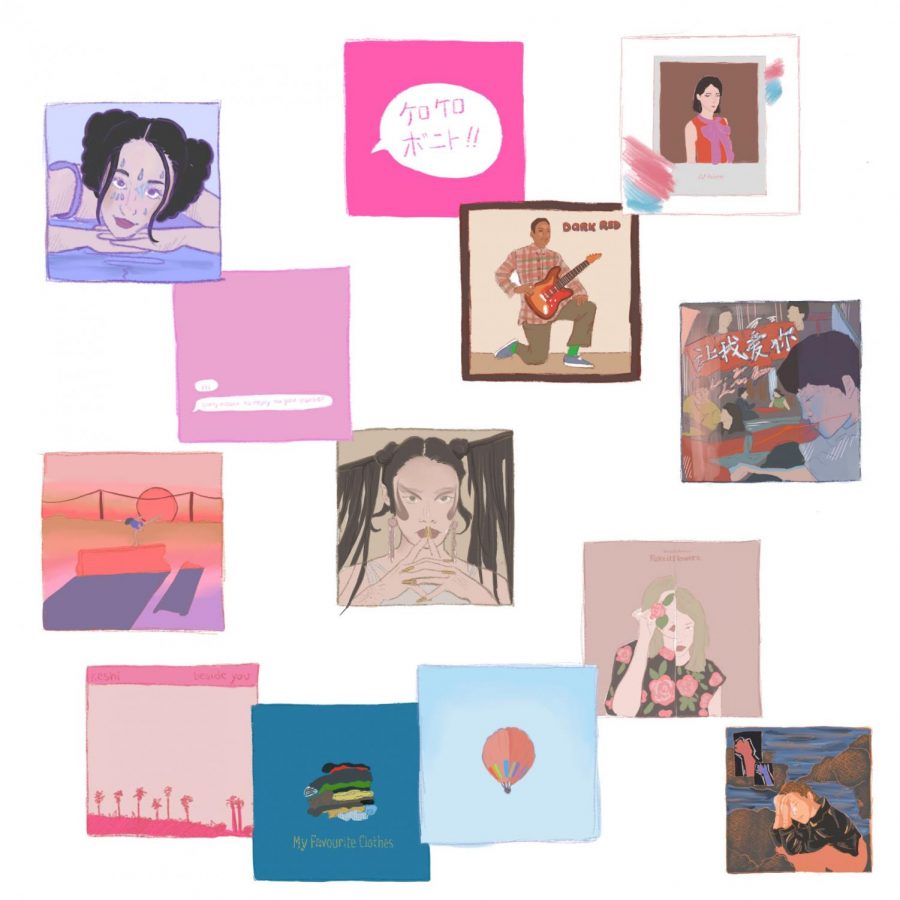 It is no secret that Asian representation in the Western music industry has always been lackluster. Just this year, Olivia Rodrigo—Filipino-American singer and actress—became the first Asian woman to top the Billboard Hot 100 chart in its 63 year history. Prior to Rodrigo, just three other artists of Asian descent had topped the chart in the last decade: Bruno Mars, Far East Movement, and BTS.

As Asian American and Pacific Islander Heritage Month wraps up, it is important to continue uplifting Asian voices in the media that we consume every day. This list was compiled in an effort to do so. You can check out the full playlist of songs mentioned in this list here.

“A lot of my music talks about growing out of these really traumatic experiences,” said Raveena Aurora during her appearance on Tiny Desk to promote her critically acclaimed debut album, Lucid. The Indian-American singer has become well known for her unique take on R&B with additions from her South Asian background. “Mama,” a highlight of Lucid, is a tribute to her mother, but also immigrant mothers in general. Raveena’s soft and sultry voice highlights wistful lyrics like “I will always wonder / Who you really were before me / What did you lose? / I hope, nothing too soon.” Check out Raveena’s latest single, “Tweety,” which showcases her more upbeat side.

Malaysian singer Alextbh has frequently talked about struggling with feeling pressured to have to represent his country in an industry with little Malaysian presence. In an interview with V Magazine, he said “When you think of Malaysian pop stars or any huge Malaysian celebrity or just anyone that people look up to, there’s not a lot of people that are known internationally.” Alextbh is also a prominent advocate for the LGBTQ+ community with songs like “no space” and “Between,” powerful pop anthems that delve into his sexuality and queer identity.

Filipino American singer Jay Som is a master of the bedroom-pop genre, a softer and unrefined take on pop music. Her critically acclaimed album Everybody Works, recorded from her bedroom studio, was the subject of praise with sharp songs like “Baybee” and “Lipstick Stains” that defy the traditional pop genre. The album received rave reviews from esteemed publications such as Pitchfork, which gave it the prestigious ‘Best New Music’ label.

Kero Kero Bonito, British-indie band led by Japanese British singer Sarah Midory Perry, has been making some of the finest songs of the indie-pop genre since 2011, often combining elements of post-punk and J-Pop into their music. Their most recent projects Civilisation I and Civilisation II feature catchy and captivating songs like “When The Fires Come” and “21/04/20.”

Rina Sawayama’s debut album Sawayama received rave reviews from critics, becoming the highest rated debut album of 2020 with a metacritic store of 89, indicating ‘universal acclaim’ on the website. The Japanese British pop star already has hit-like material under her belt. Despite being some of her first works, tracks like “Tokyo Love Hotel” and “Bad Friend” already sound like potential radio hits. On “Dynasty,” she sings about the topic of generational trauma using guitars influenced by Evanescence.

Steve Lacy, 22, already has a Grammy underneath his belt for producing “Pride” off of Kendrick Lamar’s 2018 effort DAMN. However, when Lacy takes the centerstage, he crushes it on tracks like “Only If” and “Like Me”—the latter sees him open up about his experience with pansexuality.

You probably have already heard Beabadoobee, maybe without realizing. The Filipino British singer’s song “Coffee” was sampled on the viral tik-tok sensation “death bed (coffee for your head)” which has amassed over 1 billion streams. However, Beabadoobee’s discography is undoubtedly worth checking out, with tracks like “If You Want To” and “Care” which offer a different upbeat ‘90s rock sound. Beabadoobee is also a master of a slower, sadder sound shown on songs like “Disappear” and “Angel.”

Recently featured in the teaser for Marvel’s upcoming film Shang-Chi and the Legend of the Ten Rings, Got7 member Jackson Wang is the next huge mainstream crossover to keep on your radar. Wang’s latest single, “LMLY,” is definitely worth checking out if you enjoy mainstream pop/R&B.

UMI, born in Seattle to an African American father and Japanese mother, started writing songs at the age of 5 and began pursuing a career in music in high school. Songs like “Picture Perfect” and “Love Affair” are examples of how UMI effortlessly creates atmospheric R&B songs, essentials to every upcoming playlist you might be creating for summer.

Rini, a Filipino Australian R&B singer, has been gaining traction for his relaxed sound, inspired by the likes of R&B contemporaries Daniel Caesar and Frank Ocean. You should check out “Out of the Blue” and “My Favourite Clothes,” both commanding in their soft, summery vibes.

Korean pop idol IU is already massive in her home country, having amassed over 25 number one hits on the Korean digital chart. However, she has a softer and more nuanced sound than many of her contemporaries, on wonderful songs like “dlwlrma,” or “My sea” off of her latest LP LILAC.

Vietnamese American singer Keshi has all the markings of a great indie artist, with dreamy instrumentals and vocal stylings similar to fellow indie-contemporary Rex Orange County. Check out “drunk” and “beside you,” both career highlights that will get you instantly swept away by Keshi’s musical presence.

Cehryl described her song “angels (emily)” as “announcing to someone that you would do anything to change yourself for someone else/something, and asking them what it is.” The singer from Hong Kong displays this sort of emotional maturity on other acoustic masterpieces like “outside the party, inside the dream” and “Dead Knot.”

Check out additional artists in the playlist here.