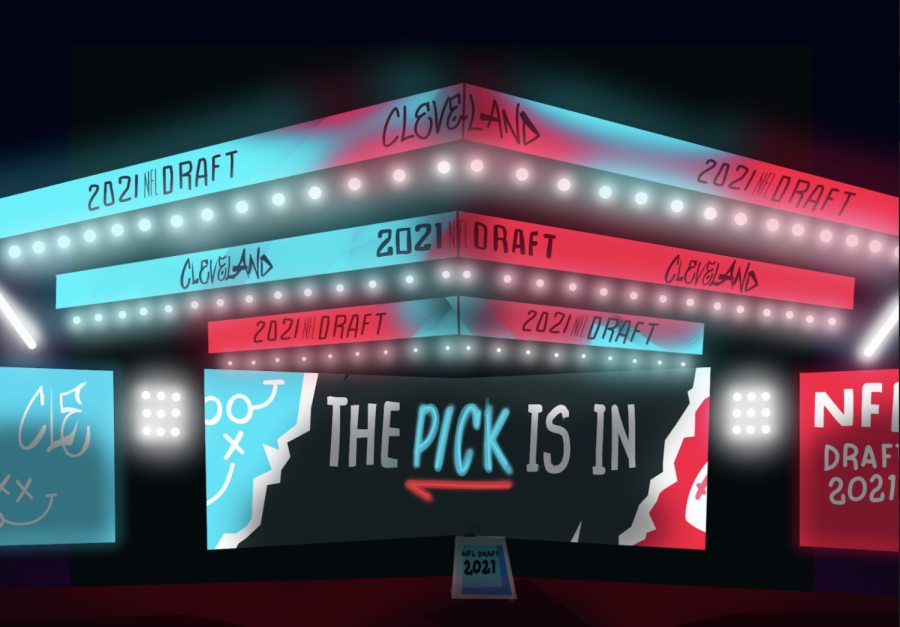 The first round of this year’s NFL draft is scheduled for April 29th. Here are my predictions for how it will play out:

This is the biggest no-brainer of the draft. Lawrence is regarded as a generational quarterback prospect in the realm of Andrew Luck, Peyton Manning, and John Elway. It would be foolish for Jacksonville to even think of any other player with the first pick.

Wilson has shot up draft boards in recent months as the BYU product has showcased his athletic ability. His ball placement and the level of competition he faced in college are noticeable downsides when looking at his college years, but Wilson’s arm talent gives him all the upside needed to justify taking him at the number two spot.

Jimmy Garappollo was ultimately one of the weak links on a roster that almost won the Super Bowl in 2019. When the 49ers traded up with the Dolphins to get the third overall pick, it was fairly obvious that they were targeting the quarterback position. Justin Fields provides plenty of athleticism, arm strength, and several big performances (including in last year’s Sugar Bowl, where he went toe-to-toe with Clemson QB Trevor Lawrence).

Kyle Pitts is the best tight end prospect in recent memory. The Florida product has an elite blend of size and speed that allows him to line up all over the field and create plenty of mismatch opportunities. The possibility of pairing Pitts with an already stellar duo of Julio Jones and Calvin Ridley is too tantalizing for Atlanta to pass up.

Despite pressure to use their first round pick on a tackle (after quarterback Joe Burrow went down with an ACL tear last year, which many have blamed on poor offensive line play),  Burrow has reportedly asked the Bengals front office to reunite him with Ja’Marr Chase, his top receiver at LSU. After adding Riley Reiff alongside Jonah Williams, tackle isn’t as high of a priority as it may seem; yet, it is still imperative for the Bengals to target an interior offensive lineman later in the draft. After an outstanding pro day, Chase has put away any doubts of his ability following a year that he opted out of due to the pandemic.

After trading back up to number six overall, the Dolphins most likely had the intention of going after Sewell or Slater. If Chase makes it past the Bengals he could be a target here, but after signing Will Fuller, wide receiver is less of a priority for Miami.

After an uncharacteristically aggressive offseason by Head Coach Bill Belichick, a long term solution at quarterback is the only significant remaining question for the Patriots. Lance’s arm talent and rushing ability provide him with plenty of upside in the NFL, but after missing out on this past season and playing weaker competition in general at North Dakota State, Lance is seen as more of a project quarterback. In New England, Lance will likely sit behind Cam Newton—a veteran with a similar play style—for his first season before he would be ready to assume the starting job.

With Mitchell Trubisky officially out of town, the Bears are yet again in search of a quarterback, as their signing of an aging Andy Dalton is not the long term solution in Chicago. Mac Jones has been praised by many for his intangibles and he could benefit from a year behind Dalton.

The Broncos have a hole at inside linebacker and the versatile and athletic Micah Parsons is the perfect man for that job. Denver may look to secure a quarterback in the first round, but they seem likely to give Drew Lock one more year to prove himself.

With a healthy Dak Prescott early in the 2020 season, the Cowboys offense lit up the scoreboard while the defense, especially the secondary, let opposing teams to do the same. Surtain II could be the lockdown corner desperately needed in Dallas.

After signing Kenny Golladay and bringing back Nate Solder, New York’s focus shifts to adding an edge defender to pair with Leonard Williams. Jaelan Phillips offers plenty of upside as a former five star recruit. Phillips had plenty of injury issues at the start of his collegiate career, but he battled through to end his junior year hot.

With Alshon Jefferey and DeSean Jackson leaving, Philadelphia will look to recoup some young talent at the position, providing Jalen Hurts with more weapons than an already disappointing Jalen Reagor. Despite winning the Heisman award and putting up a monster first half in the college football championship, Smith will likely fall in the draft due to questions about his skinny build (170 pounds).