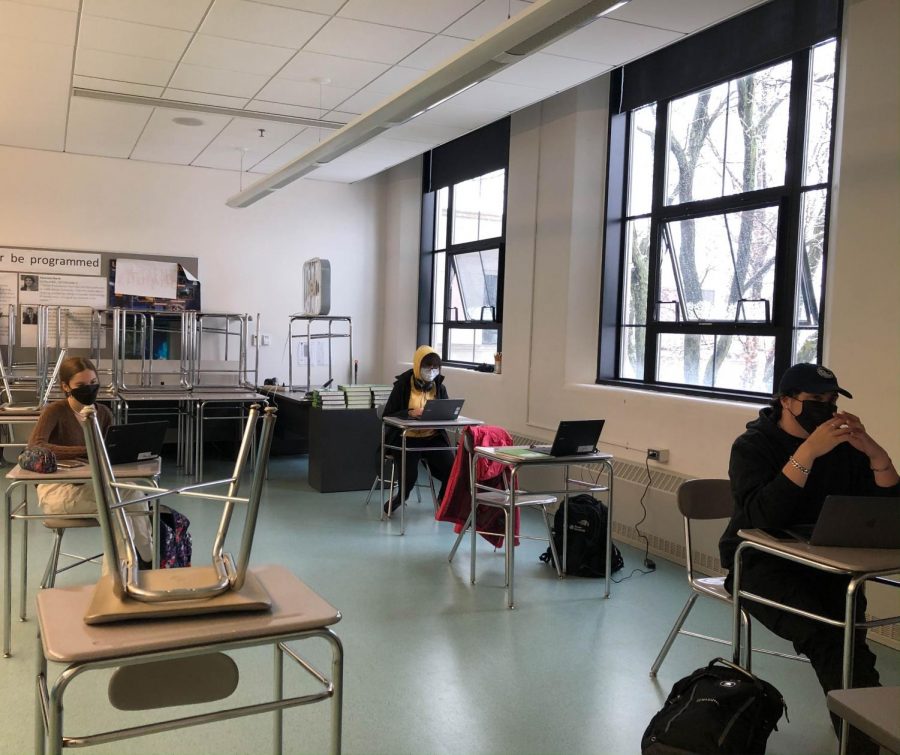 The social consequences of COVID-19—as well as the unprecedented culture it has created in nationwide public schools—have reached and affected students of all ages. In order to narrow in on the freshman class of CRLS in particular, a mental health survey was assembled by the Register Forum and administered in 9th grade health classes. The survey consisted of only a few questions—most asked participants to rate an aspect of their school experience on a scale of one to ten (in hopes of attaining a more “by the numbers” method of reporting), but the final few prompts allowed ninth graders to elaborate further. In order to encourage honesty and respect privacy, names were promised to be omitted from the article.

Unsurprisingly, reports on the freshman experience amidst the pandemic were overwhelmingly negative. Among the most reported downsides to online school as a freshman was the glaring lack of community within the class: “Everyone always told us how we were going to meet tons of new friends in high school, but honestly, I feel like we might as well still be at five different schools,” one participant said. The general consensus was a widespread feeling of unease and unfamiliarity with the people they’ll graduate with: when asked to rate their ability to interact with their classmates on a scale of one to ten (with higher scores indicating a higher capability), the median rating was three. “There are people who I will never talk to, despite seeing them for the entire first semester,” said a respondent. And the usual remedies to feeling disconnected, such as expanding one’s social circle and participating in extracurriculars, have been crippled by COVID-19 as well, with clubs now meeting almost exclusively online. The effect that the pandemic has had on the mental health of the freshman class was fairly substantial, as 77% of those that took the survey reported that online school had a negative impact on their mental well-being.  A lack of integration and social interaction was likely the main takeaway of the survey, with one freshman in particular stating it best: “I won’t take personal interaction for granted. Throughout the rest of high school, I will feel like I am making up for lost time.”

In-person learning, however, is projected to improve this widespread feeling of disengagement. With the current plans to return to semi-normalcy in CRLS by May, save for social distancing and various sanitary measures, social interaction can happen organically among the underclassmen. Outside of the survey, the Register Forum interviewed a handful of students on the topic of starting fresh with in-person classes. “Making friends was really important to me, and I only just now made a few since starting in-person school,” said Ashlynne McBride, a freshman. However, even in the current hybrid learning system, it appears that CRLS administrators have the potential to greatly impact socializing among 9th grade students; seeing as public schools have been in largely uncharted territory ever since the COVID-19 outbreak, it’s to be expected that every teacher has a different approach. “Comparing remote learning to in-person is really hard because the in-person experience varies so much from class to class.  Some teachers make it feel like a real classroom and let us talk and have a normal in-person class, but in others it feels like remote learning in a less comfortable chair. It’s really up to the teacher; if they want to make it great, then it is,” remarked 9th grader Rivka Zickler. Teachers and other school officials will likely have a much larger role to play for this year’s freshman class in the upcoming months, not only in large-scale decisions, but also in day-to-day classroom activities.

Despite the many downsides to experiencing ninth grade through Zoom calls and half-days, responses to the very last question (“How do you think this year of online learning will affect your outlook on the rest of high school?”) reflect a hopeful outlook towards the remainder of high school, as well as a newfound appreciation for the in-person experience of years past. Many 9th graders see the 2020-2021 school year as an interim of sorts—asserting that “high school will feel one year shorter”— and look forward to a return to normalcy as most of us do. “I’m gonna be more appreciative of the fact that I can walk the halls and see and meet people and actually be in high school, not just the Zoom calls made at home disguised as high school,” stated a participant. This newfound sentiment may signal a potential for a new student culture post-pandemic. “This year has definitely changed how I think of high school, not to mention the rest of my life,” said a student, “If I knew that March 12th was going to be my last day of 8th grade, there would have been so many things I would have done differently, and I don’t want to look back on high school and feel the same way.”