Biden Must Not Engage In A Cold War With China 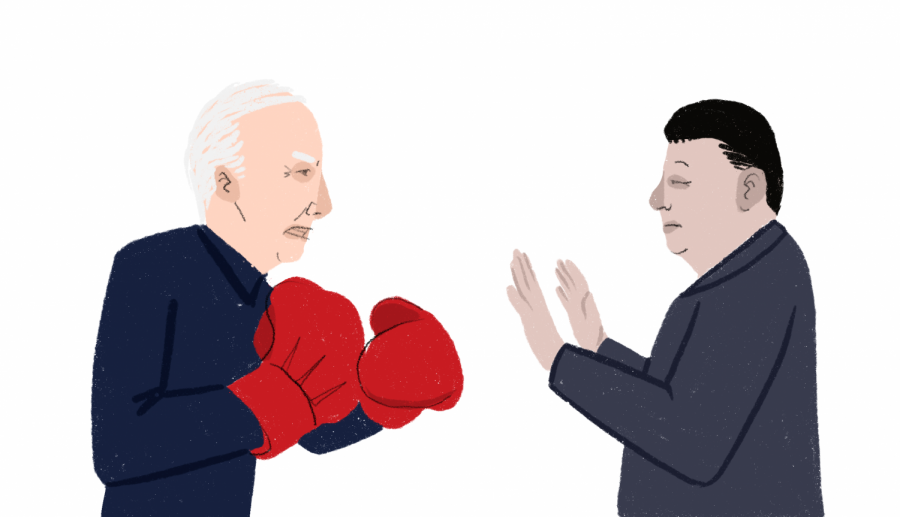 Economic ‘wars’ can have vastly negative impacts on those involved, and the US is playing with fire by igniting a new one. In 2019, Trump was criticized for the trade war he launched against China, and rightfully so. According to Brookings, this dispute cost the United States 300,000 jobs; Bloomberg found that this war reduced the US’s Gross Domestic Product (GDP) by 0.07% and lost companies over 1.7 trillion dollars in stock value due to China’s tariffs. In the same year, China’s retail goods market beat the US’s, also beating the US in the highest foreign investment rankings. China is on track to become the biggest economy in the world by GDP by 2028, a timescale hastened by the pandemic and China’s relatively fast economic recovery. Posed with this likelihood, President Joe Biden stated in March, “That’s not going to happen on my watch because the United States is going to continue to grow.” Yet, Biden contradicts himself when he admitted that Trump’s trade war was detrimental to the US job market but still aims to escalate tensions with China to the level of an economic cold war. Biden’s team does not comprehend that the two powers, in this case, are considerably different: the US and China’s economies are co-dependent at a level never seen in the US-Russia cold war. Moreover, the US needs allies that are not dependent on this coupled Sino-American economy. Because of this, it is unclear that garnering true support against China is feasible.

Even with support, China is in an advantageous position regardless. Considering the pandemic’s effects on the US, it is certain that an engagement in a cold war of sorts will be dangerous. The US is doing exactly what caused the Soviet Union to crumble: ignoring its people and engaging in costly wars like those in Iraq and Afghanistan. In contrast, China has remained isolationist for the last 40 years. As the US is becoming less educated, less wealthy, and older, China’s trends are the opposite. In fact, China has had its most significant increase in human development and wellbeing in the last 4,000 years. Undoubtedly, in a new cold war, our role is more likely to follow the fate of the Soviet Union.

The leader of China, Xi Jinping, has warned against Biden’s early suggestions of wanting such a battle. Upon taking office, Biden immediately proposed to the EU that they should squeeze China out of the global technology trade. Then, he attempted to collectivize democracies against China. Xi cautioned against this, stating that “if we walk down the path of confrontation—be it a cold war, a hot war, a trade war or a tech war—all countries are going to suffer in terms of their interests and their people’s well-being.” Yet this warning has not been echoed in the US media. Instead, the story has been shaped into an “us vs. them” narrative. Claims made in a recent New York Times article state that “as President Biden predicts a struggle between democracies and their opponents, Beijing is eager to champion the other side.” Allies of the US also seem to see a more nuanced story, and there has been great reluctance towards such a confrontation with China. Unlike the Cold War which began in the 1940s, the current globalized economy does not lend itself to a simple ideological battle, proxy wars, and technological races. Yet, media outlets like The New York Times try to reduce the US-China tensions to those of the old Cold War.

Nevertheless, the pressures are higher than ever before. According to diplomatic analyst Jonathan Marcus, the BBC indicated that US and China officials meeting in March revealed that “relations between the US and China are the worst they have been for many years and look set to become worse still.” Even more, he cautioned that all countries should “buckle up” and brace themselves; given how intertwined the US and China are, it could get messy. Yet, this will only happen if Biden continues on his one-sided crusade towards a cold war with China, especially when there are other paths towards addressing the US’s qualms with China, such as decoupling. According to the Harvard Business Review, decoupling the two economies by rerouting supply chains to different countries, regulating investment into the Chinese economy, and reducing US presence in Hong Kong will gradually enable the US to become independent of China. The US will be less complicit in the Uyghur forced labor and potentially more protected against the intellectual property matter that the US abhors. Having more oversight on production can ensure that no technology is stolen or counterfeits produced at a lower cost. In contrast, a new cold war will do nothing but accelerate the waning economic and political dominance of the United States on the world stage. Biden’s fierce stance could be growing pains, but likely not. Thus, Americans shouldn’t mistake an impending cold war as anything but worrisome.