Gender Discrepancies in US Sports Shines at NCAA Tournament 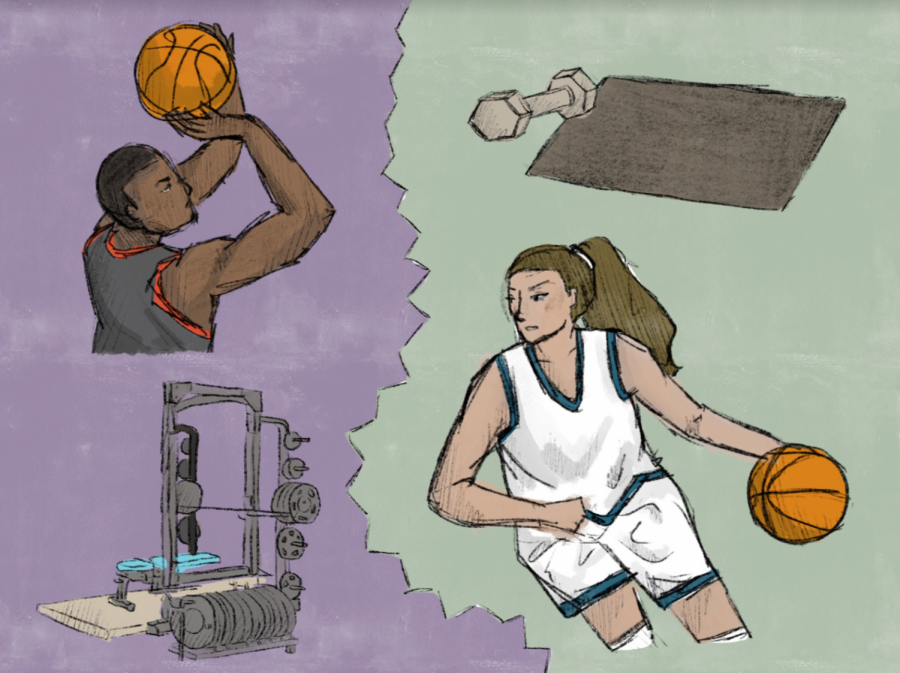 It is apparent that there is an alarming difference in treatment between men’s and women’s sports in the US. There have been many scandals regarding this disparity, including the US Women’s National Soccer Team suing the U.S. Soccer Federation (USSF) over discrimination on the basis of sex. Gender disparity in the National Collegiate Athletic Association (NCAA) has gained a lot of exposure in the context of college basketball recently.

The 2021 NCAA Men’s Basketball tournament—better known as March Madness—began on March 18th. A TikTok created by Sedona Price, a University of Oregon forward in the women’s basketball bubble, showed the drastic differences between the men’s and women’s weight room. While the men had an expansive collection of weights and exercise machines, the women’s weight room was limited to a rack of dumbbells and a pile of yoga mats.

In response to the backlash, the NCAA claimed that this was due to a lack of space in San Antonio, where the Women’s Tournament was taking place; however, that was quickly disproved by a video showing that there was in fact a huge space for the women’s weight room, it just had not been utilized. Dan Gavitt, the NCAA’s senior president of basketball, apologized, saying, “(When) we don’t meet the expectations of that support, that’s on me and for that, I apologize to the women’s basketball student-athletes, to the coaches, to the women’s basketball committee for dropping the ball, frankly, on the weight room issue in San Antonio.”

Issues also arose about the differences between COVID testing protocols at the women’s bubble in Texas compared to those implemented in Indiana—the home of the Men’s Tournament. While the Men’s Tournament used PCR tests, the Women’s Tournament used antigen; PCR tests are widely considered to be the more reliable of the two and the FDA has stated that antigen tests can often yield false positive results. NCAA president Mark Emmert claimed that this difference was due to the provider hired to do the testing. Dan Solomon from the Texas Monthly magazine reported that San Antonio actually has a lab specifically designed to process PCR tests inexpensively and efficiently, so Emmert’s comments have led to  even greater backlash.

Yet another instance of gender disparity came in the “swag bags” given to student-athletes in both the men’s and women’s tournaments. These “swag bags” were filled with merchandise, toiletries, and other items as gifts for having made the tournament. There were massive differences apparent between the items and quantity given in the women’s bag compared to their male counterparts. This prompted Lynn Holzman, the Vice President for women’s basketball at NCAA, to respond by calling the differences ‘minor’ and stating that the differences were due to location.

Even though the NCAA Division 1 basketball tournaments had so many obvious disparities, the differences were only exacerbated in lower divisions. While the Division 2 men played in the Ford center in Evansville Indiana, which seats around 11,000, the women played in an essential ballroom in the Columbus Convention center in Ohio where 36 guest passes were given to each team.

One of the largest arguments for why this gender disparity continues to plague the NCAA is the disparity in revenue that each tournament generates. According to the NCAA, in the 2018-2019 season, the Men’s Tournament generated $917.8 million dollars, while the Women’s Tournament generated a mere $15.1 million dollars. The men’s basketball tournament is also one of the five championships that actually generate a profit for the NCAA and its member schools. The other four are baseball, men’s ice hockey, men’s wrestling, and men’s lacrosse. The NCAA is also a private organization, so Title IX doesn’t apply to the body itself, and they are not legally obligated to uphold gender equality in their tournaments.

Social media played an incredibly key role in exposing what many see as injustices in the NCAA this year. If the topic hadn’t garnered such disbelief and outrage on platforms like Twitter and TikTok, the NCAA might not have even responded or worked towards remedying the disparities. Unfortunately, this attention was mainly on the Division 1 tournament, leaving the inequalities of other divisions and their tournaments in the shadows. Geno Auriemma, the coach of the Connecticut Huskies women’s team, summed the situation up pretty well by saying, “What’s happening at the NCAA level, that’s a small sample of what occurs every single day on every college campus pretty much throughout this country.”