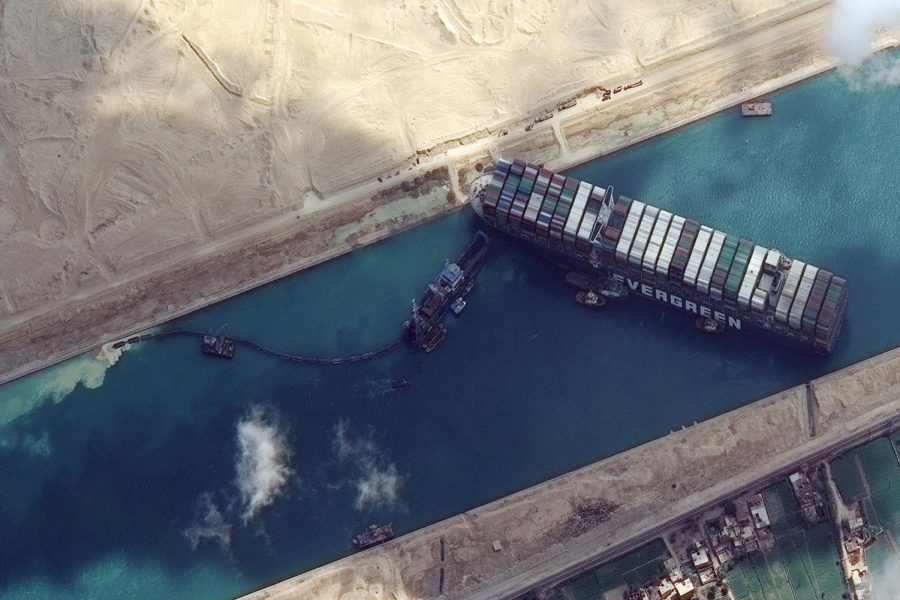 Courtesy of NBC News: The Ever Green ship stuck in the Suez Canal.

The shipping company Evergreen is in deep water after a ship of theirs found itself in water far too shallow. On March 23rd, one of the Taiwanese company’s largest vessels, the Ever Given, attempted to cross the Suez Canal. Due to a sandstorm, strong winds and limited visibility caused the freighter to run aground, blocking passage for nearly a week. The quarter-mile long ship weighs nearly 220,000 tonnes, causing many experts to fear that an excavation process could take months. Fortunately, Egyptian authorities were able to free the vessel within a week, clearing the canal for passage. However, it still took days for the canal to process the backlog of 800 ships waiting to pass through, as nearly 100 ships pass through the canal every day. Currently, Egyptian authorities are refusing to allow the Ever Given to continue on its route until they are compensated with one billion dollars. As of Monday, the Ever Given is anchored in Egypt’s Great Bitter Lake. Maesrk, a Danish shipping company, says that this event will have lasting effects: “Even when the canal gets reopened, the ripple effects on global capacity and equipment are significant and … further disruption could take weeks, possibly months, to unravel.“ This is a sign that maritime shipping might hit some roadblocks in the near future.

Ships are getting too big for canals; the Ever Given is already incapable of passing through the Panama Canal. Vessels have nearly doubled in size in the last decade. This is a cause for concern; if vessels continue to increase in size, then shipping times will increase exponentially because they won’t be able to pass through essential shortcuts. If ships don’t increase in size, then companies won’t be able to keep up with the increasing global demand for produce and goods. Additionally, extreme weather is becoming more common. With the rise of global temperatures, ships may have to wait for storms to pass or go around Africa, adding weeks to trade routes.

Economically, the blockage cost 54 billion dollars. Some estimates suggest that for every minute that the Ever Given was stuck, the shipping industry lost 6.7 million dollars. Fortunately, the blockage was brief, but this has implications for maritime shipping, an industry reliant on shipping routes being available. 12% of all maritime trade passes through the Suez Canal; diverting 12% of trade to pass through the Cape of Good Hope for a week was relatively ineffectual, but this could have been worse. In fact, it has been worse, nearly 50 years ago.

In 1967, during the Six Day War, Egypt blocked off the Suez Canal with debris in an attempt to harm Israel’s economy. Fourteen ships were in the canal at this time, and they would remain there for eight years. The analytics company Kpler maps out the effects the Suez Canal has had on shipping times: “Suez to Amsterdam at 12 knots is just over 13 days via the canal, or 41 days via the Cape [of Good Hope].” If an event similar to that of the 1967 closing ever happens again, delivery times would increase, meaning fuel consumption of these ships would increase. Massive cargo vessels moving at 20 knots can consume up to 63,000 gallons of fuel per day. Needless to say, adding 30 days to a shipping route is expensive, and shipping companies would likely compensate by ramping up prices of their service. Corporations that are using these shipping companies to move their products would likely increase their prices to consumers as well in order to pay for the more expensive service.

The Ever Given’s stay in the Suez Canal was relatively brief, but the shipping industry’s problems are far from over. Ships are getting too big. Massive vessels already have limited options as to which ports can accommodate a ship their size. And despite recent expansions, canals and tight waterways are becoming unviable. Fortunately, world trade can resume on its previous course, and hopefully, the Ever Given’s ill-fated journey is not the start of a larger pattern.