The Brattle Theater: The Theater That Brought Art-House to America 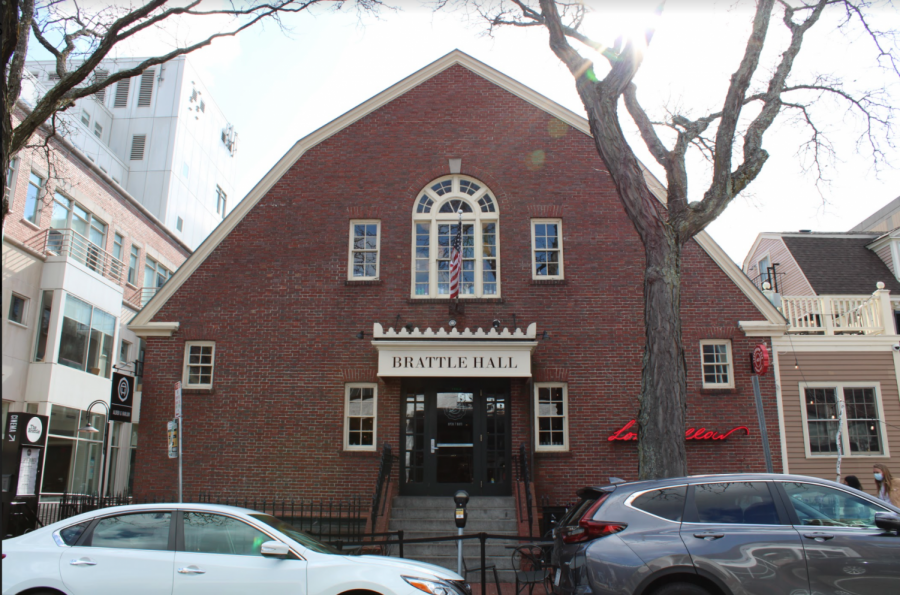 The Brattle Theater, located on Brattle Street in Harvard Square.

The Brattle Theater, located in Cambridge, is a small hidden gem; so small that one would miss it unless they knew where to find it. The theater shares a building in Harvard Square with Cafe Algiers and the restaurant Alden and Harrow, and it can only be accessed by a discrete set of side stairs which lead to a little nook with a concession stand and a single screen for movie showings. And yet, despite its size, “The Brattle” is one of the most influential movie theaters in America.

The Brattle Theater officially opened as a hall for plays and other entertainment in 1890. However, it was not until 1953 that it became the pioneering art-house theater it is known as today. Art house consists of mostly foreign or independent films that are not targeted to a mainstream audience. Recent Harvard graduates Cyrus Harvey and Bryant Halliday bought the Brattle Hall with the hope to show foreign and classic films. American theaters at that time almost exclusively showed American mainstream films, thus the Brattle’s screenings were completely mind-blowing and influential to people, especially American filmmakers. Even with directors like John Cassavettes, who is seen to be deeply American, you can see how the international films like Jean Luc Godard influenced him with their quick cuts and aimless dialogue. Harvey and Halliday wanted to show the innovation that was sparking around the world, bringing light to international films that they felt had the characteristics of a timeless classic. Pioneering art-house films from directors such as Akira Kurosawa, Ingmar Bergman, Federico Fellini, and François Truffaut that were aired at the theater did in fact become classics. The Brattle Theater was very popular and brought people from all around the country to watch Art-House classics.

In order to expand to a greater degree, Harvey and Halliday created Janus Films, a movie distribution company focused on screening art house movies. Although Harvey and Halliday sold Janus Films in 1966, the company upheld its reputation in the art house industry, working closely with the Criterion Collection, a highly regarded collection and distributor of films. During that same year, Halliday sold The Brattle Theater, yet Harvey continued to manage until 1976 when he leased the theater to Sari Abul-Jubain of G&A Associates, Inc. The Brattle Theater continued to be a popular for-profit theater in Cambridge until 2001, when it became a non-profit theater run by the Brattle Film Foundation due to the growing popularity and competition of home video and chain multiplexes. As of 2021, The Brattle Theater continues to run as the only independently-owned theater in Cambridge, and is still showing the same classic art house film, while at the same time showing film festivals and new indie movies.

Out of all businesses, movie theaters experienced especially direct difficulty as a result of the global pandemic. The Brattle showed its last movie on March 13th, 2020. Because The Brattle is a non-profit, they have an advantage over other independent theaters in terms of their financial support. The Brattle remains committed to keeping engagement with their devoted community of supporters by streaming online movies, holding online chats for movie lovers, and even launching a podcast.

Supporters of The Brattle also fundraised to keep up this historic movie theater with hopes that The Brattle Theater can open up again to the public in the near future. Ned Hinkle, the Creative Director at The Brattle spoke about the shutdown saying. “[The] silver linings coming from the pandemic has been a renewed connection with our audience and the feeling that we have a real mandate to continue doing what we do best.”

The Brattle Theater’s hope for the future is to keep doing what they set out to do in 1953, breaking boundaries in the films that are shown, and, according to Hinkle, “[increasing] the diversity of our programs–both in what stories are shown and who is telling them.” Movies have always been a deeply communal activity. Even before the pandemic, the increased use of streaming services meant that many people lost the joy of being in a theater and sharing the experience of being moved. While the pandemic continues to limit the ability to share space communally, as vaccination campaigns expand, people will be able to come out and support their local movie theaters. Go to The Brattle and watch those same movies Harvey and Halliday first showed all those years ago.

If you do want to donate to The Brattle, Ned Hinkle points you to “our website at brattlefilm.org. There you can find out ways to become involved, make a donation, watch one of our online programs, follow our social media accounts, or check out the podcast.”