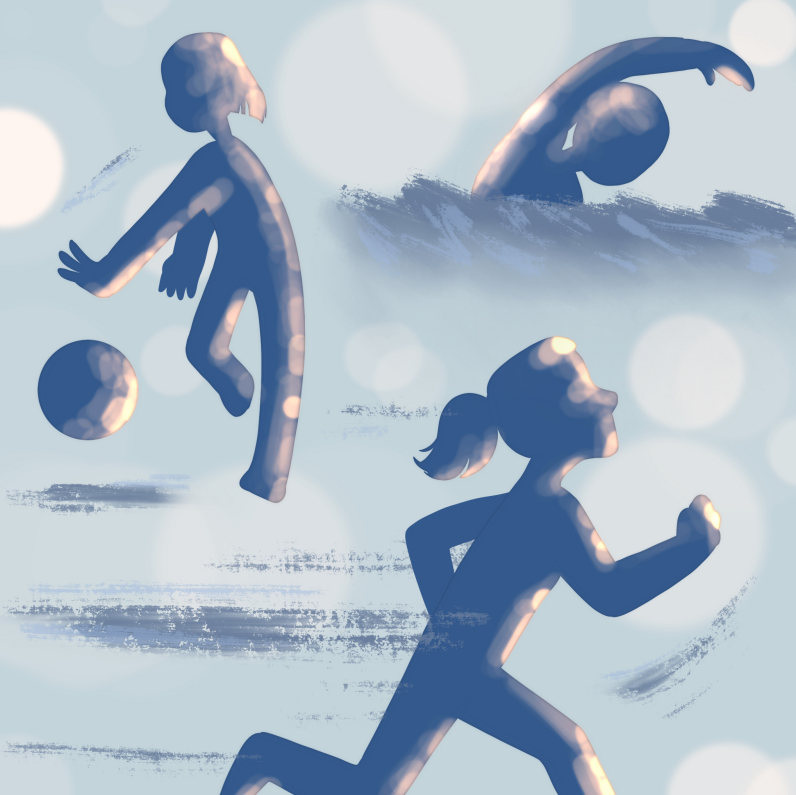 The boys basketball team felt the impact of the COVID-19 regulations early on in the season. Just a few weeks into play they faced a ten day long quarantine after several players tested positive. Yet this didn’t hold them back as they bounced back and ended the regular season with a 3-4  record. Taking their momentum into the Dual County League (DCL) playoffs, they defeated Wayland in a game that came down to the final possession. Their season ended in the second round with a hard-fought game against Weston. The expectations for the future of the team remain high as per usual, and as captain Zavier Dunbar ’21 put it, “The team is looking great with lots of young talent.” Two league all-stars, Aidan Oliver and Cooper Wright, are returning next year as seniors and are looking to take the team on a long playoff run.

After a deep run in the state tournament last year, the girls varsity basketball team was faced with a rebuilding year. The team only had three returning varsity players, so the majority of the players were young and didn’t have much experience. While the team ended up going 1-10, they are a young team that has potential within. Captain Lwam Mahari ’22 believes that “there’s a lot of things that each person brings to the team, and together the future of the team could be a lot better.” Next year the chemistry will only improve, and with only one senior graduating they can be expected to build off of this unusual year.

Both the swimming and diving team participated in one virtual meet during their season against Bedford. While they only had one meet, this didn’t stop them from keeping up the intensity throughout the entire season. Captain Camille Rheault ’22 was happy with the progress they made and felt that even though the season was unusual: “the overall atmosphere was so much more welcoming and exciting.” A large factor of this was likely the strong class of freshmen, which is a good sign for what the future holds. Even though not many individuals made the state championship meet, Camille is hopeful that “with the right training, mindset, and coaches [they] can accomplish that [next year].”

Despite the COVID-19 pandemic preventing the CRLS fencing program from competing against other local high schools this year, the team still managed to take value from the training sessions—both virtual and in-person—that they were afforded. A typical week of training included three in-person practices, where athletes would compete against other members of the CRLS team at a local fencing club, as well as two virtual sessions for conditioning purposes. The team was not supposed to compete during the winter season under the Cambridge School Committee’s initial plan; however, the work of many behind the scenes allowed the fencing team to practice during their season—something that captain Skyler Marks ’22 greatly appreciated. Marks shared with the Register Forum, “I am very, very grateful that we were able to fence and keep our skills up. I think that it has been an incredibly valuable opportunity for many people [and] I know for me it has been a really great resource in terms of connection and seeing people in-person.”

The CRLS Boys Hockey team followed up last year’s historic season with a record of 5-5-1. In a lot of ways this was a bridge year. Several crucial seniors, including career 100-point scorer Thomas McGaffigan ’20, led the team to a North Finals appearance, an impressive feat for the Falcons. Younger players had to step up into the void left by the graduating seniors, providing important experiences. “We lost a lot of talent last year, but we still competed against pretty stiff competition and I think a lot of guys grew because of that,” said captain Chris Gould ’22. Starting in early January, boys hockey played a shortened schedule and competed in a DCL mini-tournament. The Falcons fell to Boston Latin School in the semi-finals of the tournament to conclude the season. Gould is “very excited for next year,” hoping for a return to the MIAA tournament for another deep run.

After a proposal was put forth by Superintendent Kenneth Salim in early December that only authorized the CRLS basketball and swim teams to compete during the winter season, the CRLS girls varsity hockey team was unsure where that left them. For many high school athletes during the pandemic, sports seasons have been a much needed outlet for socialization and physical activity, and canceling seasons have been proven to have detrimental effects. This is why captain Molly Doran ’21 felt lucky to have the opportunity to play this season after a combined effort of student-led activism and flexibility on the part of the Cambridge School Committee. Despite struggling at times throughout the season to compete in the always competitive DCL, the fact that the team could even play was a huge win. Doran commented, “I definitely felt lucky because a bunch of kids I know had their seasons canceled.” While the team finished 0-8 on the season, the team is only losing six seniors and returning most of their varsity athletes, which has given Doran optimism for the future of the program: “The team chemistry from this year is definitely going to transfer over to next year, so I think the team will be stronger because they will know how everyone plays.”