The Model Minority Myth is Racist–Not Just to Asians 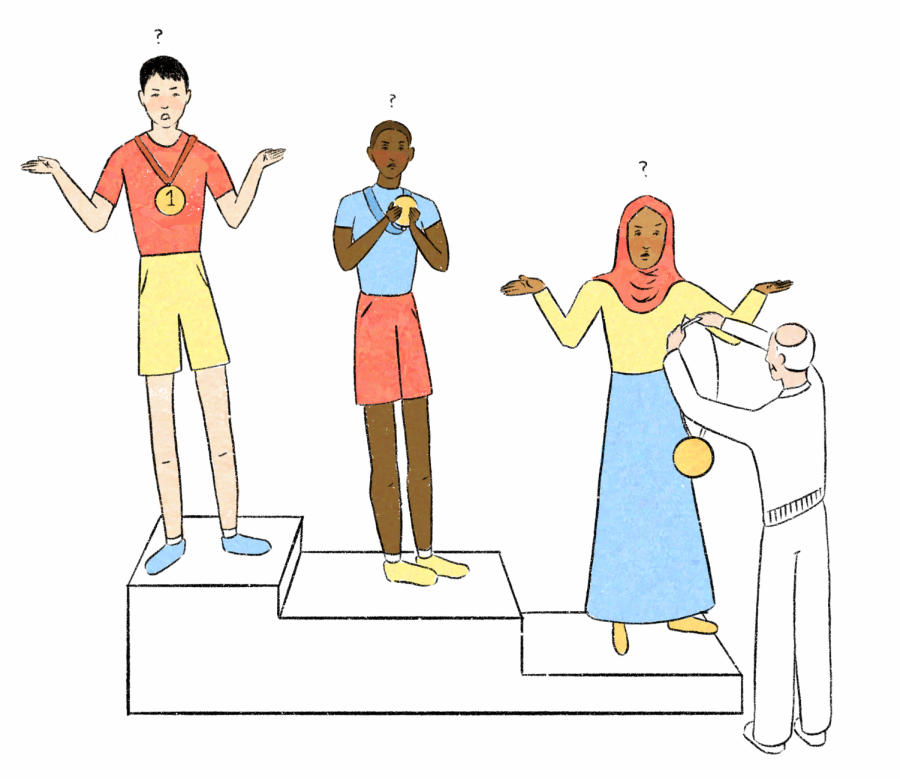 What is the “model minority myth”? To understand this myth in the media, turn to the deeply bigoted article published for NY Magazine in 2017 by Andrew Sullivan: “Asian-Americans are among the most prosperous, well-educated, and successful ethnic groups in America … It couldn’t possibly be that they maintained solid two-parent family structures, had social networks that looked after one another, placed enormous emphasis on education and hard work? … thereby turned false, negative stereotypes into true, positive ones? … It couldn’t be that all whites are not racists or that the American dream still lives?” Sullivan perpetuates here the longstanding “model minority myth,” commonly illustrated in American media and pop-culture; Asians become glorified for their achievements and assimilation. Yet, this myth has widely been used as a means of tearing down other minorities in contrast to Asians, especially Black people.

This comparison is illustrated as far back as 1966 (and likely much earlier than even then); William Petersen, in the New York Times article, Success Story, Japanese-American Style, used this myth to draw unfair, racist comparisons between Asian Americans and Black Americans. Both Sullivan and Petersen thinly veil their anti-Black rhetoric by using this myth. Petersen indicated Asians were proof of the American Dream’s promises, then attacked Black Americans for failing to achieve this dream. Petersen ignores the fact that Black people have suffered systemic racism in America in a way no other American minority has. The specific generalization that Asians possess two-parent families and hard-working attitudes in comparison to Black people implies that Black people are at fault for the disparities they suffer. Disturbingly, research on the shrinking wage gap between whites and Asians indicates that Asian education rates in the last decades weren’t what closed this gap; it was the perpetuation of this myth—hence, less discrimination from whites. Less discrimination led to more opportunities for white-collar jobs, acceptance into academia and the medical fields, and positive media coverage. It was the myth and the convenience of using Asians as a political tool that justified further racism that benefited Asians.

Still, like all invented racial tropes, the model minority myth survives at its creators’ will and can be swept away at any time. This last year’s pandemic illustrates this, during which any privileges Asians possessed from this myth disappeared after suffering blame from the previous administration for the spread of the virus. Undoubtedly, Donald Trump’s countless mentions of the ‘China’ or ‘Wuhan’ virus and his myriad of anti-Asian racist remarks contributed to the nationwide rise of hate crimes against Asians in all but two of the ten biggest American cities—including Boston. In New York City and Los Angeles, anti-Asian hate crimes have even skyrocketed to 150% since the pandemic. Understanding that this superficially ‘positive’ myth is actually a method of oppressing other minorities explains why it so quickly crumbled.

The model minority myth not only falls in and out of favor depending on what’s convenient, but it also isn’t a reliable assessment of privilege. Assuming an entire non-white demographic in the US dodges disparities with above-average education rates is highly dangerous, reductive, and will never be true. Asian Americans are a diverse demographic from over 20 countries, and 19 origin groups from South and East Asia comprise 94% of the Asian population in America. It is impossible to assume that all groups are exceedingly wealthy or educated: Asians in the lowest income brackets fall behind corresponding whites. Asian immigrants in the US only marginally hold more bachelor’s degrees, just 6% higher than those coming to the US from the Middle East, with the gap slightly widening for groups from Africa, Europe, and Canada. Compared to the national average of 30%, 51% of Asians ages 25 and up in America hold bachelor’s degrees; however, the wealthiest Asian immigrants are typically educated before being recruited into the US for jobs, thus receiving work visas and green cards more easily. Asians fleeing instability or poverty don’t experience nearly as easy a transition. Naturalization rates, education levels, and socioeconomic status differ across the board. All Asian demographics in the US are growing, and Asian income inequality increases more quickly than in any other racial group in America. Perhaps some Asians may have an appealing educational background to prompt recruitment, but by no means does this prove the American Dream’s existence, mean Asians are immune from racism, justify making Asians into a monolith, or suggest that other minorities should face more racism in turn.

Examining the fallacies of the model minority myth reveals the darker purposes of every racial stereotype in America. They’re all intentionally inaccurate. Stereotypes enable white people to maintain privilege and confine minorities into a hierarchy, perpetuating the narrative that fighting for societal approval is the only way people of color can attain the safety and opportunities that white tolerance can fleetingly provide. Seeing that Asians are the fastest-growing racial group in the American electorate, and people of color will become the majority of the US population by 2045, it’s time for the model minority myth and all racial stereotypes to be dismantled. Not just for the sake of Asians—but for the sake of all Americans.