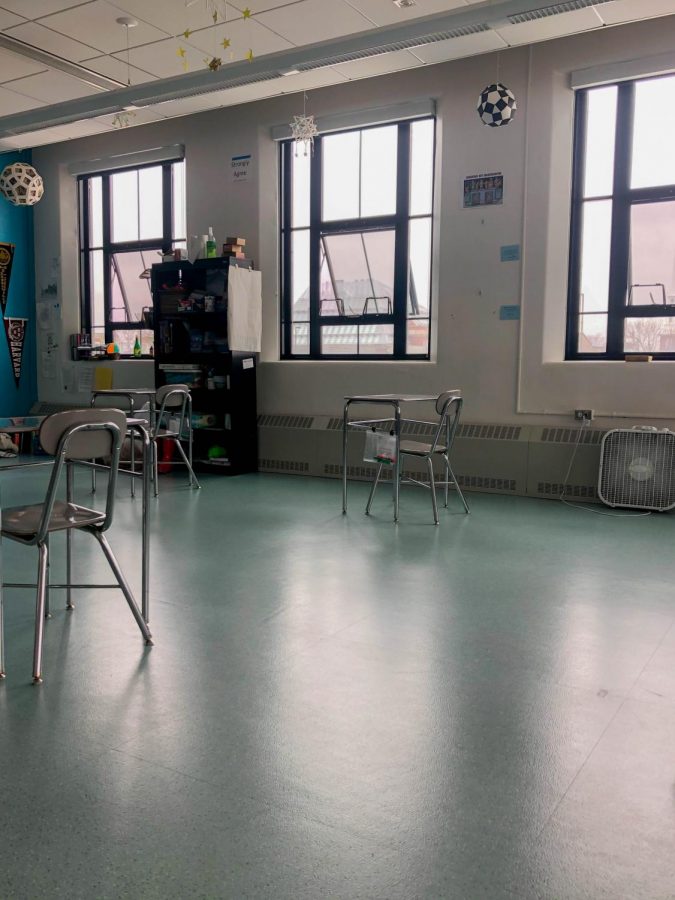 A classroom at CRLS during remote learning.

Remarkable and unfamiliar terrain was experienced this March: for the first time since March 13th, 2020, all Cambridge Public Schools’ students had the option to partake in an in-person learning experience. Since the start of the COVID-19 battle, CRLS students have been unsure as to when they would return in-person, and how. But, March 1st marked the commencement of a possible in-person learning model for students and teachers alike.

Educators, administration, and the School Committee joined forces to develop the in-person system. In February 2021, a survey was sent out to all families, asking one simple question: “Would you like your child to participate in an in-person hybrid learning model starting March 1st?” Below the question, a family could either answer “Yes” or simply put “No.” If families did not fill out the survey, they would automatically be deemed as wanting to remain in their current learning situation, which for most was remote. Around the end of February, it was clear that, of those who responded, 640 students wanted to be in person.

Cambridge Rindge and Latin took a few steps to make sure that the in-person transition was a smooth one. Principal Smith and his team designed a new schedule that would accommodate both an in-person and remote learning model, by having the first two periods in the morning be 80 minutes, which would be the blocks for in-person learners, and having the last two periods, both 50 minutes long, be remote for everyone. The first and second periods on Monday and Tuesday would switch with the third and fourth periods for Thursday and Friday, and if students were in-person, they would leave before lunch (or get a bagged lunch from the cafeteria). The school also set up a cohort system, where only half of those who signed up for in-person would be in-person for one week, and the other half would attend the next week. All teachers and/or students who partake with in-person learning connect with remote students via Zoom; however, many in-person teachers project their presentations, or have the Zoom call on the loudspeakers.

One student of in-person learning is Oscar Benedek, a senior at CRLS who had his first day back at CRLS on March 8th, 2021. As a part of Cohort B, Benedek thought, “It was cool being back in a place that I went to for three years every day.” For many CRLS students, they felt a moment of nostalgia as they walked down the colorful hallways of CRLS, and through the building that was once ever so familiar.

Freshmen, like Christina Korn, had a completely different experience, as most freshmen had never seen the inside of the building with the perspective of being a CRLS student. Korn reflected, “When it gets warmer, I hope we have full days in-person. We could eat our lunches outside and then have all of our classes the same day.” Korn and many other freshmen who chose to be in-person liked being able to socialize with other students that they had never met before.

Korn also mentioned that going back in-person made her more productive, and sophomore Ellie Harmon, who chose to be in-person, agreed. Harmon explained, “Being in the building made my day feel more productive which is something that I was lacking when being all remote.” Isla Mitchell, a junior participating with the in-person model, also thought that, “In-person learning gives me a change in scenery. I feel like I have a lot more energy now that I am going into school, rather than being stuck in my bedroom all day. It is nice to just have that short commute to school on my bike in the morning.”

The majority of CRLS students did not choose to partake in an in-person learning experience, one of those being Tenley Ransom, a senior. Ransom explained, “I do not think that the hybrid learning model negatively affected my learning like some predicted. I like the hybrid model because students who want the socialization and structure that in-person school provides can have that, while others can choose to stay at home.” It is important to note that for teachers who are remote, students like Mitchell have to report to a classroom or the cafeteria to complete their learning virtually. Mitchell thought, “Although it is not as bad as I expected, it is definitely more difficult to focus and participate when there are like 20 other kids around you all in different classes.”

The hybrid learning model marks the start of a transition back to total in-person learning. The model at the moment may not be perfect, but this drastic move has caused Cambridge to begin thinking about more ways to expand in-person learning.