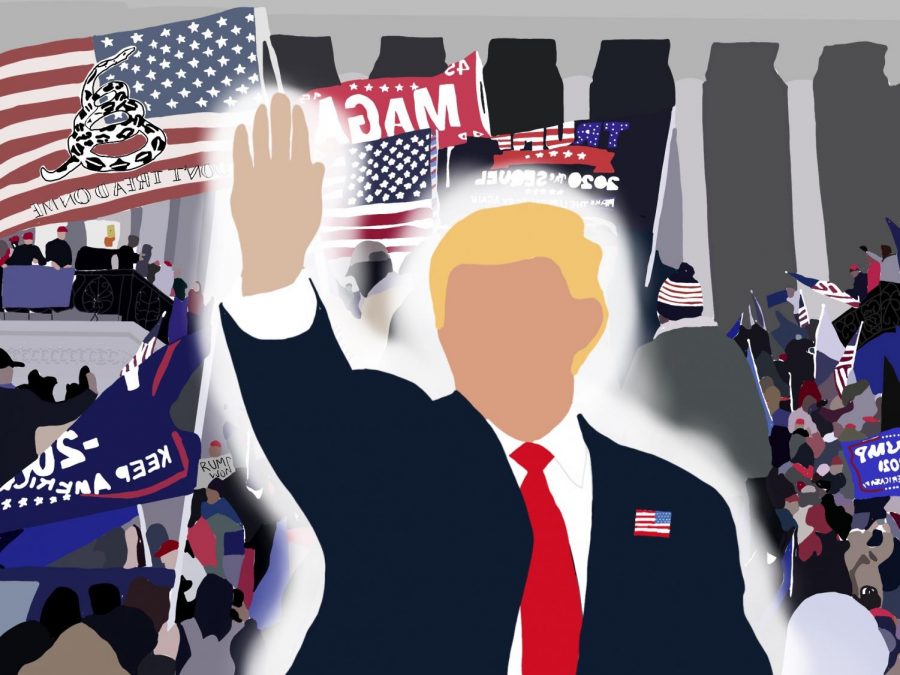 Abolishing the two-party political system has been on the minds and agendas of politicians across parties for a while now; before warring Democrats and Republicans, there were Anti-Federalists and Federalists clashing over the ratification of the Constitution. After more than 200 years, Donald Trump’s win in 2016 highlighted flaws within the US political system that have been pushed aside for far too long, including the detrimental nature of such a harsh political divide between parties. On his way out of the White House, Trump turned to close personnel to consider the idea of starting a brand new political party for crestfallen Trump supporters after the election results in November. His plans to create a “MAGA Party,” which eventually transformed into the more on brand and nationalistic “Patriot Party,” picked up support quickly among his constituents, as well as conservative on-air personalities such as Lou Dobbs of Fox News.

So, is Trump’s new radical right “populist” party the answer to ending the two-party system? In theory, the dismantling of factionalism should serve to lessen political polarization, but Trump’s new alt-right group will only introduce a new level of extremism.

The timing of Trump’s attempt at political reform couldn’t make more sense: as the nation approached a momentous election in late 2020, many were wary to consider the fact that Trump may not be finished with his time in the political spotlight—whether in public office or not. He hasn’t been shy or modest about his plans, declaring in a chilling statement that he would “be back in some form.” This seems to be just another desperate grab for a modicum of power as President Joe Biden and the Democratic “enemy power” take over.

It also comes on the heels of a divisive betrayal for the GOP. Tensions were starting to rise within the party as accusations of election fraud took over the media. At the time, with Trump’s term coming to an end, Republicans weren’t as enthusiastic about their support for his motion to overturn the results. Whatever ties that remained between Trump and his beloved Republican party began to dissolve after the deadly coup at the Capitol in early January. The previously loyal Republican Senate Majority Leader Mitch McConnell faced Trump’s wrath after refusing to back Trump’s claim of a fraudulent election. The sellout by Trump’s Republican allies manifested as Capitol rioters yelled to “hang Mike Pence” at the Capitol insurrection later on. It should be noted that this came only after Trump claimed Pence betrayed him for not overturning the election results, which Trump falsely claimed he had the power to do. As Trump’s agenda and rhetoric during his time in office continued to get more extreme, more moderate Republicans were already dissociating from their own party. Now, after being voted out of office in a humiliating display of democracy, Trump and his supporters are wanting to distance themselves as well. After Democrats took control of not only the presidential office, but also the Senate, and were able to keep control of the House of Representatives, the upcoming midterm elections in 2022 are crucial, but with the GOP splintering the way it is, both its reign and existence are in question.

This isn’t the first time the introduction of a third party has caused issues for the GOP. While it was one of the only examples of any sort of success for a third party, Teddy Roosevelt’s “Bull Moose Party” in 1912 split the votes with Republican William Taft, leading to a Democratic victory. It’s no question that any additional party could divide both conservative and liberal power, but in truth, the introduction of a two-party system in and of itself threw a wrench in the American electoral system. The government created by the founding fathers was never meant to support a two-party system, nevermind one as polarized as what we see today. John Adams foresaw it as the “greatest political evil,” and Alexander Hamilton viewed it as the “most fatal disease” for the nation. But after an administration that brought the durability of the American electoral system into question, a party centered around Trump may not be the solution the country needs.

In his four years in office, the US has seen many of Trump’s promises, such as his infamous Southern border wall, fall through without fulfillment. Most are hopeful that the Patriot Party will face the same fate, and it seems very possible. Recently, Trump’s campaign team has begun to alienate itself from its own leader, but regardless, the Patriot Party lives. It exists almost exclusively within Trump’s support base, but also has an unsurprising online presence. Even after Trump’s Twitter ban, conservative Facebook pages and QAnon boards remain active and full of determined Patriot Party supporters. While it’s not likely a group of online fanatics will take office, their mere existence proves that Trump’s role in the downfall of the United States is not yet over.

The fall of the GOP is undoubtedly good news for Democrats, who have been waiting for an opportunity to regain power, but now, it also seems to be good news for Trump. His efforts to bring in a new political force shouldn’t be mistaken for an attempted reform of a broken system—instead, this is Trump’s petty revenge for the Republican’s betrayal. Rather than unifying more moderate populations, a Patriot Party would legitimize the political beliefs of those that are too extreme for the representation we have now. The two-party system should be addressed and needs to be fixed, just not by the same man that destroyed it.