The One Hit Wonder of TV: “Freaks and Geeks” 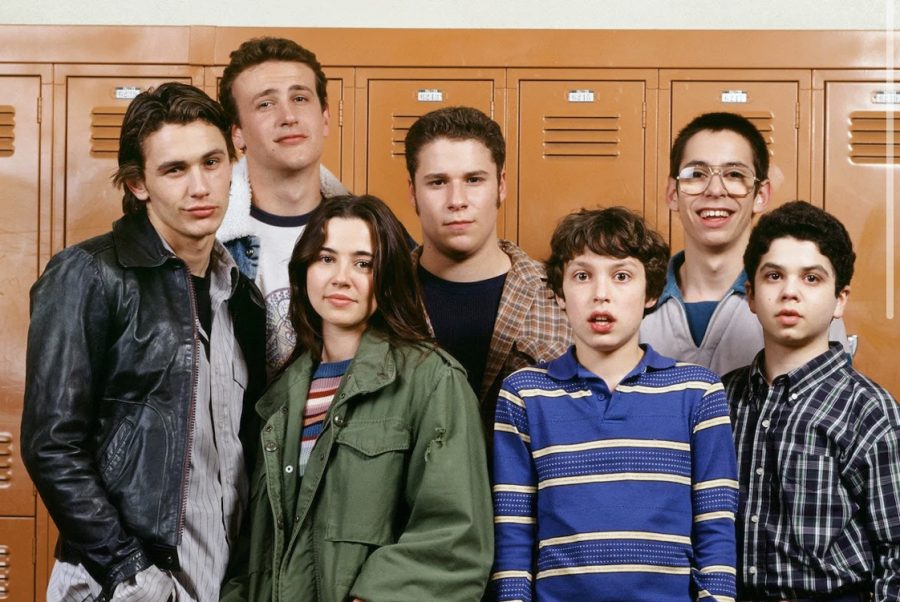 Courtesy of Esquire: The "Freaks and Geeks" cast poses for a photo.

On January 25th, 2021, the acclaimed TV series Freaks and Geeks became available on Hulu. Set in an American high school in the 1980s, the show premiered its first and only season in 1999, and was canceled in 2000, due to irreconcilable differences between the network it was aired on, NBC, and the show’s creators, Judd Apatow and Paul Feig. Concerns were mainly vocalized by the former president of NBC, Garth Ancier, who developed a strange animosity with Apatow and Feig during the show’s run. A second season was never run for many reasons: a poor timeslot, initially low ratings, lousy advertising, a refusal to work with the creative differences of the network, and an expensive soundtrack. NBC wanted the show to have more character victories, which the creators argued was not in the nature of the show; they refused to alter the plot to appease those who did not understand the show’s intended purpose of depicting an imperfect, sometimes illogical, yet honest teenage experience. A great deal of the show’s iconic nature comes from its original, classic rock soundtrack, featuring famous musicians such as Billy Joel, The Who, The Grateful Dead, Van Halen, and others. The same songs that make the show iconic were also a source of its downfall: Feig demanded that the show feature only the original songs, which came with expensive, complicated legal processes surrounding music rights. Despite all obstacles, the show gained popularity from small followings, despite poor ratings, and remains to be a beloved masterpiece.

The show follows a group of “freaks” and a group of “geeks” navigating high school and adolescence in an environment where neither are accepted. The main character, Lindsey (Linda Cardellini), is an ex-mathlete who finds a new friend group of burnouts, who are seen as lazy, poor students with their heads in the clouds. Throughout the series, Lindsey has to make decisions about how to best juggle her parents’ expectations and the importance of her academic future with her new friends. She is among the top 1% of students in her state and a successful mathlete, but she hates being consumed by schoolwork; instead, she yearns for the excitement, spontaneity, and rock and roll provided by her new group of friends. The “freaks” are all complex and multifaceted individuals, despite the fact that they are grouped into the same category. Nick, played by Jason Segel, is the son of a wealthy veteran who has the rebellious dream of becoming a professional drummer. Through his various disastrous romantic relationships and musical failures, the vulnerable, insecure reality of an outwardly “cool” guy is revealed. Kim, played by Busy Phillips, is first portrayed to be a callous, unlikeable bully, but as the show progresses, different aspects of Kim’s life are revealed, such as her unstable home environment and her problems with academic jealousy.

An alluring component of the show is its general aesthetic. The camerawork, set design and, of course, the music, are all thoughtfully chosen. The effort put into each scene demonstrates the care that the show’s creators had for every last detail of production. To complement the show’s pleasant aesthetic is a well-written and intriguing storyline.

Unlike the majority of other TV shows, Freaks and Geeks does not progress in a strict, linear fashion. Instead, while each episode has the same setting, they present a different dilemma or character focus; some serious, others more comedic. For example, one episode depicts the group of “geeks” discovering a pornographic movie together. Another episode focuses on Neal (Samm Levine), one of the geeks, and his complicated perception of traditional family structures, specifically his relationship with his father. The final episode features Daniel (James Franco), a burnout, joining the geeks in a game of Dungeons and Dragons; a display of two conventionally opposite personalities developing an authentic companionship.

The diversity of topics in each episode allows each character’s individuality to be revealed. Each character is very different, but they connect to each other on deep levels through their own sensitivities. Because the characters in Freaks and Geeks are so raw, every rare connection seems more real.

TV shows and movies often present a progression of events that result in a predictable resolution: a problem (either external or a character flaw) causes damage of some sort and then is fixed and a lesson is learned. Instead of following this formula, Freaks and Geeks presents issues that may never get solved. Characters have flaws that do not just disappear in a day. Sometimes, a character won’t do the right thing, and they won’t face any consequences because of it. In real life, people get away with immoral actions all the time. Many people may live their whole life without addressing or understanding their deep, troubled characteristics. Because of this nature, many people have criticized the show’s inability to highlight satisfyingly permanent, positive outcomes. If the show is interpreted as a depiction of traditional cinematic wins and losses, not as a work of art, this criticism is legitimate. But the show doesn’t have those conventional goals, therefore should not be held to conventional standards.

The purpose of Freaks and Geeks is not to teach viewers a lesson about doing the right thing. Instead, it is an honest, funny, and realistic depiction of common experiences that kids in high school may go through. Throughout the show, it is impossible not to develop admiration for each characters’ quirks and qualities. If you haven’t already, watching Freaks and Geeks is an absolute must.