The Events That Shaped 2020 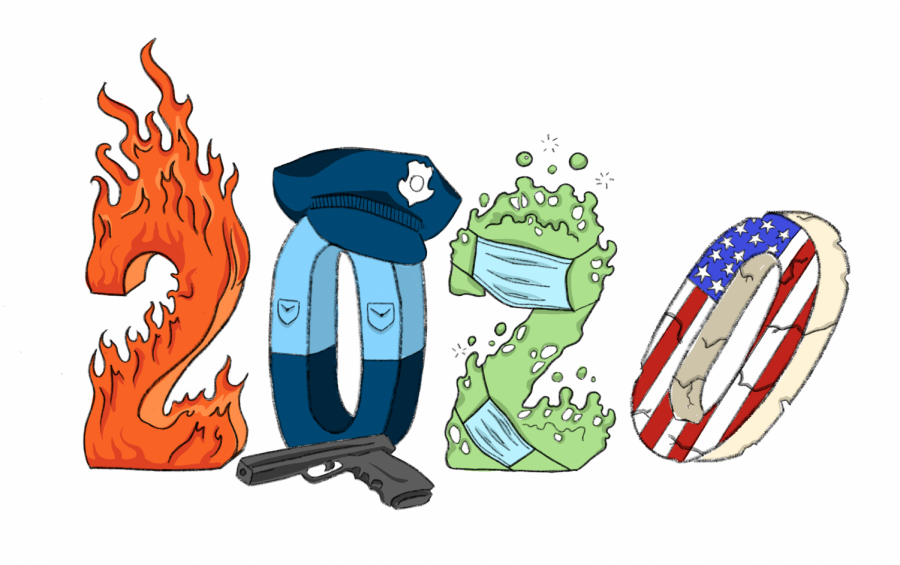 2020 is a year that has been characterized by bad events. Since we’ve almost gotten past this disastrous year, let’s look back at some of the more notable events.

The Fires: In Australia, the 2020 bushfire season, which began in June of last year and ended in May of this year, ravaged the country’s forests. Grimly named the “Black Summer,” an estimated 18.6 million hectares of land were affected by the fires. In New South Wales alone, around 800 million animals were killed by bushfires. The fires have cost the Australian government over $100 billion dollars in damages. In California, the wildfire season of 2020 also caused massive amounts of destruction. Many millions of acres of land were burned, making this season the most destructive in California’s history. These fires are a grim sign of the path the world is taking down the road of climate change.

COVID-19: The coronavirus is most likely what a majority of us will remember about this year. Signs of the pandemic became globally known at the very beginning of this year. The first case in the US was reported on the 20th of January. Many countries began emplacing quarantine orders to their citizens, shutting down businesses and schools. Currently around 1.5 million people have died of COVID worldwide, with over 280,000 of those deaths coming from the United States alone. Vaccines developed by multiple companies are expected to gain approval by the end of this year or in the beginning of the next. The pandemic has had massive negative effects on economies, mental health, education, and nearly every facet of life. COVID-19 has shown us how unprepared we were for a pandemic of this scale; hopefully in the future, the US will learn from our mistakes and never have to face something like this again.

Police Brutality: George Floyd was killed on May 25th, 2020 by then-police officer Derek Chauvin over an encounter caused by an allegedly counterfeit $20 bill. Floyd was killed after Officer Chauvin held Floyd down with his knee on Floyd’s neck for over eight minutes. The next day, the mayor of Minneapolis announced that Chauvin and three other officers who were at the scene had been fired. Around America, and the world, protests began to erupt at the injustice of the entire situation, police brutality, and the general systematic racism that is ever-present in the US. After multiple days of protests, both peaceful and violent across the US, all three officers who accompanied Chauvin were charged with aiding in the death of George Floyd. Chauvin’s charges were also increased after information regarding his involvement in previous violent arrests came to light. Currently, Chauvin is out of jail after he posted a one million dollar bond. He will reappear in court in March of 2021. The tragic death of George Floyd, along with many others, including Breonna Taylor who was killed in March, ignited mass protests and activism. These demonstrations call for much-needed substantial social change throughout America.

The 2020 Elections: On November 3rd, the election that would decide the 46th president of the United States began. On the Democratic side was former Vice President Joe Biden and running mate Senator Kamala Harris. Republican incumbent President Donald Trump defended his office along with his Vice President Mike Pence. The coronavirus had many effects on this election, one of which was the prevalence of mail-in ballots. By the end of the night on November 3rd, a winner was not clear; millions of votes had not yet been counted, and many states were still too close to call. After many long days and nights that were filled with the tense unease of the momentous election, on November 7th at around 11:30 AM, the Associated Press and many other major news sources declared Joseph R. Biden the winner of the 2020 presidential election. President-elect Biden won 306 electoral votes, ousting Trump, who won 232. After the election was called, President Trump refused to concede the presidency and has tried to act on false claims of voter fraud. Official recounts are still happening but it appears that the results will remain. This election was historically significant in many ways with Kamala Harris becoming the first African American, Asian American, and woman to become vice president. The winning party also received over 81 million votes, the most ever in history, beating President Obama’s previous record of 69.5 million votes.

A Year of Tragic Deaths: In 2020 we unfortunately saw the passing of many incredible people. On January 26th, a helicopter carrying nine people, including Kobe Bryant and his daughter, Gianna Bryant, crashed. Sadly all passengers aboard the helicopter passed away, and the following hours, days, and weeks were filled with mourning around the sports industry and the world. On July 17th, John Lewis died after his battle with stage four pancreatic cancer. Lewis played a major role in the civil rights movements alongside Martin Luther King Jr. and other influential figures of the time. On the 29th of August, Chadwick Boseman died from complications related to his colon cancer, the details of which he had kept under wraps for years. The death shook the world of film as millions honored his wonderful legacy. On September 18th, Ruth Bader Ginsburg died from complications of pancreatic cancer. Ruth Bader Ginsburg served as an associate chief justice of the United States Supreme Court for seventeen years. She was the second female and the first Jewish woman to serve on the Supreme Court. On November 25th, Diego Maradona passed away from cardiac arrest. Maradona won the World Cup as captain of the Argentinian soccer team and was awarded the Golden Ball as the best in the tournament.

This year over 1.5 million people lost their lives due to COVID-19. These deaths have affected the entire world, and none of them should be forgotten. Hopefully the world as a whole will be able to move forward into a future where such tragedies never happen again.