The Electoral College Is Racist and Undemocratic; It’s Time for Reform 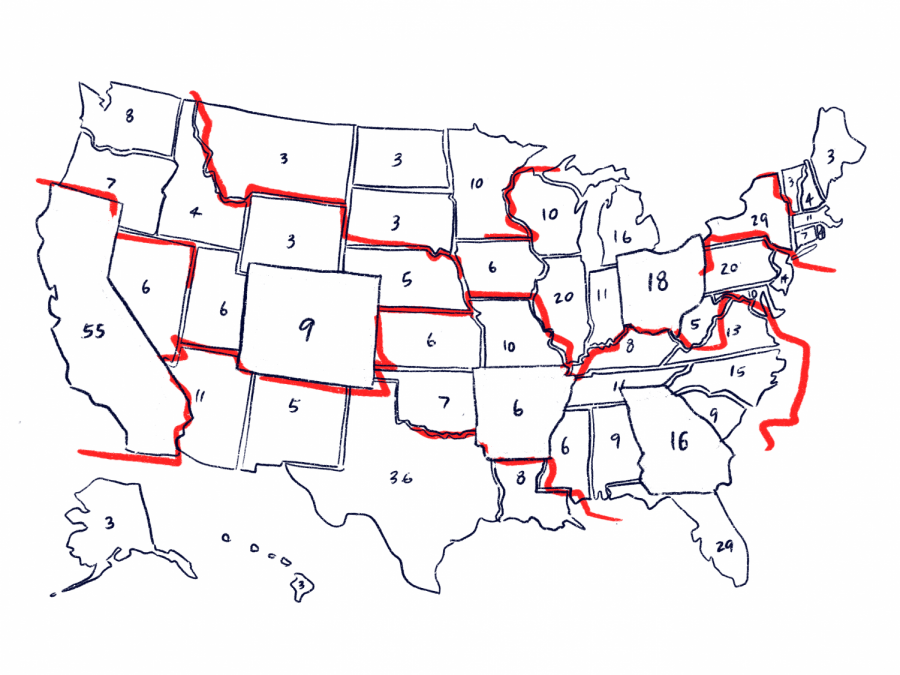 In 1804, the Founding Fathers ratified the 12th Amendment, creating the electoral college in America. This system is an antiquated and illogical middle step that ought to have been replaced by now. However, on multiple occasions, attempts at reforming the voting system were blocked by Southern senators. The most recent congressional effort to strike down the electoral college, in 1969, was a bipartisan move agreed upon by many. James Allen, an Alabama senator at the time, objected, stating, “The electoral college is one of the South’s few remaining political safeguards. Let’s keep it.”

The South understood from the beginning that the North had a larger voter base and would, therefore, always win the popular vote. For Southern states to agree to ratify the Constitution and become united with the other colonies, the Founding Fathers drafted the three-fifths clause. This clause was a compromise that required that an enslaved person, who did not have the right to vote, would count as three-fifths of a person when issuing electoral college votes to states, which are issued relative to each state’s population. In 1787, the South’s population was over 40% enslaved people. While the electoral votes would correlate with who won the popular vote in theory, this over-representation of votes has led to exceptions. In the last twenty year alone, two presidents have won the presidency without the majority of votes: George W. Bush and Donald Trump.

In 1870, when Black people got the right to vote, the South was at risk of losing their surplus of electoral votes. To remain conservative, Southern legislators adopted numerous voter suppression methods early on. The tactics included literacy tests, poll taxes, and threatening violence in the early 1900s, eventually shifting to gerrymandering, and reduced voting locations and hours in the later years of the 20th century. To this day, there is an over-representation of conservatives in government compared to their smaller overall population, partly due to the legacy of the three-fifths clause. Conservatives also benefit from electoral votes from less populated western states that automatically get at least three electoral votes. By default, states get one electoral vote for each senator and one electoral vote for each state representative in Congress, resulting in states with low populations receiving an overly generous amount of votes compared to their population.

In reality, the electoral college was never intended to be genuinely democratic. Its creation has disproportionately benefited both conservative states in the South and states with minuscule populations. While the electoral college only directly affects the presidency, voter suppression has encouraged over-representation in all government branches. According to The Pew Research Center, the South has the largest black voter population, a group that has been a consistently progressive voter base. Nonetheless, that progressiveness is not reflected in the state’s election results. Candidates for Senate, Congress, state-court judges, state laws, and sometimes state leaders all appear on the ballot, increasing incentives by Republicans to make voting difficult. By silencing the voices of minority voters and utilizing the winner-take-all electoral system to their advantage, Southern state leaders delegitimize their local governments, morals, and integrity.

The electoral college’s end is long overdue, but how can it be fixed in a bipartisan way if ending it favors progressives? One promising solution is The National Popular Vote Interstate Compact which individual states have joined (including Massachusetts) to address this challenging problem. The critical difference between this Compact and other solutions is that it circumvents removing the electoral college federally. The Compact members agree to delegate all of their electoral votes to the winner of the nationwide popular vote. Currently, 15 states have adopted the Compact, 196 of the 270 electoral votes needed to determine the election. Once the remaining 74 electoral votes get pledged, the Compact will take effect. It’s not decided when enough pending states will enter, but judging by the return of the “blue wall” in this most recent election, it’s hopeful that key states will adopt it.

Real democracy in America is simply following the definition of one. A government where candidates without the popular vote always lose. A place where there are no disparities in the influence of a vote, regardless of where someone lives, and no incentives to silence minority groups. The electoral college’s abolishment may also motivate citizens from both sides to participate in elections if they know their vote was valued equally. Voter suppression might always exist to an extent, but without the electoral college, it would have to occur on a much larger scale to seize an election. The electoral college is coming to its end, and the Interstate Compact can deliver the final blow.