Boston Businesses Board Up in Anticipation of Post-Election Unrest 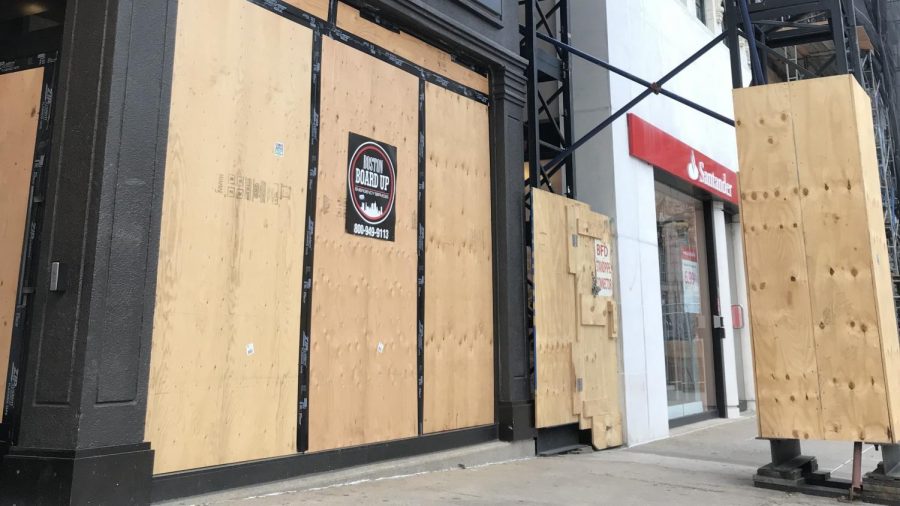 Over the summer there was a lot of damage and rioting from the Black Lives Matter movement protests, counter-protests, and police retaliations. People were recently filled with fear of a repeat of this unrest. The 2020 election has had an effect on every person’s life. It made individuals feel unsafe and threatened that the things they have worked hard to build could be slipping away. This issue has made building owners very uncomfortable and feel the need to board up the front of their buildings. The plywood boards are there to protect the windows from being broken by potential rioters.

This is the second time in just this year a lot of stores have had to be boarded up. Christopher Bonanos, an editor at the New York magazine, in an interview with Curbed talked about “fearing a return of the mass protests and looting from this past summer.” Unrest can unsettle societies for an extended period after events. In a lot of places, including New York City, the police were already standing by with the expectation of violence and uproar in the streets.

People who run stores and restaurants have very different opinions about what should have been done. Covering shop windows has a direct effect on the lives of the shop owners. “We have since requested the boards be removed from Tatte as this was not our decision nor how we wish to have our cafes,” says Jennifer Salmone, manager of Charlestown Tatte bakery. Having boarded windows up scares away potential customers. The boards are unwelcoming and make people want to turn away.

Stores and restaurants have had to do more than just put up the plywood on their windows. Naomi Zhan, a sign designer, talks about what she did. “I put lettering on Zara’s barricade on Newbury Street, quite a few stores on that street were barricaded in fear of riots breaking after the election.” Newbury Street is one of the largest shopping streets in downtown Boston, and during normal times it can be seen full of tourists popping into all the shops. With all the windows closed, shop owners are being forced to create elaborate signs in order to attract customers.

No one expected to have the counting of election results to go on for as long as it did. Store owners were worried about the potential unrest following the release of the election results. Chauncey Alcorn, a business and retail writer from CNN stated, “Some major companies that increased security measures in case there was post-Election Day violence are grappling with the prospect of staying boarded up far longer than planned as the presidential vote count drags on.” The extended time with the windows covered caused a real problem for shops and restaurants.  A lot of these stores have so much to lose with just one broken window. Places like Tiffany’s or Macy’s could have invested thousands of dollars just in their window display. In the end, there was almost no rioting, which, although efforts were wasted, was a relief to a majority of Americans.