Apple Rosette Recipe for the Winter 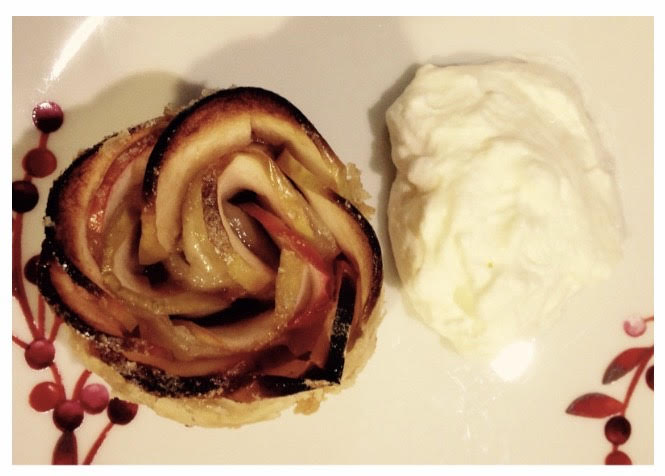 The first time I made this recipe, I was with my French grandmother. Just as I was about to add in a pinch of cinnamon, she swatted my hand away from the bowl and clouded the air with the brown dust. “Qu’est-ce que tu fais?” she asked me incredulously. What are you doing? The French always joke that Americans will put cinnamon on anything and everything. Whether you like cinnamon or not, I ask you to experiment by making some rosettes with cinnamon and some without, and see which one you like better. Happy baking!

Preheat the oven to 400°F and butter 4 ramekins or big muffin tins and sprinkle with sugar. Thinly slice the apples and place on a microwaveable plate. Microwave on high for about 45 seconds until the slices become soft. Cover the plate with a towel and set them aside. If using cinnamon, mix it into the sugar. Roll out the puff pastry into a ⅛” thin square. Cut this into 3” by 12” squares. Spread the melted butter over the puff pastry squares and sprinkle over a generous amount of sugar (or cinnamon sugar). Place apple slices over the long end of the dough leaving about ¼” of space along the bottom. Fold the bottom of the dough over the apple slices. There should be dough along the bottom of the apple slices while the rounds of the apples slices face the top. Mix the eggs and the water together to make an egg wash. Brush this over the strips and sprinkle with more sugar. Starting from one end, roll the dough to create a rosette and seal it together with a little more dough. Transfer the rosettes to the ramekins or muffin tins and cook in the preheated oven for about 45 minutes, or until they are well browned. Once cooled, dust on confectioners sugar and serve.