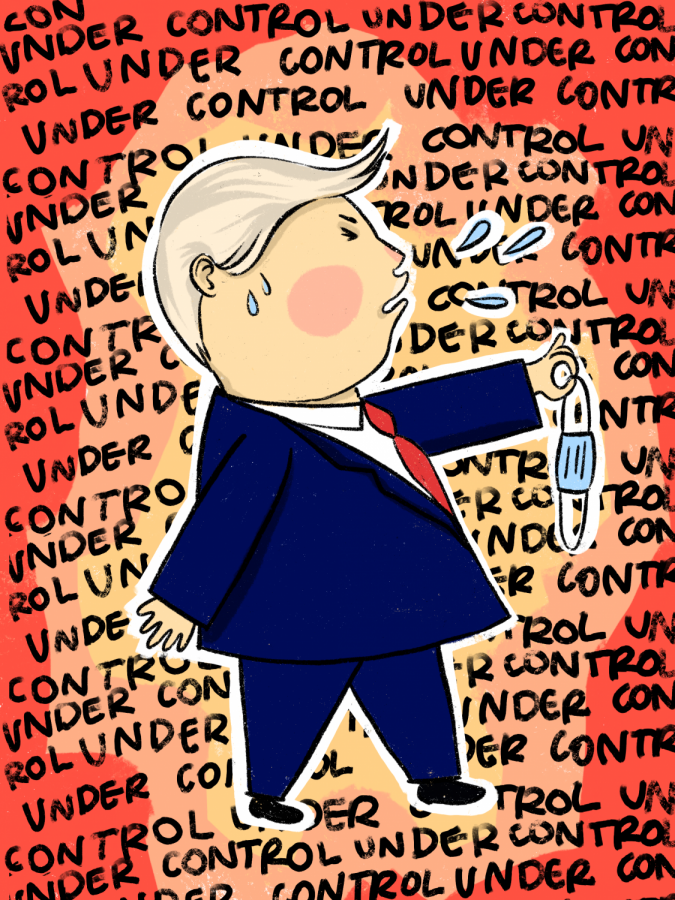 After months of belittling the severity of COVID-19, spending minimal time wearing a mask or practicing social distancing, and claiming that “the end of the pandemic is in sight,” President Trump revealed on October 2nd that he and his wife Melania Trump tested positive for the coronavirus.Mr. Trump announced in a Tweet that day, “We will begin our quarantine and recovery process immediately.” About half an hour later, Melania Trump published her own Tweet stating that they were both “feeling good.”

The two went into quarantine at the White House, resulting in Mr. Trump having to temporarily withdraw from active participation in his presidential campaign, only about a month before election day on November 3. Depending on the severity of Trump’s case, his diagnosis could have had a serious impact on his ability to run his campaign, not only due to depleting health—considering his elderly age and medically-obese weight—but also lost time. This could have even affected his place on the ballot. However, according to the White House, Mr. Trump’s case of COVID-19 was not severe enough to make a great impact on his normal life. White House physician Dr. Sean P. Conley released a statement claiming that “the president and the first lady are both well at this time … Rest assured I expect the president to continue carrying out his duties without disruption while recovering, and I will keep you updated on any future developments.” Despite these claims, many of President Trump’s plans were canceled following his diagnosis, including campaign rallies in Florida, Wisconsin, and Arizona.

The president and first lady tested positive shortly after Mr. Trump’s advisor Hope Hicks tested positive. It is unclear how far the virus has spread among other White House officials, especially due to their general lack of mask-wearing. Mr. Trump’s own diagnosis sparked a myriad of reactions from the public, mainly because of his constant refusal to wear a mask and encourage the public to wear one, as well as trust the effectiveness of masks. He also doubted scientists’ advice and repeatedly claimed that the virus was “going to disappear,” even mocking Democratic presidential candidate Joe Biden for wearing a mask. “I don’t wear masks like him,” the president said disdainfully about Biden, “Every time you see him, he’s got a mask.” Mr. Trump also repeatedly ignored public health and safety guidelines by holding crowded campaign events, which often consisted of hundreds or thousands of people within close proximity of one another and  not wearing masks. Recently, the Trumps’ fourteen-year-old son Barron also tested positive for COVID-19 after an initial negative diagnosis, reportedly having shown no symptoms. He has since tested negative and appears to be in stable condition as of now.

Upon returning to his normal work life after recovery, President Trump made a spectacle of taking off his mask and told the public not to “let [the virus] dominate your life,” even when his wife Melania appeared to be taking the coronavirus more seriously by acknowledging its severity and effects through a statement titled “My Personal Experience With COVID-19.”

“I went through it, now they say I’m immune, [and] I feel so powerful,” Mr. Trump said to the audience of an outdoor rally in Florida. He boasted his better health condition, saying he could “walk in there [and] kiss everyone in that audience. I’ll kiss the guys and the beautiful women and everybody.”

As of now, President Trump, First Lady Melania Trump, and their son Barron appear to be in stable condition. However, with worldwide cases taking a surge in recent days and more chaos ensuing, no one knows what surprises COVID-19 may bring next, so the unexpected should always be anticipated.