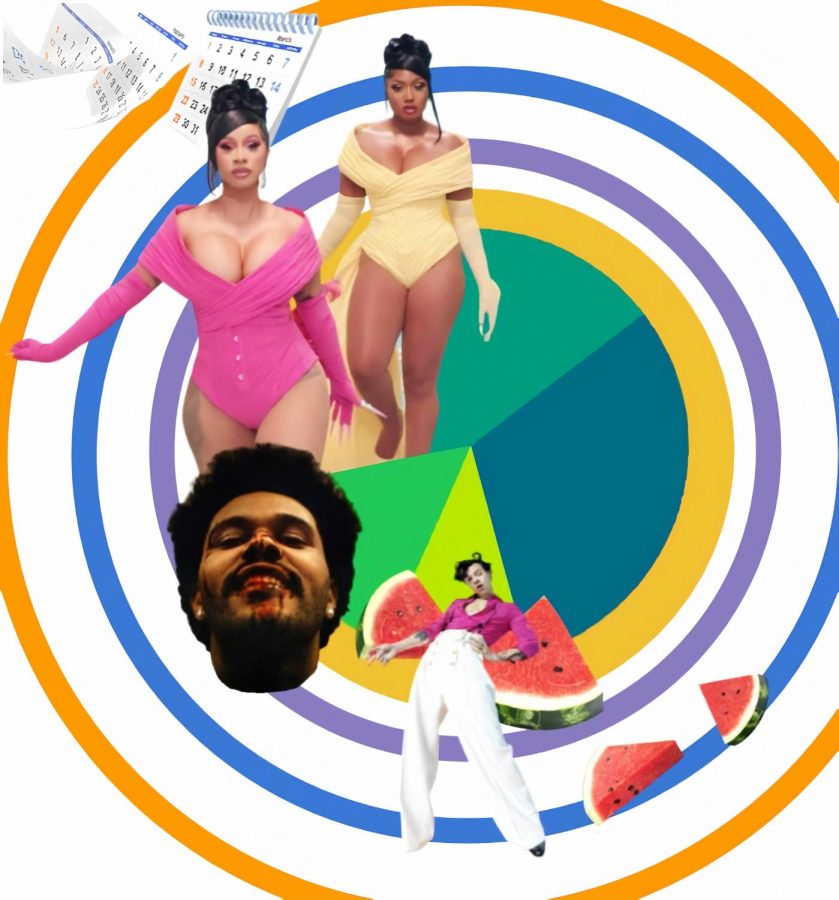 Once you hear it, it never leaves your head. It becomes the trademark of the summer, the anthem that enters every aspect of the season, from parties to sports games and beyond. However, how does one crown a winner in a world where all these social events are canceled or minimized to just the “absolutely necessary”? The CRLS official 2020 song of the summer has yet to earn its status, and throughout this strange and powerful summer of emotional and political upheaval, there simply has not been a tune at the level of ubiquity (Despacito and Old Town Road levels) we are used to. Despite these limitations, Harry Styles, The Weeknd, and Cardi B have laid their hands on an informal title; here are CRLS’ top three songs of the summer, elected by the students.

In third place, with 10.8% of the vote, CRLS students have voted for “Watermelon Sugar” by Harry Styles. Included as the second track of Fine Line, Styles’ most recent album, it was inspired by the American novel In Watermelon Sugar (1968) by Richard Brautigan. “Watermelon Sugar” is a horn and guitar-driven rock, funk-pop, and indie pop song. The song was well-received by music critics, who praised Styles’ vocals. The single also performed well commercially, peaking within the top ten in more than 20 countries, including the United Kingdom, Australia, Canada, and the United States, where it became Styles’ first number one single on the Billboard Hot 100 chart . Despite this unique feat, “Watermelon Sugar” failed to remain at the top, reaching it only once during the week of August 15.

In second place, the Weeknd’s“Blinding Lights” makes it onto the podium, yielding 15.3% of the CRLS vote despite its release by the Canadian singer last November, as the second single in his album After Hours. “Blinding Lights” peaked at number one in 34 countries, including the United States and Canada, where it became The Weeknd’s fifth number one single on the Billboard Hot 100 and the Canadian Hot 100 for four and seven weeks, respectively. It also became his first number one single in Germany, the United Kingdom, and Australia, thus making it his most successful single worldwide to date. In a Billboard interview, The Weeknd expressed his appreciation for music of the 1980s: “I’ve always had an admiration for the era before I was born. You can hear it as far back as my first mixtape that the ’80s—Siouxsie and the Banshees, Cocteau Twins—play such a huge role in my sound. Sometimes it helps me create a new sound and sometimes it’s just obvious. I’m just glad the world’s into it now.” “Blinding Lights” received widespread critical acclaim. It was named the best song of 2020 so far by Billboard and Consequence of Sound. Moreover, “Blinding Lights” won the Best Video and R&B Song of the Year in the MTV Video Music Awards.

Finally, arriving in first place, recognized as the song of the summer by 42.7% of respondents, is Cardi B and Megan Thee Stallion’s collaboration in “WAP.” Upon release, “WAP” received widespread acclaim from music critics, who praised its sex-positive message, though some conservative commentators criticized its sexually explicit nature. It debuted at number one on the Billboard Hot 100, giving Cardi B her fourth number-one single in the US, extending her record as the female rapper with the most number one singles in Hot 100 history. The song broke the record for the largest opening streaming week for a song in US history. Cardi B became the only female rapper to achieve Hot 100 number-one singles in two different decades (2010s and 2020s). It has spent four weeks atop the chart. The single also reached number one in Australia, Canada, Greece, Ireland, Lithuania, New Zealand, and the United Kingdom. Garnering over 26 million views in its first day, “WAP” broke the record for the biggest 24-hour debut for an all-female collaboration on YouTube. It also set a record for biggest US debut on YouTube, accumulating 55 million views in one week.

In the end, the 2020 summer will be remembered for its numerous irregularities. One aspect that remains and will continue to remain the same though, no matter what takes place in the world, is music, and the role it plays in our society. Music is a powerful tool, and it has demonstrated that this summer by providing listeners worldwide with hits, and helping the 2020 summer be remembered with a “good note.”