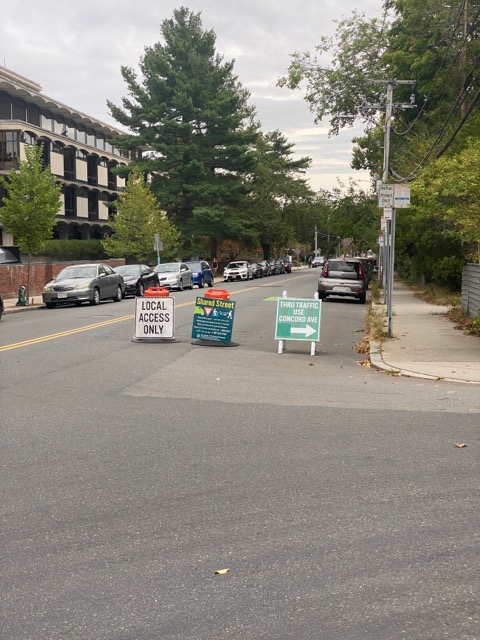 In response to the growing number of concerns related to COVID-19, the City of Cambridge designated Garden, Magazine, and Harvard Street as “Shared Streets.” On their website, the City of Cambridge defines Shared Streets as “Roadway space … shared by people walking, biking, and driving at low speeds.” The purpose of this pilot was to give pedestrians and bicyclists more room to safely travel to and from their essential destinations while social distancing from others. Signs appeared on lampposts and at intersections the week of June 15th, informing the public of the new status, and advising drivers to limit their speed to 10mph or less.

In many ways, the need to social distance has become a catalyst for improved bicycle infrastructure. Especially in urban areas like Cambridge, the lapse in traffic and preference to bike or walk over using public transit created the perfect opportunity for the city council to try to enact new infrastructure. While in the past simply the desire to have safer bike routes was not enough for the city to actively implement bike-centric road design, the ability to use the “because of COVID” argument was sufficient. In a similar manner, the death of the 55-year-old cyclist Darryl Willis in Harvard Square on August 18th expedited the process of a redesign of Harvard Square roads. In both instances, attempted roadway redesign necessitated by tragic events highlights the inefficiency of the city government to actively implement their Vision Zero initiative (intended to create safer roadways and eliminate traffic fatalities), adopted in 2015.

While the Harvard Square redesign offers protected bike lanes in some areas, as expected, it provides little progress in others. Cambridge, once again, has only fixed locations where it is convenient, or incidents have occurred. Likewise, the Shared Streets pilot gives the impression of progress, but offers minimal to no benefits. While signs indicate that pedestrians and cyclists have the ability to be in the roadway (in order to social distance), no physical barriers are in place to actually protect such parties. This gives pedestrians and cyclists the impression of safety where there is none, potentially leading to dangerous situations. To compound upon this issue, the 10mph yellow diamond signs in the roadways have no legal bearing whatsoever. As students who have taken drivers’ education know, regulatory signs (speed limits, one ways, no turn on reds, etc.) are white, black, and rectangular. These 10mph signs are simply advisory signs, meaning that drivers can continue to drive at 20mph legally in a supposed pedestrian environment.

Another key issue with the Shared Streets pilot is its ineffective attempts to divert traffic away from the designated streets and facilitate exclusively local traffic. The City of Cambridge hasn’t taken any steps (besides placing signs in roadways) that discourage traffic from using the shared streets. Either the city should actually enforce whether traffic on the roads is abutters only, or implement a better-protected network of bike lanes.

While it has good intentions, this pilot fails in improving the safety of pedestrians and cyclists, all the while drawing criticism from frustrated drivers trying to avoid signs placed in the middle of the frequented junctions. If a project is to draw the ire of drivers, it should be one that improves the livability, safety, and sustainability of Cambridge. There is the potential to create a Cambridge where parents feel as though it is safe enough to let their children bike to school. If the City of Cambridge is to truly advance into the future as they claim they want to, what they need to implement is a broader network of bicycle infrastructure instead of carrying out sub-par projects or approving initiatives laden with bureaucracy that merely give the impression of progress.