The Rays Way Is Coming to Boston 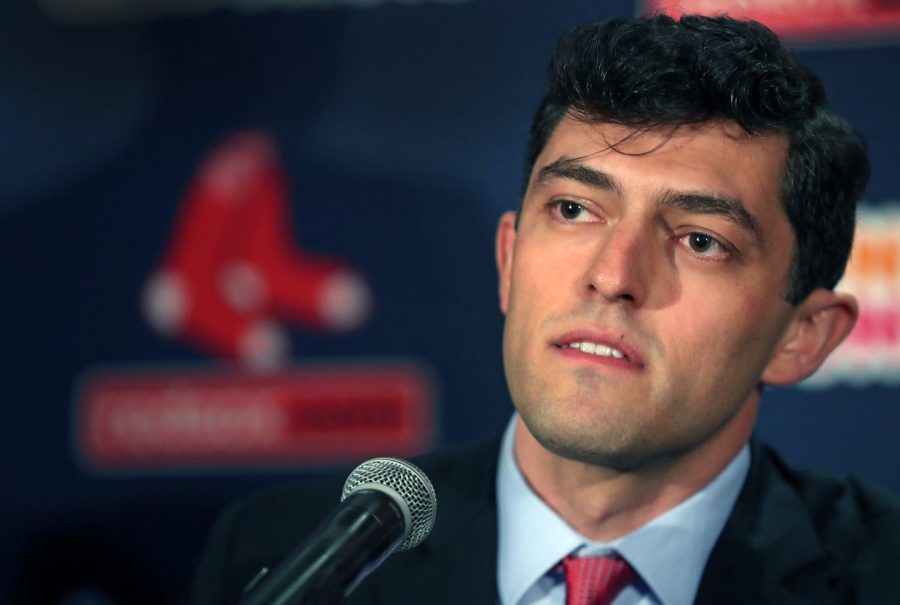 Photo courtersy of the Boston Globe

In recent years, the state of affairs of the Boston Red Sox franchise has been a roller coaster. In the 2018 season, the team recorded one of the greatest single seasons in MLB history with 119 total wins and a dominant World Series victory over the Los Angeles Dodgers. Despite this success, after 2018 the Sox were in a tough spot financially as the team’s high payroll threatened a steep penalty through the league’s Competitive Balance Tax (CBT)—a fee bestowed on teams who spend above a certain threshold in order to prevent big market teams from spending more than smaller teams. Instead of cutting spending then, Red Sox General Manager—Dave Dombrowski—dished out pricey contracts for Nathan Eovaldi, four years and $68 million, Xander Boagaerts, six years and $120 million, and Chris Sale, five years and $145 million. The massive spending prevented the Sox from resigning ace closer, Craig Kimbrel, and reliable eighth inning man, Joe Kelly. The lack of a bullpen caused by these departures was exposed when the Sox blew 31 saves in 2019, the second worst in the league, which among other issues led them to finish with 84 wins, 35 fewer than a season prior and a missed playoff berth. After the 2019 season, Dombrowski was fired, as the team’s ownership was fed up with his reckless spending and disregard for developing prospects. The high payroll and lack of talent in the minor leagues of the Dombrowksi-era Red Sox elicited the hiring of the antithesis of Dombrowski, Chaim Bloom. Bloom is a bright young executive hired from the Tampa Bay Rays that is poised to transform the Sox into a perennial contender, and yes that path has already encompassed trading franchise superstar, Mookie Betts.

Bloom is no stranger to running a budget conscious team—a trait that likely held significance in the Red Sox’s decision to hire him. In his tenure with the Tampa Bay Rays, he helped create the Rays Way: an innovative, data-driven approach to team building that is centered around rampant trading and an emphasis on player development. A Sports Illustrated article by Tom Verducci refers to the Rays Way as “a state-of-the-art convergence of New Age thinking; youthful, entrepreneurial conviction, and proprietary data that are the envy of the industry.” As mentioned by Verducci, the Rays Way is driven by the analytics and entrepreneurial thinking that gave the Rays 96 regular-season wins and a playoff run that took the team to game five of the American league Divisional Series in 2019, despite a payroll below $70 million—less than a third of Boston’s. Now, the Rays Way is headed to Boston and its possibilities on a team that can spend triple the money are boundless.

Bloom’s tenure with the Sox began with a flurry of signings and trades adding value depth options like José Peraza, Martin Perez, and Kevin Pillar while picking up a bevy of unheralded minor leaguers such as Jonathan Araúz, Chris Mazza, and R.J. Alvarez. This type of unflashy spending is reminiscent of the Rays under Bloom, and it will allow the Sox to trim payroll and acquire depth. Despite the frugality displayed during the offseason, Bloom still needed to cut more of the payroll to move below the CBT threshold of $208 million.

On February 10th, 2020, and after weeks of speculation, the Sox traded franchise superstar, Mookie Betts, and ace pitcher, David Price, to the Los Angeles Dodgers for prospects Alex Verdugo, Jeter Downs, and Connor Wong. The move received hefty criticism from fans and the media. Michael Bauman of the Ringer called the trade, “a disgrace for the Red Sox and for the league.” However, the trade will set the Sox up for years of success through the addition of top prospects and the trimming of payroll.

While Betts is still a universally recognized top-five player in baseball, he only has one year remaining on his contract at a well priced but expensive $27 million. For a team that is unlikely to contend in 2020, paying big money for a superstar is not the logical move, especially if they could reset the CBT penalties by trading him. In addition to trimming payroll, the Sox received Alex Verdugo, Jeter Downs, and Connor Wong in the trade. Verdugo is a promising young outfielder, who batted an impressive .294 in his rookie season with the Dodgers. Downs is ranked by mlb.com as the 44th best prospect in baseball and looks to be the team’s second baseman of the future with his ability to hit for average, power, and speed. Finally, Wong, an athletic catcher, has the versatility to play second base and the potential to contribute at both positions in the future.

While some will argue that what the Sox lost in the Betts trade was the chance to be suitors for Betts in the 2021 off-season, they are actually better off not signing Betts to a long term deal. According to Lou Merloni of WEEI, Betts demanded 12 years and $420 million from the Sox in 2019. If Betts declines in production or gets injured at any point over the duration of his contract, the team would be stuck paying his exorbitant salary. In 2013 the Sox signed former MVP, Dusitn Pedroia, to an eight year $110 million deal. The deal seemed like a bargain at the time until Pedroia suffered a terrible knee injury that has left the Sox paying his contract while he has been on injured reserve for three years and is unlikely to play in the final year of the deal. Even if Betts were to stay in MVP form, the financial burden of signing Betts could have prevented the team from adding other star players in the future, derailing the team’s hopes of success. For example, the Los Angeles Angels have Mike Trout, the universally recognized best player in baseball—who will presumably be remembered as one of, if not the greatest players of all time, for 12 years $426.5 million. Despite Trout winning MVP in 2016 and 2019 and placing second in MVP voting in 2015 and 2018, the Angels have not made the playoffs since 2014. While the prospects received for Betts may not balance out his talent, avoiding paying Betts lends the Sox the financial flexibility to create a team based on depth and versatility in accordance with the Rays Way.

The tactful and prudent moves made by Bloom in his opening offseason with the Red Sox will lay the foundation for the Sox to become a perennial championship contender. The team boasts profuse amounts of young talent in Rafael Devers, Andrew Benintendi, Michael Chavis, Bobby Dalbec, Alex Verdugo, Jeter Downs, and Tristan Casas, to name a few. The focus on depth and player development that earned a Rays team a playoff run—with a payroll under $70 million—will pay major dividends for a Red Sox team that has historically been willing to pay huge amounts of payroll, now that it has the flexibility to do so. Chaim Bloom and the Rays Way have arrived in Boston and the MLB is not ready for the juggernaut that is being built.