“ACAB” and the History of Policing in America 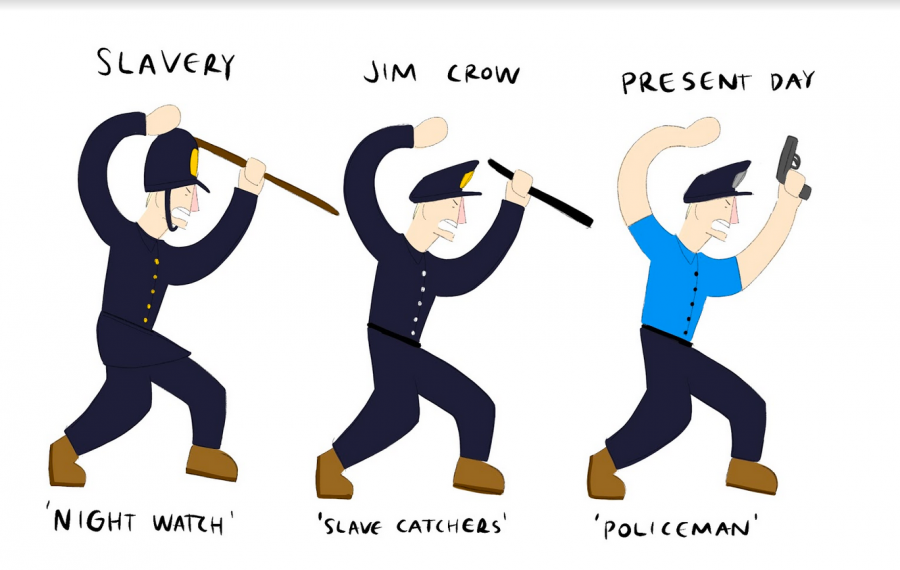 ACAB. This effectively polarizing statement meaning “all cops are bast*rds,” or 1312, the alphabetical order of the acronym, originates from the 1970s. ACAB was popularized by punk, anarchist, and alternative culture, and is sometimes associated with far-left or far-right groups. The particular word bast*rd is meant to convey corrupt or corrupted. Others choose to say “all cops are bad,” in place of bast*rd, as it historically is a racist term. However, it is still harshly critical of all police. Following the recent murder of George Floyd in Minneapolis, Minnesota, there has been significant public outrage against the four police officers that murdered Floyd, and the system that allows such murders to take place. The following riots and uprisings across the country were reminiscent of the riots of 1968 that occurred weeks after Martin Luther King Jr.’s assassination. Those riots responded to systematic racism, lack of protection for Black Americans under the law, and police brutality. Over fifty years later, activist groups such as the Black Lives Matter movement are still fighting for the same things. Protesters across the country are seen brandishing signs saying ACAB, and tagging walls with the acronym, and both controversy and curiosity are gravitating around this phrase.

The truth is that ACAB doesn’t mean each individual police officer is a horrible and racist person; it means that the system is inherently corrupt, and choosing to become an officer and feed into that system makes the individual complicit. Each and every police officer benefits from an organization that enables the active oppression of people of color and allows for “legal” murder. According to Mapping Police, a database of police violence across the country, 99% of police killings don’t result in a charge.

Police have had a long history of brutality against Black Americans, dating back to slavery. Southern states, in particular, created coalitions of white people dubbed the “Night-Watch,” that would track down runaway enslaved individuals, return them to their slave owners, prevent uprisings, and enforce disenfranchisement. The general goals of police officers today are eerily similar to the ones of the past, especially after the recent riots and protests. The police’s job at the time was akin to bounty hunting, and sheriffs would often torture enslaved people once they were captured. Police officers have been oppressors as long as Black Americans have been oppressed. During the Reconstruction Era, the police in the South would actively enforce segregation and make sure that racism was ever-present. This was one of the ways that Southerners in the ex-confederate states kept their power, utilizing the police force to maintain all rights for Southern white Americans while creating Black Codes and Vagrancy laws in order to arrest freed Black Americans for minor infractions. By “catching” Black Americans committing small or non-existent crimes, former Southern slave owners could legally re-enslave any black person. Reconstruction was meant to be an era of freedom and rights for Black Americans, yet soon after the Black Codes the South enforced, the critically damaging Jim Crow laws were enacted.

The law enforcement system is unfixable in many ways. It was built solely to oppress and strongly uphold racist beliefs and has thoroughly damaged the trust that Black Americans have in this country and the police. Modern-day slavery is a term used to describe a type of economic oppression through mass poverty in disenfranchised communities, a product of President Richard Nixon’s War on Drugs. The War on Drugs was a campaign that would both criminalize drugs and drug use to target the anti-war and civil rights movements, but would also cause the mass incarceration of Black men for minor drug offenses. Police would begin the damaging trend of pulling Black Americans over with minimal to no suspicion, frisking them, arresting them, and even planting illegal substances in order to arrest. The War on Drugs enforced and legalized racism within the police organization. Today, police are seen specifically targeting Black and brown communities to fill arrest quotas.

Police unions helped increase the number of incarcerated Black men and women while opportunities for growth and funding in those marginalized communities quickly decreased. These unions are known to be devoutly protective of police officers and have the power to influence legislation regarding the police force. Training is another flaw within the system. Shockingly, the training to be a police officer in Memphis, Tennessee, for instance, is roughly half of the training it takes to be a licensed hairstylist. De-escalation training is only required in a couple of states. Education is greatly lacking in the police system. Given the police system’s inherent racism, allowance for discrimination, and ineffectiveness, many, including myself, are calling for a complete overhaul and extreme defunding of the excessive 180 billion dollars spent on the police and the prison system. Instead, governments should reallocate that funding towards Black American communities and schools, while taking the time to examine the countless existing defects in the system. Major changes are needed in order to radically overhaul policing. For instance, stricter requirements are needed to become a police officer, ensuring that there is no association to hate groups. Furthermore, force should be used as minimally as possible, and excessive force should be met with a separate and unbiased review board whose sole job is to keep the biases and actions of that police force in check. However, tangible change from the very racist fabric embedded in the police system remains distant as protestors are only just now celebrating a charge in a very obvious murder case. Until that changes, ACAB.