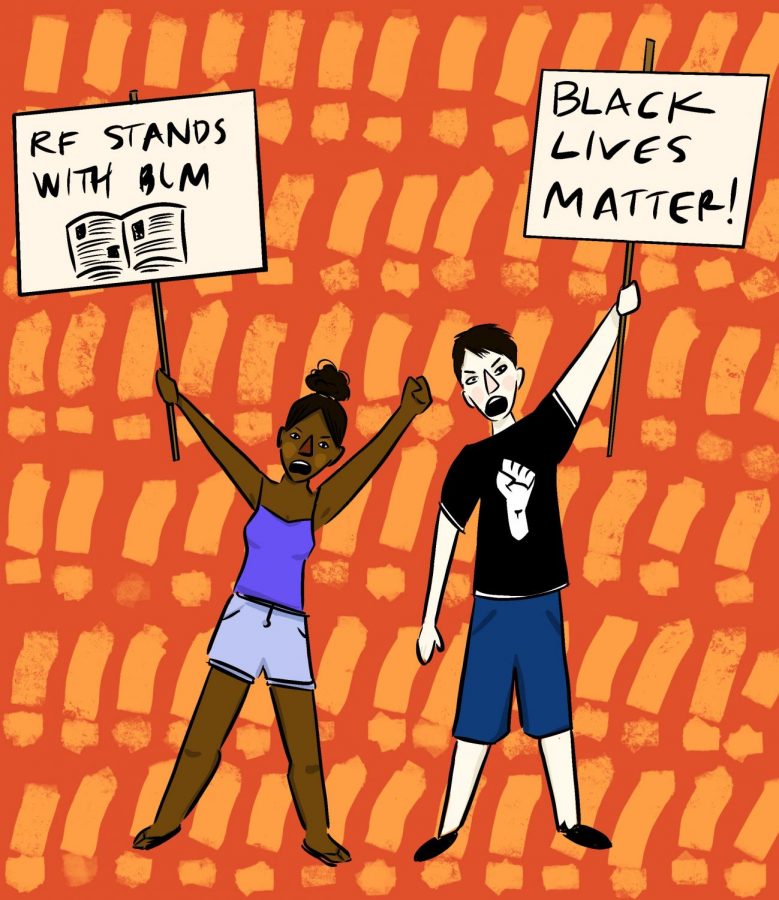 George Floyd. A father, a community member, a black man, a human being, was brutally suffocated to death by the very people meant to save lives. As caught on video by passers-by, for 8 minutes and 46 seconds, an officer from the Minnesota Police Department knelt on his neck despite his calls for help, for his mom, for his life. There were three other police officers on the scene, and yet none of them said a word, too righteous to believe that a man tasked with the job to protect and serve could ever do something wrong. People from every walk of life quickly denounced the police officer, many wondering how something like this could ever happen. For African Americans though, the answer is simple: George Floyd was black, and he would be alive today if he wasn’t.

George Floyd’s death has sparked outcry and outrage across America. For nine days and counting, people have marched to demand police reform and justice for his loss of life. Unfortunately, Floyd’s death was not the first of its kind. For years now, members of the black community have been calling for serious police reform, starting with accountability. These calls came to a head in 2015, with the shooting of Michael Brown. Later in the year, a video was released of Eric Garner being choked to death while calling out, “I can’t breathe.” The deaths of Eric Garner and George Floyd were almost the exact same; the only difference was how America reacted.

For too long, white Americans have tried to excuse the police for their actions. “He was resisting” or “He could have just listened to the police” are common arguments when black men are killed at the hands of police. With the death of Floyd, some white Americans have chosen to acknowledge that the police were in the wrong, but that does not address the true issue at hand. White Americans also must acknowledge that Floyd’s death represents much more than just a single act by the police. The institution of policing in this nation is deeply rooted in racism, and until white Americans, especially those with power, begin to call out the institution, no real change will come. It is not enough to say that the death of Floyd “hurt,” nor is it enough to say “Black Lives Matter.” Until concrete reform is enacted, police will continue to get away with the murder of black Americans every year.

As a high school newspaper, the Register Forum represents two groups of people: the media and the youth. During these times of unrest and calls for change, these two groups are the most prominent and both play incredibly important roles. The media has an infamous history of misconstruing the words and actions of black Americans. Not only does this consistently occur in entertainment, such as the TV show “Cops,”—a show most popular during the 1990s at the peak of the war on drugs—but is also actively present in some news outlets. Many protesters have called out these news stations and anchors by comparing how they describe the majority-black BLM protesters against the majority-white coronavirus deniers. The discrepancy between the two descriptions is despicable.

The purpose of the media is to report the truth. It is not to perpetuate and push long-lasting narratives about marginalized groups in America. It is not to share a one-sided perspective that is then internalized by its consumers. It is to make injustices known and seen, it is to educate, to spread awareness, and to serve American citizens. That is why it is heart-breaking that protesters have spread the phrase “Do not trust the media.” It is heart-breaking because in some cases, they are right. While it is counterproductive to generalize all media as having political motives, as there are news outlets that have been serving their purpose, others have not. As a newspaper ourselves, no matter that our audience is much smaller than that of Fox News, we, the Register Forum, pledge to reveal all truths, strive to uplift the voices of those oppressed in America because those are the voices that have been muffled for all of American history.

As high school students, this is our time. Young people were organizers during the Civil Rights movement, and we are organizers now. This is not a time to be complacent, uninformed or unmoved. We have the energy, the hope, and the determination to make a change. We also have avenues of expression that were not available during past efforts to abolish institutions built on systemic racism. We have social media, which, when used effectively, is an incredibly powerful tool. Its capabilities have expanded the effects of Floyd’s death to other continents, something seemingly unbelievable during past periods of unrest, such as the Rodney King riots of 1992. Although this is a period of mourning for the countless unnamed black lives lost to the police force, this is also a time of togetherness and support across the globe.

When the video of George Floyd’s murder first emerged, our immediate question was, “Who is going to write about what happened in Minneapolis?” Looking around our Zoom NewsStorm, we quickly saw that everyone there was either white or Asian. When black people are not writing about black issues, we are missing the voices that matter. It is naive to say that we are all living in the same America, that we all go through the same experiences, and that we are all treated the same. When we don’t elevate the voices of those that face the most adversity, we are a part of the problem. Greater diversity at the Register Forum has been a goal for our newspaper for a long, long time. We have brainstormed countless ways to achieve this goal because if we truly want to live up to our motto, then we must reflect everyone at CRLS, and the first step in doing so is to support the movements that demand justice. 1 in 1,000 black men are killed at the hands of the police in this country. If there is no drastic change now, when will there ever be? George Floyd matters. Breonna Taylor matters. Black Lives Matter.