Protesting For Your Right to Get Sick 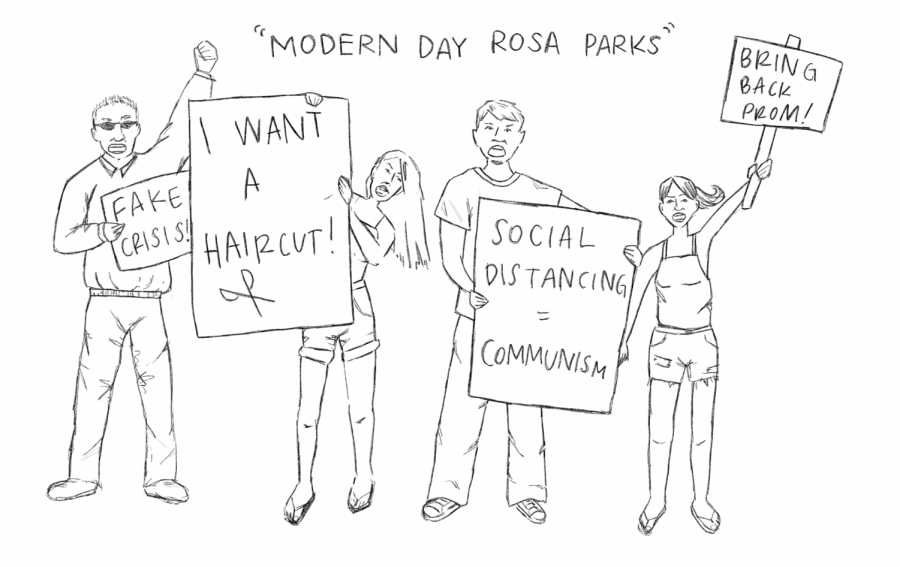 As the period of stay-at-home orders nears two months, businesses across America only continue to suffer. Mounting frustration over a situation that seemingly has no end has led to a recent movement to reopen parts of the country early, contrary to the advice of the Center for Disease Control (CDC) and health experts. Earlier this month, semi automatic gun-toting protesters descended onto the capitol building in Michigan, demanding a reopening of the economy. However, make no mistake: The individuals protesting their “loss of freedom” are not champions of their right to civil disobedience or, as Trump advisor Stephen Moore stated, a group of “modern-day Rosa Parks.” They are a less graceful and more fringe group, one that exemplifies a naive and broader movement of the alt-right attempting to sow division and reshape public opinion that individual rights require public sacrifice.

At the head of this vacuous movement to reopen is, unsurprisingly, our president, tweeting inflammatory statements such as to “LIBERATE Michigan” along with other states. The argument that Americans need liberation as if they were held captive is misleading. Public health policies in place were issued by elected leaders, and though the president seems to feel negatively towards state shutdowns, he has done nothing to lax the stay-at-home orders. What far-right protesters fail to understand is the importance of common good and the protection of the public, a principle in which nearly all laws are written.

Aside from the incredible ignorance it takes to downplay the severity of COVID-19, those opposing stay-at-home orders lack the trust and understanding to believe that policymakers aim to protect them. Protesters instead default to suspicion, a dangerous mentality that, if propagated by conservatives in power such as Trump, threatens to spill over into a partisan issue—one that is accepted as a norm. The protestors are yet another platform to deepen partisanship, masking attempts to undermine and embarrass the opposing party as a struggle over individual rights.

The irony of this situation is that the very ideology the quarantine protestors are defending is the force holding the United States back from the road to financial recovery. A belief in American superiority and foolish confidence is what led to the explosion of cases in mid February. Federalism, another cherished aspect of America, prevented widespread action in the beginning; states were left to fight over supplies and testing, as Trump didn’t stipulate a national response for what was a national crisis.

America’s cultish devotion to free markets also exacerbates this problem, being the only industrialized democracy without universal health coverage or paid family leave, both essential, especially for the working class, during this time. Patterns of hospital mergers and closings in an effort to boost profit has resulted in a healthcare system that we’ve come dangerously close to overwhelming.

The consequences of protesting are already showing. One week after a prominent protest in Kentucky, the state saw its largest recorded spike in COVID-19 cases. The preservation of individual rights that the protestors champion endangers a fast and successful outcome against COVID-19. In a time so unprecedented, protests about individual freedoms are baseless. The common goal of both sides, returning to normal while saving lives, cannot be set aside to appease those who are fortunate and greedy enough to campaign for reopening—that is only a false solution and a disaster waiting to happen.