The Register Forum • May 26, 2020 • https://registerforum.org/11899/news/dreams-since-social-distancing-have-become-more-vivid/ 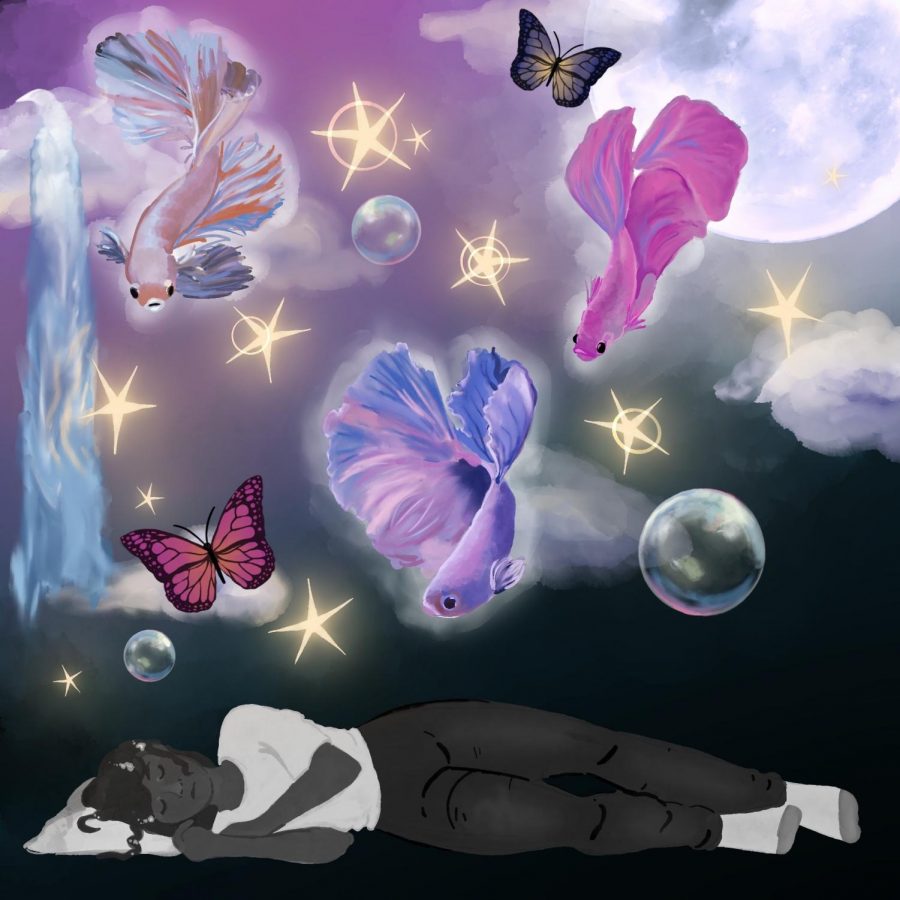 I sat under the table in an abandoned cafe in NYC. I thought I had defeated the robot gorilla—but, really, who could be sure? After a few minutes of silence, I emerged from my hiding spot and into the nearly deserted streets, looked both ways, looked down, and then looked up to find the robot gorilla charging at me. This is it, I thought, and then I woke up.

So much has changed since quarantine started: school has moved to online platforms, sleep schedules have shifted, and choosing outfits has morphed into finding the nearest clean pair of sweatpants. Suddenly everyone is finding themselves uniting over common experiences. We complain of general discomfort from wearing masks all day, we are starting to miss our classmates, and most perplexing of all, we have all begun to experience a newfound abundance of weird dreams. Indeed, if you have been experiencing a recent uptick in insane, vivid, imaginative dreams, you’re not alone.

The three biggest changes in dreams that scientists (and everyone who sleeps even a little bit) are noticing are increased dream recall, more negative dreams, and more imaginative scenarios portrayed in dreams.

Most people have no real idea as to why they’re suddenly experiencing this boost in dream memory. Junior Shay Burgman hypothesized, “I guess—at least it seems to me—that I remember my dreams more vividly as of late, and that’s most likely due to the more sleep I’m getting. While school was in session, I couldn’t remember dreams at all.”

The real reason behind this increased dream memory is two-fold. First off, anxiety and decreased sleep quality, two things many people are experiencing right now, are known to cause an increase in dream recall. Secondly, these, and other effects, of the pandemic have been shown to lead to an increase in “emotional disinhibition,” the state during REM sleep in which individuals’ emotions enter their consciousness. Sure enough, in a March 2020 study by the Lyon Neuroscience Research Center in France, it was found that people’s dream recall has boosted by 35% since the COVID-19 pandemic began.

The same study also found that people are on average experiencing 15% more negative dreams than usual. Lowe explained, “They have been slightly more negative than positive … Most of my negative dreams have just been about people being near me. Either I’m outside and it’s dark so I can’t see people until they’re too close to me, or I’m inside with a bunch of people and the space is just too small to get away from them. Even in my dreams, I feel anxious and guilty whenever a person I don’t live with gets within six feet of me.” Still, some of Lowe’s negative dreams have seemingly nothing to do with the pandemic—or anything, for that matter: “I keep getting pushed backwards down flights of stairs, which is very scary,” she recalled.

This “negative dream effect,” as it has been dubbed by experts, has been attributed to increased anxiety and is a phenomenon associated with people who have lived through traumatic events. In an interview with National Geographic, assistant professor of psychology at Harvard University, Deirdre Barrett, explained the two paths someone with this “negative dream effect” can go down: One, they may reenact the traumatic event or thought, in this case that would be any dream about the pandemic or any of its personally harmful effects—extreme social distancing in Lowe’s case—and two, they may substitute something in to represent the trauma—for instance, a robot gorilla, or getting pushed down the stairs. Barrett explained why more people typically have the latter of the two types of dreams, saying, “The virus is invisible, and I think that’s why it’s transformed into so many different things.”

The final alteration to the types of dreams people have recalled is the increase in bizarre scenarios. Researcher at the Lyon Neuroscience Research Center, Perrine Ruby, told National Geographic, “It may be one of the mechanisms used by the sleeping brain to induce emotional regulation.” She explained that it can often distract from the deep emotion rooted behind people’s dreams and thoughts.

Even the positive dreams, though, seem to have their own catch. Lowe recalled, “I’m finding that the positive dreams are worse because I don’t want to wake up. I had one that was just about being at an airport. Planes kept landing and people I knew kept getting off and we were all hugging each other and celebrating. It was jarring to wake up and realize that the wonderful feelings in the dream were so far from reality.”

Despite the layers of challenges brought by the COVID-19 pandemic, quarantine, and now, our shared experience of vivid, often frightening dreams, we may have some semblance of a silver lining in the creativity and wonder our dreams introduce back into our lives. Burgman told the RF he had a dream that he “was a blueberry muffin.” Junior George Moschapidakis dreamt, “I was flying over Cambridge, but, like, I wasn’t doing anything to fly—I was just gliding until I fell.” Senior Muhammed Abdalla dreamt: “I was partying with the senior class.” And perhaps most simple yet creative given our realities, Senior Esrael Abebe recalled that in his wildest quarantine dream, “I went outside and had a blast.”

Without these dreams we would be without excitement, without curiosity, without entertainment. The very fact that we’re dreaming like this is both a sign that our minds are still hard at work and another unknown to revel at and marvel in is a haven from all the turmoil. Abdalla reflected, “I think my dreams are still being processed based on my wills and goals. When school was still on, I would have dreams of doing what I needed to do, but now quarantine made setting goals all over the place, like my dreams every night.”