The Register Forum • May 27, 2020 • https://registerforum.org/11897/sports/interview-with-olympic-medalist-kara-kohler-in-quarantine/ 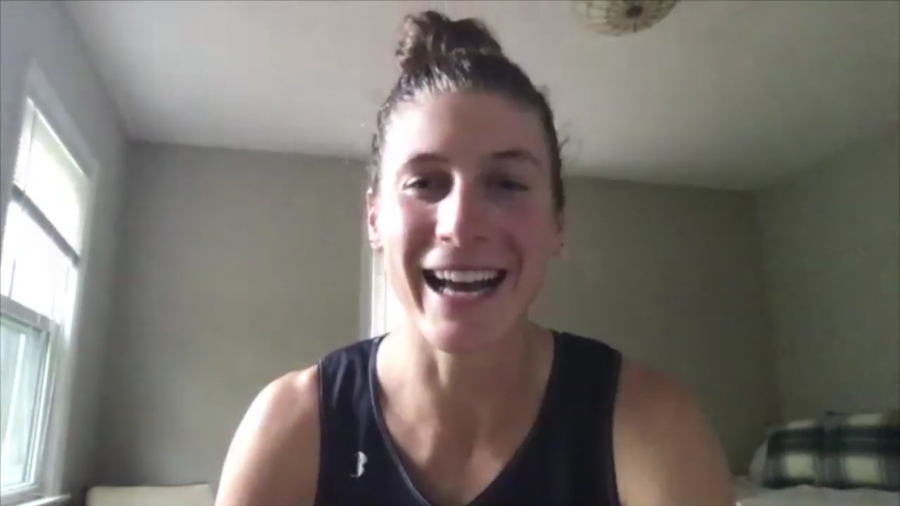 Pictured: Kara Kohler during the Zoom interview with the Register Forum.

Kara Kohler is an Olympic bronze medalist in the sport of rowing. She placed 3rd in The Head of the Charles last year, and was the 2019 US Rowing Female Athlete of the Year. Kohler is well known in the rowing world for becoming a world champion when she was just 19 on the US under 23 team. She is still on the national team today, trying to get to the Olympics.

Register Forum: Did you expect quarantine to happen? Did you see it coming?

Kara Kohler: I mean, yeah. I think there was a pretty predictable progression, so it wasn’t unexpected. That’s where the rest of the world was headed, so I got a glimpse of what was coming. It definitely was not a surprise when the shelter in place was announced in New Jersey. My parents are in California, so they were about a week or two ahead of us. I’m being locked down at home, so [it’s] not a surprise.

RF: How does quarantine and the coronavirus affect your life? What are some of the biggest challenges? Is there anything good that you think can come from it?

KK: The biggest effect has just been not being able to train with the team, so adding an extra challenge into training because training for three [or] four hours a day, doing a monotonous motion can be pretty gruelling. [It’s been hard] finding the motivation to keep up with the training and working towards our goals of being on the olympic team while being alone.

RF: Is there anything good that you think can come from [quarantine]?

KK: Yeah, good, right here! [Kohler points to her new puppy, named Luna, that’s been jumping on her and licking her face throughout the interview] I adopted Luna four weeks ago, so during the midst of all of this, and obviously if things had been going to plan, now would not have been a great time to adopt a dog, in the thick of training for the Olympics. So that’s one good thing! Another good thing is… for my teammates, who are somewhat new to the training center and are still developing, it gives them some extra time for them to train to make the Olympic team. For myself, this year has been a bit rough for me in terms of my health, so I’m pretty thankful for the extra time, even though I don’t enjoy seeing the world in pain and crisis. But, if there’s one good thing, I think we can all benefit from a little extra time, if we stay on top of our training and look at it as an opportunity rather than a setback.

RF: Do you still plan on going to the Olympics? How does the quarantine affect your long-term goals?

KK: I definitely still plan on going to the Olympics. That’s still my goal, and the passion and the desire is all still there …. I’m viewing it as an opportunity to work on things I struggled with in the past year or so, just [for] the next … fourteen months to work on things. I definitely still want to go to the Olympics, win the single, win a gold medal.

RF: How do you have practice in quarantine? What do you do? How often do you do it?

KK: Man, it’s been a struggle to find a routine, because the lines are blurred between rest and [work]. You know, separating your time out when you’re trapped, basically, in your own home. There were a couple weeks that I struggled with getting up and getting out the front door to the garage and motivating myself to sit on the erg [indoor rowing machine], alone. There’s no one to show up to but yourself, so that can be a battle, but in the past two weeks, I’ve done a much better job. We’ve been given training from our coaches, and we also did a team half-marathon [on the erg] over zoom … that was something that definitely motivated me to make sure I was getting all the training in at a reasonable hour so that I was well prepared to show up to that zoom session and see all my teammates and have a decent erg [session]. I connected with my teammates, and I’m keeping structure. You know, everyone says “keep some semblance of a routine, keep structure”, but it’s very hard. I did not do that for the first couple of weeks, and then definitely got back on top of my motivation. Luna helped me stay on a more structured schedule, too.

RF: Do you have lots of meetings with the team?

KK: I wouldn’t say lots. We’ve had a couple with the coaches. So individual meetings, just to check in and see how we’re doing …. We haven’t really had any team Zooms besides from the half marathon, but that wasn’t really a meeting, that was more [of] a hype erg session! [It was] for US rowing and for ourselves. I think we might actually have some next week, so I think the coaches like watching us erg over zoom [and] wanna see us all again, so we may try that out next week. But we have a group chat that [is active], and we stay in touch pretty well.

RF: How do you motivate yourself without the team?

KK: Yeah, it’s hard without the team. I have to remind myself that we’re all out there, fighting the same battles. I think about everyone else, and realize that I’m sure they’re all showing up to do the training, and when we come back, I wanna be ready, hitting those percentages. So, I think about that when I’m struggling to start a session, or in the middle of a workout that’s hard. I think about how I wanna show up when the time comes, I want to be fit, I want to be fast.

RF: What’s it like to train really hard every day, and not be able to do it in the normal schedule that you’re used to?

KK: For myself, I’m used to training alone, so I don’t mind it too much once I’ve actually started the workout. The hardest part is starting for sure.