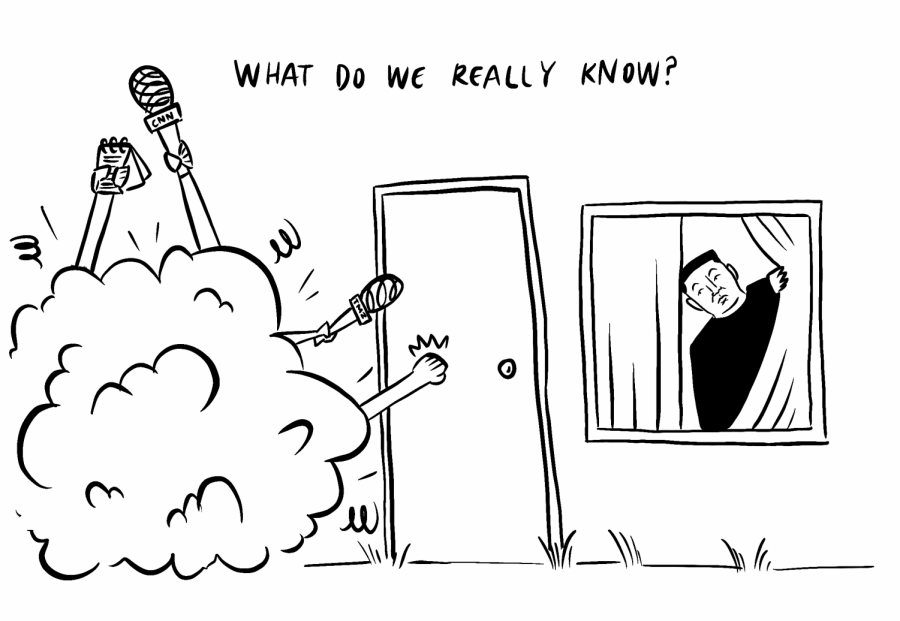 What happened to Kim Jong-un, the infamous North Korean dictator? Where was he? Did he die? Was it a botched surgery? Did he contract COVID-19?

These were all questions people around the world were asking as the possibility of the death of an unpredictable, reckless, nuclear-wielding dictator filled the news. Nobody knew anything for sure, and many of the credible news outlets were making wild claims based on unreliable sources. And so, the world waited.

Then, on May 4th, the North Korean government sent out a picture of a smiling Kim opening a fertilizer company. He didn’t look the least bit dead, although it is difficult to find any reliable information about the dictator at all. The fertilizer plant image could very well mean that all of the reporting was nothing more than a farrago of misinterpretation, non-information, half speculation, and outright guessing. As the Washington Post put it, it was “an international game of telephone.”

So how did this happen? From the start, the story didn’t rest on reliable information.. The first information on Kim Jong-un’s health issues was written by the Daily NK, a South Korean website that shares the daily news, gossip, and rumors about North Korea. The story, posted on April 20th, said that Kim was recovering from an unspecified “cardiovascular procedure,” allegedly due to his obesity, fatigue, and heavy smoking.

More importantly, the Daily NK also claimed that Kim never showed up for the annual ceremony of “the day of the sun” that occurs on April 15th, which marks the birthday of North Korea’s founding dictator, Kim Il Sung, Kim Jong-un’s grandfather. Unfortunately, as Robert Lauler, the English language translator for the Daily NK explained later, there was a problem with how the site translated “cardiovascular procedure”, turning it into “heart surgery”, a much more serious and concerning phrasing that found its way into many news sites.

When asked, the South Korean government continued to downplay any questions about Kim’s health. “We have no information to confirm regarding rumors about Chairman Kim Jong-un’s health issue that have been reported by some media outlets,” South Korean presidential spokesman Kang Min-seok said. “Also, no unusual developments have been detected inside North Korea.”

President Donald Trump said in a press conference that he “had a pretty good idea” of what was going on with Kim Jong-un, but that he was unable to tell the press. “I just hope he’s doing fine,” Trump said. “I’d like to see him be well and we’ll see how he does.”

A United States official who spoke under anonymity said that the White House was aware before the reports started that Kim might have some health issues. Still, the South Korean government tried to avoid any conflict. An anonymous official from South Korea’s National Intelligence Service challenged the accusation, saying the agency couldn’t confirm nor deny whether Kim had surgery.

After being heavily criticized for having little evidence, the sketchy Daily NK updated its story, referencing sources without names like an official “with direct knowledge,” a “second source familiar with the intelligence,” and “another US official.”

All it took was for CNN to take up the report, use the words “grave danger,” and the story spread like wildfire. TMZ proclaimed under a “breaking news” banner that Kim Jong-un was dead. MSNBC host Katy Tur declared on Twitter that he was brain dead. The New York Post said that an operation to insert a stent into Kim’s heart failed “because the surgeon’s hands were shaking so badly.” Some said that Kim was in a coma, or that one of his guards had shot him, or that he had been killed in a coup, or that he got the coronavirus. There was even a semi-cynical hashtag that went viral on Twitter: #KIMJONGUNDEAD.

Thus, while the world battled COVID-19, it had yet another thing to worry about: the possibility of the death of one of its most unpredictable and ruthless rulers.  Several questions kept people awake at night: Who would take over the country? Had the death of Kim Jong-un been a declaration of political war?

“Any leadership change in North Korea could increase the threat of instability on China’s border and raise questions about control of the country’s expanding nuclear arsenal,” Time Magazine said in a worrying report.

Some, like Cheong Seong-Chang, an analyst at the Sejong Institute in South Korea, said that there likely would be little to no conflict over the question of who would become Supreme Leader of North Korea, as Kim Jong-un’s sister, Kim Yo Jong, is already deeply rooted into the government of her country, and most of North Korea’s government agrees that the leadership should stay within the Kim family. However, others, like Koh Yu-hwan, a North Korea expert at Seoul’s Dongguk University and a policy adviser to South Korean President Moon Jae-in, believe that Kim Yo Jong could be reduced to a figurehead as other current members of the government make the moves for her.

Out of the blue, amidst panic, strife, and second-guessing, the North Korean news agency released photos showing Kim Jong Un applauding, cutting a ribbon and standing with his hands behind his back at the newest fertilizer factory.

The news agency reported, “All the participants again burst into thunderous cheers of ‘hurrah,’” with its usual flattering coverage of the leader. It said that the dictator “warmly acknowledged the builders and masses raising thunderous cheers” and continued to take a tour of the factory, along with senior officials from the ruling Workers’ Party.

And so, as all of the photos and speculation drift along in the media’s stories, everyone seems to be wondering the same thing: What do we really know?