Valentines Day Has Been Corrupted by Consumerism

The Day of Love Has Lost Its Authenticity 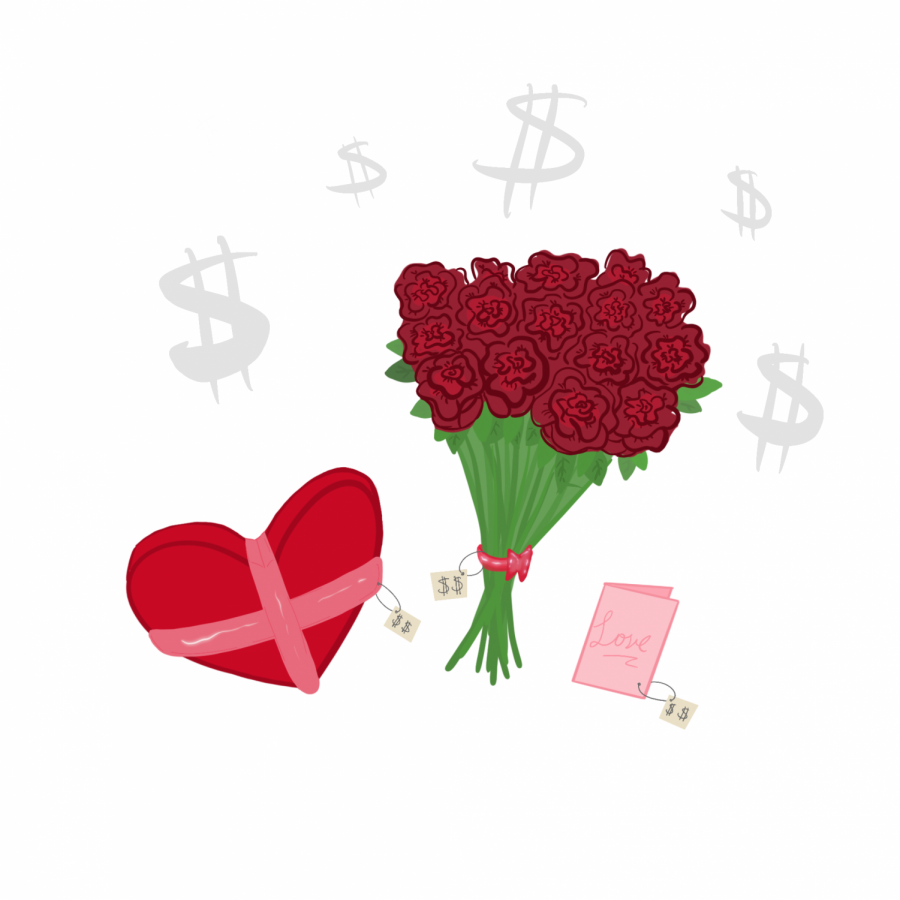 Consumerism has made Valentine's Day a materialistic holiday.

In much of the world, February 14th marks not only Valentine’s Day, but also an influx of chocolates, roses, and other consumer goods typical to the holiday for shoppers everywhere. What seems less popular is an actual interest in showing love in ways other than buying something. In an increasingly materialistic world, this day, originally created to celebrate love has become a massive opportunity for corporations to make as big of a profit as they can, capitalizing on a very temporary market with a culture of spending tied to it. In fact, Americans alone are expected to spend an excess of 20 billion dollars on gifts, jewelry, and other products for Valentine’s Day. To put that into perspective, the average an individual spends on Valentine’s day products is $147.Whether or not those billions of dollars translate accurately into feelings of love, it is clear to see that the true winners of Valentine’s Day are the large companies off of this increasingly materialistic holiday.

Brands such as Hallmark have become staples of Valentine’s Day. So much so, in fact, that the term for a holiday which only exists for corporate reasons is called a Hallmark Holiday. Other companies, such as Hershey’s and Tiffany have indoctrinated the public into believing that love can—and must—be measured by spending money. Because of this assumption, consumers are guilted into spending more than they should—rather impulsively, as well—in order to show their love. The more one spends on the holiday for their loved one, the more they care. Conversely, the less an individual spends, the less love they have, which drives extreme spending.

Valentine’s Day was originally celebrated in various Christian denominations as a feast day for the martyr St. Valentine, who has long been associated with courtship and love. The holiday wasn’t always centered around romantic love either but was a day to recognize and appreciate blessings such as families and friends, as well as lovers. Modern Valentine’s Day practices have very little resemblance to traditional celebrations in the 1700s, following the enormous success postal companies had with sending cards.

Valentine’s Day also pushes expectations upon the public over the “model relationship.” A majority of advertisements that companies put out display couples that are predominantly heterosexual and avoid showing other relationships, such as couples that are interracial relationships. Companies stray away from including couples that deviate from the “norm,” even in countries that do not have a white majority. This perpetuates a certain standard about relationships that lends precedence and value to couples that are white than to the plentiful amount of diverse, that exist without conflict. This image of a “perfect couple” that Valentine’s day drives into the eyes of consumers also causes guilt about body image, about the status of relationships, and also about confidence.

This stress over the norms of Valentine’s Day and perceived notions about love can lead to a multitude of feelings such as loneliness, frustration, and pressure to be in a relationship, as people are “supposed to be in love” at this time of the year. This leads to a tragic spike in suicide and suicide attempt rates. A Missouri suicide hotline reported that the number of calls they received rose almost 200 times the normal level around the 14th of February. The holiday has transformed what once was a holiday celebrating the love around people into a magnifying glass of the love some people lack in their life.

The original point of Valentine’s Day was the opportunity to express gratitude to those you care about. But this should not be limited to one day, and should not need to be promoted through consumerism. Commercialization has ruined the essence of the holiday, making love shallow and easily replaceable with temporary items. Don’t wait for Valentine’s Day to do something special.