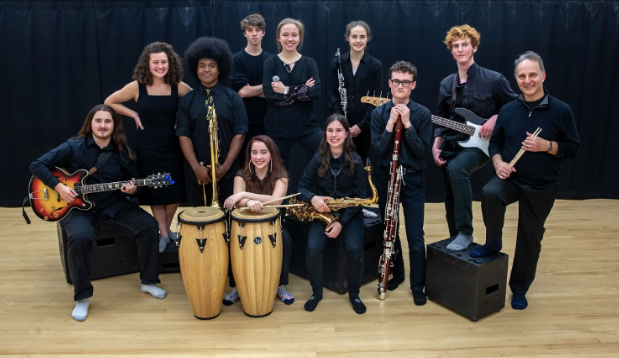 In the basement of the CRLS Arts building, hidden and often passed by without a second glance, lies a large black door. The look of it is menacing at first, and students hesitate to turn the knob. The door barely opens, and the sound of three taps escape the room, then two more follow it, until a whole rhythm is played. The sound of the snare is recognizable and so is the crash of the cymbals. A guitar solo is added on top of that, completing the mood. This is the practice room for the CRLS Jazz Ensemble.

From January 13th to 18th, more than 2,000 miles away, another group of CRLS musicians was getting ready to perform at the prestigious Panama Jazz Festival. Senior Amelia Bronfman held her clarinet in one hand and used her other one as a fan to try and cool down in the humid weather of Panama. Usually a confident player, she was nervous to perform her jazz solo in front of the crowd. She remembered the way the musicians flawlessly played during the performances of the World Jazz Ensemble she attended, making the urge to dance impossible to sustain. “Music has been a real opportunity to go to new places like Panama and meet new people,” she explained. “Mostly, it has been a chance for me to grow as a person in discipline and attention to detail.”

With that thought in mind, she saw the rest of the World Jazz Ensemble hyping her up. A group of ten talented musicians who, through the different instruments they play such as drums, bassoon, trombone, saxophone, vocals, or clarinet, are able to all unify under the same admiration for music.

While in Panama, the group taught, attended, and even performed in masterclasses, playing songs like “Black Orpheus.” They traveled around the country by going to the old capital city of Panama, where they met locals and exchanged their passion for music with them.  They attended concerts and festivals and were amazed by the performances put on by professional musicians.

However, back in the cold winter of Boston, on Friday afternoon from 2:30 to 4:00 PM, the percussion and drumline, an ensemble created by Mr. Guillermmo Nojechowicz for students passionate about music, were practicing. Mr. Nojechowicz recounts the story of how he started the program four years ago with the guidance of his former supervisors, who initiated the idea of starting a drumming program at CRLS. Mr. Nojechowicz was willing to help with his professional drumming skills; “And I said, ‘What do you have in mind?’ and my former supervisors said they wanted a drumline and percussion ensemble.’’

Mr. Nojechowicz aspires to teach the importance music can have in a person’s daily life, and how it is a tool that complements other skills, like management and organization. Moreover, he hopes that his students experience what it is like to be on stage: the butterflies-in-the-stomach feeling, the looks from the audience, the gradual comfort on stage and with the instrument, and finally, truly getting into the music. “When students are able to feel what the music is saying, that makes them great musicians,” claims Mr. Nojechowicz. Through music, students are able to express themselves. As junior Antonia Ford admits, “I enjoy how [music] comes like second nature to me the most.”