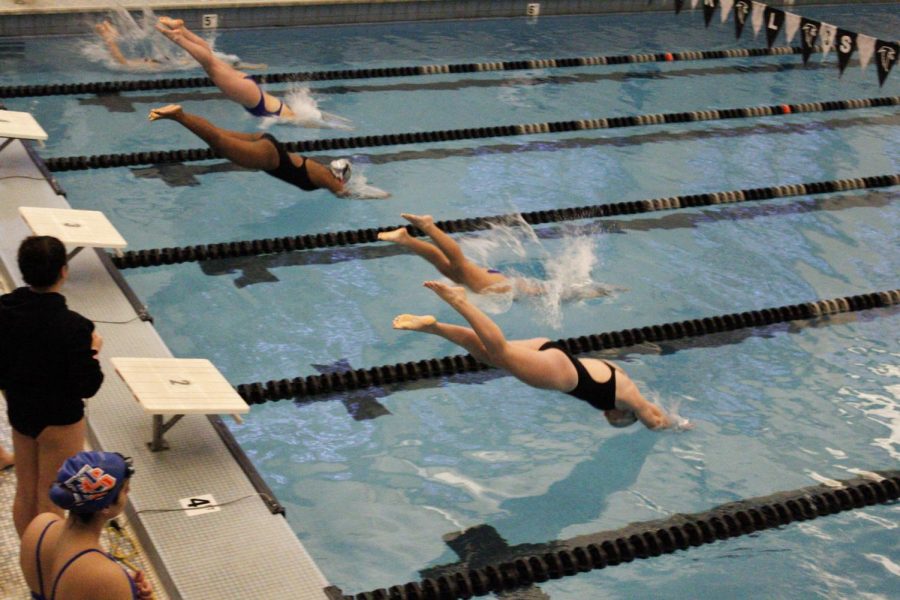 The CRLS swim team received a new coach for the 2020 season, Doug Boyd.

The CRLS Swim and Dive team took on this year’s season like no other. The two sports, which are offered in the winter, are not only extremely rigorous but require non-stop mental toughness from their athletes. From dives like triple full twist backflips to swimming events like a 500-meter freestyle, both the teams learn to keep motivated through continual support of one another.

A turning point began for the swim team when they acquired their new coach, Doug Boyd, this 2019-2020 season. Coach Boyd started competitively swimming at age four, has coached college swimming since he was 22 years old, and has now coached swimming for over 30 years. Since taking over for both girls and boys teams, he has taught the team the importance of unity since he noticed that “a lot of times in swimming, the expectation is that it is an individual sport. People tend to think that if they’re not at practice it doesn’t affect everyone else. The way I approach it, it does affect everyone else in that swimming is a team sport.”

Ezra Barneson ’22 and Lucas Tedesco ’20, the co-captains of the boys swim team, have definitely noticed Coach Doug’s values in team collaboration. When the swimmers discussed their season coming to an end, Barneson voiced that the team is very lucky to have Coach Boyd. Tedesco chimed in, explaining, “Because his practices are so strict, they are very effective. Halfway through the season, we were on track to meet all our goals.”

However, the boys also mentioned that the coach’s punctuality was a tough transition for many on the team: “Several kids were kicked off the team because of attendance issues,” Barneson reflected. “It made the season turn sour for a lot of people.” Tedesco agreed, pointing out that “sadly we didn’t get to achieve [all our goals] because of the practice attendance. I really hope the goals that I didn’t accomplish in my last year will be accomplished by the next boys on the team.”

As for the team’s improvements, Camille Rheault ’22 was the sole swim athlete this year to break an individual record, beating her own freshman record of 102.99 seconds in 100-meter backstroke to 102.2 seconds during a meet against Bedford. Rheault reflected that the record-breaking day “was very hyper, and I think that’s why I got the record. Everyone was jumping and screaming. In addition to getting a record, I also made the qualifying time for States so it was very exciting. My teammates were so supportive.”

Abigail Price and Grace Pepin, also sophomores, are going to the swimming States this year for a relay race on Saturday, February 15. The two told Register Forum the significance of doing an event as a collective group, where all swimmers contribute to the overall time. Price stated how teammates boost her energy as “other people [are] there with you. It’s different than when you swim just by yourself.” Pepin agreed: “I think relays are so much better because you get to cheer everyone on and it is a lot more motivating to swim for everyone else.” Simultaneously, the dive team has also gone through an exciting season, with two seniors heading off to sectionals and States: Tyler Killian and Ezra Howe. The dive team had a small group of three boys and four girls this year due to a bulk of upperclassmen leaving CRLS.

Dive coach Sarah Wilson is back for her second season at CRLS. Coach Wilson reflected that one reason that she took the coaching spot for the CRLS team is that “the coach before me moved away and then there was a full year without a coach. Being a diver in high school and in college, I had years without a coach and it’s really hard to improve, really dangerous, and it’s frustrating.”

Howe explained how Coach Wilson has helped him improve: “I am very excited for States because this year I have a chance to qualify for All States. I learned a lot of new dives this year. Before, when we had no coach, it kind of paused the progress for a year. But this year, I’ve gained experience.”

As the Swim and Dive State meets approach and the season comes to an end, the teams’ bonds will stay unbroken. With fun practices and all levels joining the sports, the teams strongly recommend that students with determined mindsets join the winter sport next year.