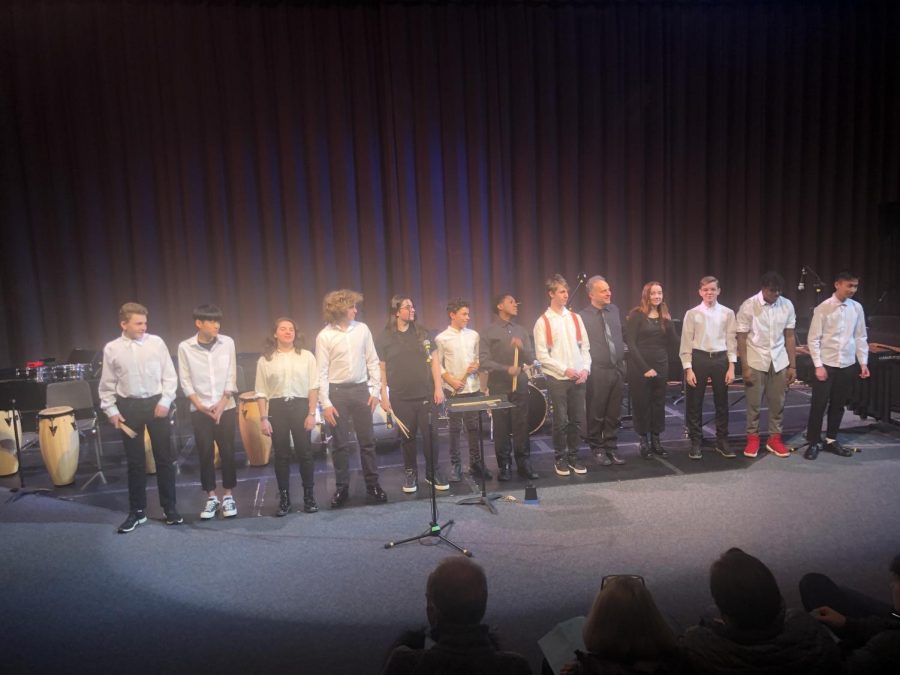 CRLS Percussion Ensemble was one of the many groups who performed on January 8th.

On Wednesday, January 8th, the Percussion Ensemble, the Big Band, the Vocal Jazz Ensemble and the World Jazz Ensemble came together to perform on Winter Jazz Night at the FitzGerald theater. The show started off with the Percussion Ensemble, directed by Guillermo Nojechowicz. The first song, Sunrise, was composed by CRLS’ very own Riley McKinney in collaboration with Jordan Laws. When asked about the creative process of making the piece, McKinney said it was a “really cool process” starting off with McKinney “just fooling around, playing chords” and gradually others began to join in. “We ended up just jamming for like 7 minutes,” McKinney recalled. After Sunrise, the Percussion Ensemble played an enlightened rendition of African Sun Walk, followed by director Guillermo Nojechowicz’s original percussive piece entitled Haitian Song, which utilized improvisation, and had the whole crowd grooving along.

After the Percussion Ensemble, the Big Band, directed by Nathan Powers, took the stage with an electrifying performance of Indiana, followed by the classic, Can’t Stop Loving You. When Can’t Stop Loving You began to play, the entire audience lit up, with many audience members recognizing the song. Anais Killian ‘22 gave a passionate solo on the dramatic It Had Better Be Tonight. Killian noted that “it was my first time singing in a jazz fashion with a band that I was really close with. The song was perfect for my comfort range… I loved the experience!” The Big Band’s final song, Stevie Wonder’s Sir Duke, was performed flawlessly and soulfully, with a stellar saxophone solo from Emma Blanc.

The Vocal Jazz Ensemble took the stage next, directed by Dr. Ivan Stefanov. They kicked off their portion of the show with the delicate and somber classic, My Funny Valentine. After the song finished, Dr. Stefanov told the audience that “it was a pleasure to sing such a beautiful arrangement with such a talented group of people.” The Vocal Ensemble picked up the mood with a cheerful rendition of Chattanooga Choo Choo. Zareen Brown ‘22 reflected on the experience with the Vocal Ensemble, saying “it was interesting to sing with people I don’t normally hang out with. Dr. S really pushed us to expand our ranges and to try new things.”

The final performance of the night came from the now internationally renowned World Jazz Ensemble directed by Guillermo Nojechewicz. Following the concert, the World Jazz Ensemble went to Panama to participate in the Panama World Jazz Festival. The set was creative and technically difficult yet, it also had a lightness and humor to it that made it a joy to watch. Abby Jarcho ‘21, a vocalist for the World Jazz Ensemble commented on the sense of community the World Jazz Ensemble, saying, “this year, we had amazing chemistry and sense of responsibility for both our conduct as people and our music. It has been a blissful process and rewarding finish with all of our concerts.” The majority of the songs performed at the Jazz Night were student chosen and student arranged, including the incredibly complex Jazz Crimes, a highlight of the performance. The ensemble finished off the show with a dynamic duet between Jarcho and graduated CRLS legend Hanna Carney in an inspired performance of Serpentine Fire by Earth, Wind and Fire.

The entire show reflected a commitment and precision only achievable from hours of effort and hard work. The talent of the students was showcased beautifully, with the careful orchestration of the three directors.