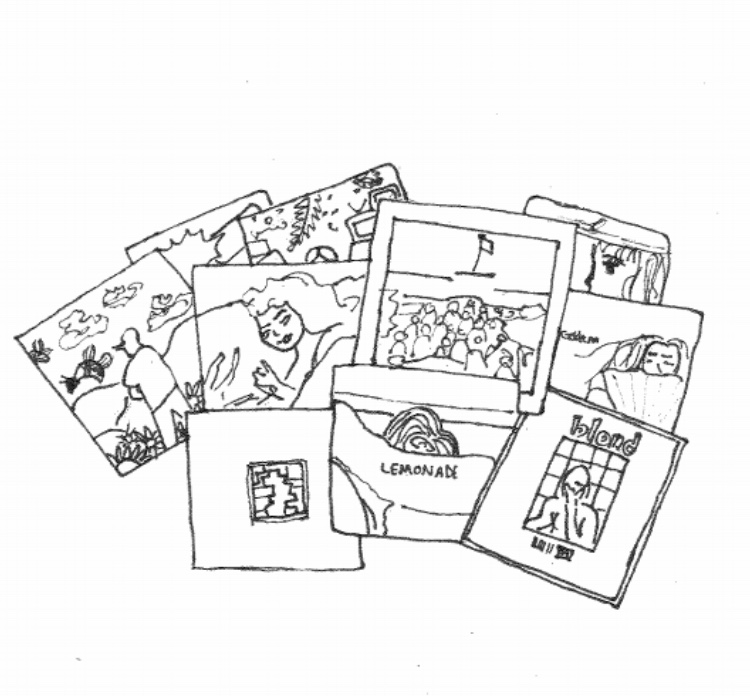 The top albums of the 2010s highlight both shifts and continuities in the musical world.

The 2010s meant transformation for the music industry. Artists deviated from physical releases in favor of streaming platforms, rap music overtook pop, and music TV broadcasts, like MTV, hit record lows for viewership. However, despite these dramatic shifts, the art form of the album still managed to maintain itself.

For the sake of inclusivity, I only allowed each artist to have one entry on the list, so this may be the reason why you don’t see your favorite record(s) here. I ranked these albums based on three factors: the cohesiveness of the album (how it fits together), its originality (what it brings to the table), and its listenability (if it’s catchy or relistenable).

Stripped down to piano and politically charged, Lana Del Rey’s artistry in the Jack Antonoff-produced Norman F***ing Rockwell won the hearts of many critics in 2019. Del Rey, who arguably started a new wave of alternative pop in the 2010’s (look to the likes of Lorde and Billie Eilish), continues her reign with nostalgic sounds and provocative lyrics. Standout tracks include “Cinnamon Girl,” “Happiness Is a Butterfly,” and “How To Disappear.”

When country radio shut out Kacey Musgraves for being openly pro-LGBT in her music, she clapped back with Golden Hour, an album that celebrates living life to the fullest. In her boldest record to date, Musgraves stretches out of her comfort zone into a galactic, dance-influenced, country sound. Musgraves admitted to being on LSD while penning album-opener “Slow Burn,” a beautiful, well, slow burn about departing from her southern upbringing. She later triumphs with the enchanting “Space Cowboy” and the alluring “Happy and Sad,” closing the album on uplifting piano-ballad, “Rainbow.”

Red perfectly captures the nostalgia of the 2010s in one of Swift’s most daring records both lyrically and auditorily. Swift plays to her strength of constant reinvention—whether it be on arena rock opener “State of Grace,” folk-country masterpiece “Sad Beautiful Tragic,” or polished pop anthem “I Knew You Were Trouble.” However, “All Too Well,” a climactic heart-smashing ballad with somber, masterful lyrics, proves she deserves a spot as one of the greatest songwriters of our generation

In her debut album, SZA shows off her charisma and vocal talent with the powerfully concocted R&B masterpiece Ctrl. She effortlessly hops from one catchy hook to the next, the standouts being “Prom” and “Broken Clocks.” SZA brings life to the album with her hypnotic voice and witty lyrics, making her one of the biggest breakout stars of the decade. Listeners begin this album obsessed with its sound, and end it infatuated with SZA’s persona.

Flower Boy works so well because its smooth, easy-listening tracks are contrasted with its anxious, sincere lyrics. While Tyler’s sexual orientation was previously ambiguous, it was on Flower Boy where he started alluding to being on the LGBT spectrum— a risky move as the rap industry remains very close-minded. In the dreamlike “See You Again,” Tyler raps about an ideal lover during a dreamy hook. Other album standouts include “Garden Shed,” “Boredom,” and “Glitter.” Flower Boy shows Tyler’s career in the height of its bloom.

Rising to prominence in the 2010s, Frank Ocean gained traction for his well-loved style of alternative R&B which is showcased in his previous record Channel Orange. However, his sophomore record Blonde proves that Ocean’s whimsical sound is no fluke. Through more mature instrumentals and lyrics, Ocean shows he’s still not afraid to step out of the confines of pop. Ocean sets off the album with the emotional and lullaby-like “Nikes,” continuing into the soft, fan-favorite “Ivy.” On “Solo,” a standout track, Ocean displays his vocal talent and range in a sentimental call to his ex-lover. Other standouts include “Self Control,” “White Ferrari,” and “Pink and White.”

While Kanye West remains one of the most polarizing figures of the decade, it is impossible to deny his amount of talent and musical influence. In what was arguably the height of his career, he dropped My Beautiful Dark Twisted Fantasy, an album that deals with themes of escapism and fame. In an unfiltered spew of emotions, West vents his heart out in tracks like “Runaway” and “Hell of a Life.” Overall, MBDTF is a successfully constructed piece of art.

After the commercial success of her debut album Pure Heroine, Lorde decided to take a hiatus to focus on her life, as she was only sixteen. Many fans and critics, including me, were scared that Lorde would lose the honesty and groundedness she showed in her debut, but we were not disappointed with Melodrama. In the most concise pop effort of the decade, Lorde wistfully sings about a fleeting relationship. “The Louvre” describes an “endless summer afternoon” that she perfectly captures in the song’s infectious sound. However, it is the sharp melancholy of following tracks “Liability” and “Writer in the Dark” that make you empathize with  her. The album is full of little instrumental gems, such as the unexpected trap beat in “Sober II,” which is accompanied by an orchestra. You can hear producer Jack Antonoff’s magic touch both on bittersweet “Supercut” and Gen Z anthem album closer “Perfect Places.”’

When Beyonce surprise-released Lemonade in 2016, the world was in a much more politically restless state than her previous 2013 surprise-release titled after herself. Naturally, Lemonade was timely and relevant to its political climate, while still maintaining Beyonce’s pop culture star power. Turning heads with R&B-influenced “Sorry,” she famously calls out her husband Jay-Z for cheating on her with “Becky with the good hair,” leaving many questioning why anybody would even consider for a second about cheating on Beyonce. While having experimented in several genres before, Beyonce decides to go back to her roots in Lemonade, delving into genres defined by black artists: reggae (“Hold Up”), rock (“Don’t Hurt Yourself”), country (“Daddy Lessons”), soul (“Sandcastles”), and blues (“Freedom”). However, my personal favorite track is “Love Drought,” a haunting deep-cut where Beyonce alludes to forgiving Jay-Z for his infidelity. Closing the album with triumphant “Formation,” an uplifting celebration of black culture, Beyonce further cements herself in pop culture history as a legend of our generation.

1. To Pimp a Butterfly – Kendrick Lamar

Only an artist of Kendrick’s magnitude can have such a perfectly placed discography. In the 2010s, he released one career-capping album after the next, outdoing himself each time, and spewing them out like it was nothing. However, To Pimp a Butterfly is easily Lamar’s best work because of how urgent and timely it is. Album opener “Wesley’s Theory” instantly sends chills down your spine, with Lamar calling out the entertainment industry for ‘pimping’ successful Black artists, the title referencing Wesley Snipes—a black actor who was trapped in a tax-fraud case. In the candid “Institutionalized” Lamar makes a bitter realization that wealth has corrupted him in his rise to fame. “u” sees Lamar at a vulnerable low point, the track opening with chilling screams, showing a metaphorical peek into his head. The magnetic “Alright” has been the face of political protests, crowds chanting its hook as if Kendrick himself was there with them. The album is covered in Lamar’s creative fingerprints with captivating hooks and enticing verses which result in easily the best album of the decade by a mile.

An excerpted version of this piece also appears in our January 2020 print edition.