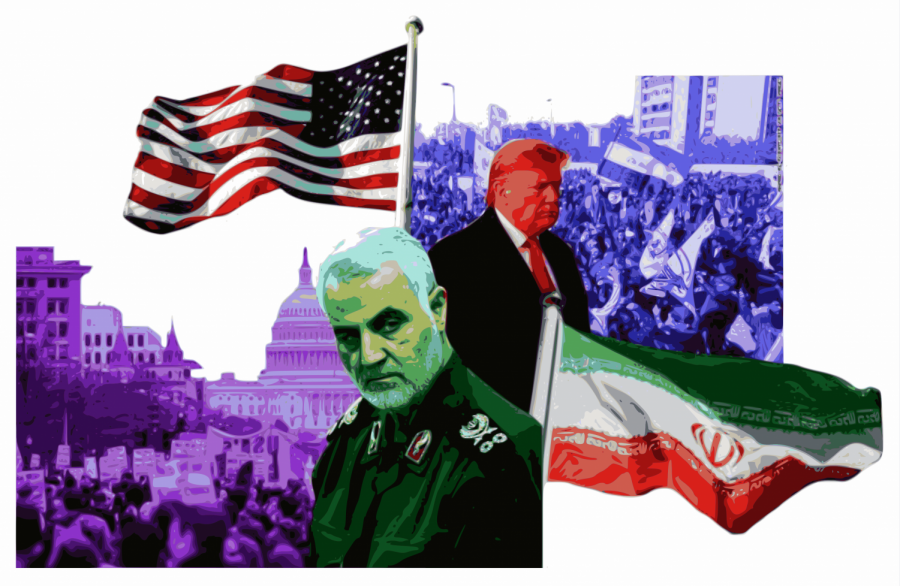 Relations between the US and Iran, long tense and complicated, escalated this past month. On January 3rd, an American drone killed Iranian Major General Qassem Soleimani, commander of Iran’s Quds Force, an organization deemed a terrorist group by the US and several American allies. An Iranian Revolutionary Guard Corps (IRGC) unit, the Quds Force is responsible for secretive military operations outside of Iran. It supports militant groups like Hezbollah, Hamas, and various Shia militias around the Middle East. Soleimani was widely regarded as Iran’s second most powerful man. His killing sparked worldwide concerns about a war between the US and Iran.

Soleimani’s killing constitutes a major escalation in the already tense relationship between the US and Iran, an increasingly strained relationship since 2018 when the US exited the 2015 Iran Nuclear Deal and imposed further sanctions on the country. In late December, tensions increased further when Iran-backed Shia militias attacked a US base in Iraq, killing a contractor and injuring several American soldiers, an event which was used to help justify Soleimani’s death. In response to the attack, militias assaulted the US embassy in Baghdad, with attackers spray-painting “Soleimani is our leader” on a wall. After Soleimani’s killing, the Department of Defense (DOD) stated, “his strike was aimed at deterring future Iranian attack plans.” The DOD said the General was “actively developing plans to attack American diplomats and service members in Iraq and throughout the region” and blamed Soleimani for orchestrating assaults on US facilities in Iraq at the end of 2019.

Many CRLS students disagree with the decision to kill General Soleimani, but there are differing opinions on the man himself and on the Iranian government. CRLS junior Pouya Sadeghpour, who is Iranian said, “Soleimani’s death was a huge escalation, but it doesn’t make much of a difference in how we might  actually free the Iranian people.” He continued, “The death of Soleimani should have been at the hands of the Iranian people, it shouldn’t have been the US president’s decision.” Junior Zane Ghaemi, also of Iranian descent, said, “He was killed because the US hates to see an Iranian spread dignity to those under oppression in the Middle East.”

Although some American politicians supported the strike as necessary for national security, many in the US and worldwide are concerned that General Soleimani’s killing moved the US and Iran closer to conflict. Iran’s supreme leader Ali Khameini vowed “harsh revenge” against the US, a promise he followed by a rocket attack on an American base in Iraq injuring eleven soldiers. No one died from this attack, but the attack made further hostilities more likely. On January 8th, a Ukrainian passenger jet was shot down over Iranian airspace, killing all 176 passengers. Initially, the Iranian government blamed a technical error for the crash, but later acknowledged the plane was shot down by the Iranian Revolutionary Guard in what they claim was due to “human error.”

The incident prompted mass protests in Iran calling for the Supreme Leader to resign. The protests are the most violent since the 1979 Iranian Revolution. Shooting down the Ukrainian jetliner not only had a significant impact on Iran, but it could also jeopardize the nation’s foreign relations. Junior Noah Dreyblatt, an exchange student from Germany, said, “A lot of European countries sympathized with Iran until they shot down that plane—a huge mistake.”

Sadeghpour emphasized, “People need to know there’s a difference between the Iranian regime and the Iranian people. There are 80 million people in Iran and only 10 million support the regime.” He continued, “The Iranian regime is genocidal, so this is a life or death situation for many people.”