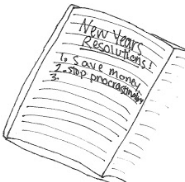 As one year comes to a close and the next begins, people scramble to find New Year’s resolutions and attempt to keep them. It’s a nice thought, really. People want to start the new year fresh, embrace the upcoming year with a fresh face and clear eyes, and better themselves with changes to their lifestyle. Some may pick up knitting or attempt to cut red meat from their diet, while others might go to the gym twice a week instead of once. Despite the seemingly positive sentiment New Year’s resolutions hold, they are infamous for never being kept. And people seem fine with that. They are satisfied with going to the gym only once a week, they enjoy a couple of hamburgers, and they are just so bored with knitting. So, what now? Is there a New Year’s resolution that can be kept? The answer is yes: journaling.

Before the groans and eye-rolls start, let me preface by saying that the extent of the benefits of journaling might be surprising. Some of the more obvious effects of journaling are the psychological ones. Journaling organizes and clarifies thoughts and feelings, which can improve your communication skills. By writing down whatever is on your mind and reviewing what you wrote, you can also get to know yourself better. Although it seems corny, it is eye-opening to finally understand why or how you feel a certain way. Once that happens, the floodgates of self-realization and self-discovery swing open.

Furthermore, journaling can also resolve conflicts, whether inter- or intrapersonal. When journaling, the left side of the brain becomes occupied, allowing the right side to create and feel, removing mental blocks and allowing for the most genuine thoughts and ideas to come out. Somewhere in that stream of consciousness, a solution to a problem might reveal itself. All of this organization of thoughts and feelings causes stress levels to decrease, which, in turn, brings physical benefits. When someone’s stress and anxiety levels are less they can experience better sleep and, sometimes, better immune system function.

Yes, journaling is good for the mind, the body, and the soul, but so is eating less red meat, going to the gym more frequently, and, arguably, knitting. So what distinguishes it from the rest? For one, it is cost-effective, meaning that the benefits of journaling greatly outweigh the minimal costs of buying a notebook and a writing utensil, both of which you probably already have in your house. Additionally, contrary to popular belief, journaling is not time-consuming. In fact, social psychologist James Pennebaker, a professor at UT-Austin, who is considered to be the father of writing therapy, stated in an interview with The New York Times that in order to reap the maximum benefits of journaling, you should journal an average of 3-4 days of the week for 15-20 minutes.

But what about the effort? Some dislike the “work” required to write for that amount of time, and for that often. To that I say: if journaling requires physical and mental effort after the first couple of times, then you aren’t doing it right. Relax, loosen up your brain a little bit. Let your thoughts and feelings flow onto the paper without your own judgment and scrutiny. With every word you write, you are becoming a healthier person mentally and physically, without even owning a gym membership.