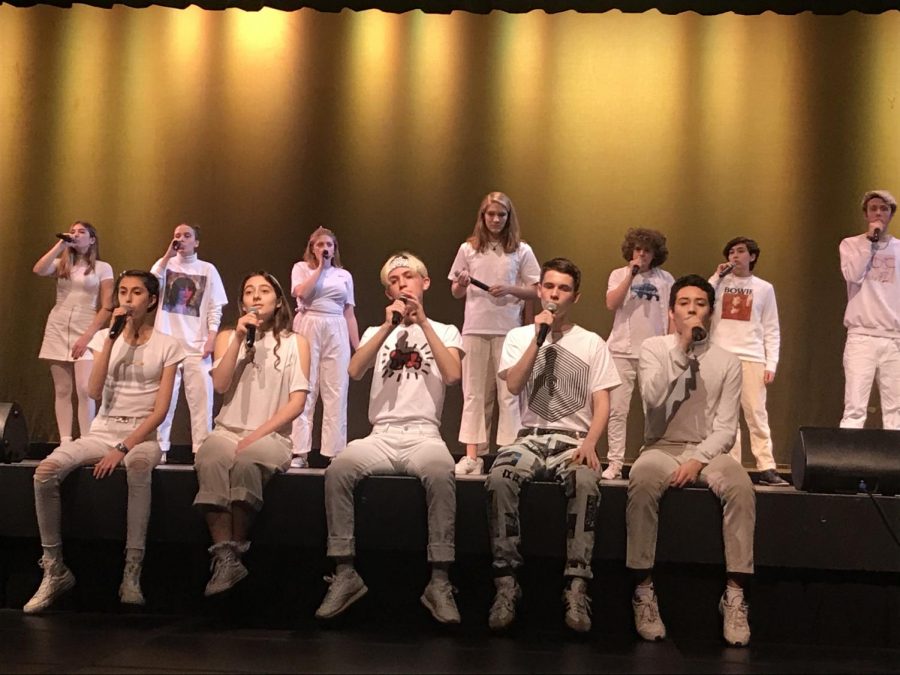 The Winter A Capella Jam occurred on Saturday, December 8th.

At 7:00 PM on Saturday, December 7th, a stream of students and families entered the CRLS auditorium to see the bi-annual A Cappella Jam. The show kicked off with an exciting performance by CRLS co-ed group Pitches and Do’s, who performed “Tears Dry on Their Own” by Amy Winehouse, “Slow Burn” by Kacey Musgraves and “Bust Your Windows” by Jazmine Sullivan. This performance featured not only talented singers but interesting choreography.

The second group to perform was Fermata Nowhere, a new a cappella group formed by CRLS senior Nellie Baxandall and junior Maddie Yu-Phelps. While being the smallest student-led group to perform, Fermata Nowhere held their own and made the audience smile with their opening performance of “Hakuna Matata” from the Disney film The Lion King that featured a stuffed animal and that was followed by an emotional rendition of “Grenade” by Bruno Mars.

The next group to perform was Sassafras, the school’s oldest all-female group. They performed “Daddy Lessons” by Beyoncé and “Dynasty” by Miia. Both of their songs displayed a theme of female empowerment. Sassafras singer Franny Oppenheimer ’20 says, “I thought [our performance] went well and it was super fun!”

Following Sassafras, CRLS invited a guest group on stage from Newton South High School, the Newtones. Their opening song, “How Far I’ll Go” from the Disney film Moana, had almost the entire audience lighting up the auditorium with smartphone flashlights and swaying to the music. This may not have been what the Newtones were expecting, but it looked like they were having a lot of fun on stage.

The next group to perform was the Falcon Fortes, whose members are all in Dr. Stefanov’s a capella class. They sang an a cappella rendition of “The Greatest Show” from the movie The Greatest Showman. This group, in addition to many of the other groups from CRLS, had interesting choreography that kept the audience engaged.

Note to Self ended the high school portion of the Jam with a variety of songs, including a Charlie Puth mashup. Note to Self recently changed its name from Girls Next Door after becoming co-ed this year. This group also featured the only high school male soloists, Noah Johnson ’20 and Jinho Lee ’21. “I only joined A Cappella this year but I’m really glad that I did because it was an amazing experience to perform on the stage,” says Johnson.

One of the co-leaders of this group, Abby Jarcho ’21, says, “I feel like the risks we took with our arrangements and in going co-ed paid off in really satisfying ways. There’s nothing better than producing a piece of music that is as much fun for the audience as it is for us.”

The closing act of the Jam was a performance from Harvard University’s Opportunes. They sang five songs, one of which received a standing ovation that stopped the song before it was over. In between two of the Opportunes’ songs, the A Cappella Jam featured the traditional beatbox-off, where the percussionists from all of the groups joined the Opportunes on stage to display their beatboxing talents.

Co-Leader of the A Cappella program at CRLS Siham Nedloussi states, “As a leader of the program with Leo Kupferberg, we put in a lot of work to have an awesome jam. And we were so happy with the results and it was amazing to see that it was a full house.”

This piece also appears in our December 2019 print edition.